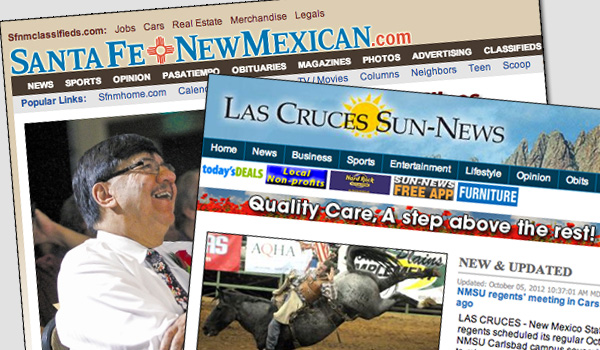 The partnerships ensure that articles produced by NMID reporters will appear in newspapers that are widely read, and that NMID will work with reporters at some of the largest news organizations in the state to produce thoughtful and aggressive journalism for their respective newspapers.

“Partnering with this dedicated group of journalists will be a benefit for all New Mexicans,” said Jim Lawitz, editor of the Sun-News. “It offers the opportunity to deepen our strong journalism traditions across broader platforms.”

Added Rob Dean, editor of The New Mexican: NMID is “home to experienced and intelligent journalists” and “built on independence and non-partisanship.”

“For those reasons, it makes sense for The New Mexican to work jointly with New Mexico In Depth,” he said. “We share a commitment to probing journalism in the public interest and explanatory journalism that can empower our communities.”

New Mexico In Depth will collaborate with staff at both newspapers to produce in-depth articles that will appear in those publications and on NMID’s website. The two newspapers will also share first publication rights with NMID for occasional articles produced by NMID staff, including Executive Director Trip Jennings and Deputy Director Heath Haussamen. A day after NMID and a partner organization publish an NMID article, it will be available for anyone to publish free of charge.

The partnership with the Sun-News also means that articles produced by NMID may be published by other newspapers owned by the Sun-News’ parent company, Media News Group, including the Deming Headlight and Alamogordo Daily News.

New Mexico In Depth hopes to form additional partnerships in the future, and is currently in discussions with other news organizations.

“We can’t wait to begin collaborating with editors and reporters at The New Mexican and the Sun-News,” Jennings said. “By working together, all of us can bring to bear greater resources on stories and issues in the public interest.”

Dean also expressed excitement about partnering, through NMID, with other news organizations around the state including the Sun-News.

“Our hope in forming an alliance among news organizations is that several journalists working together will cover more ground than a single reporter working alone,” he said.

New Mexico In Depth is in the final stages of organization and plans to begin publishing articles later this year.