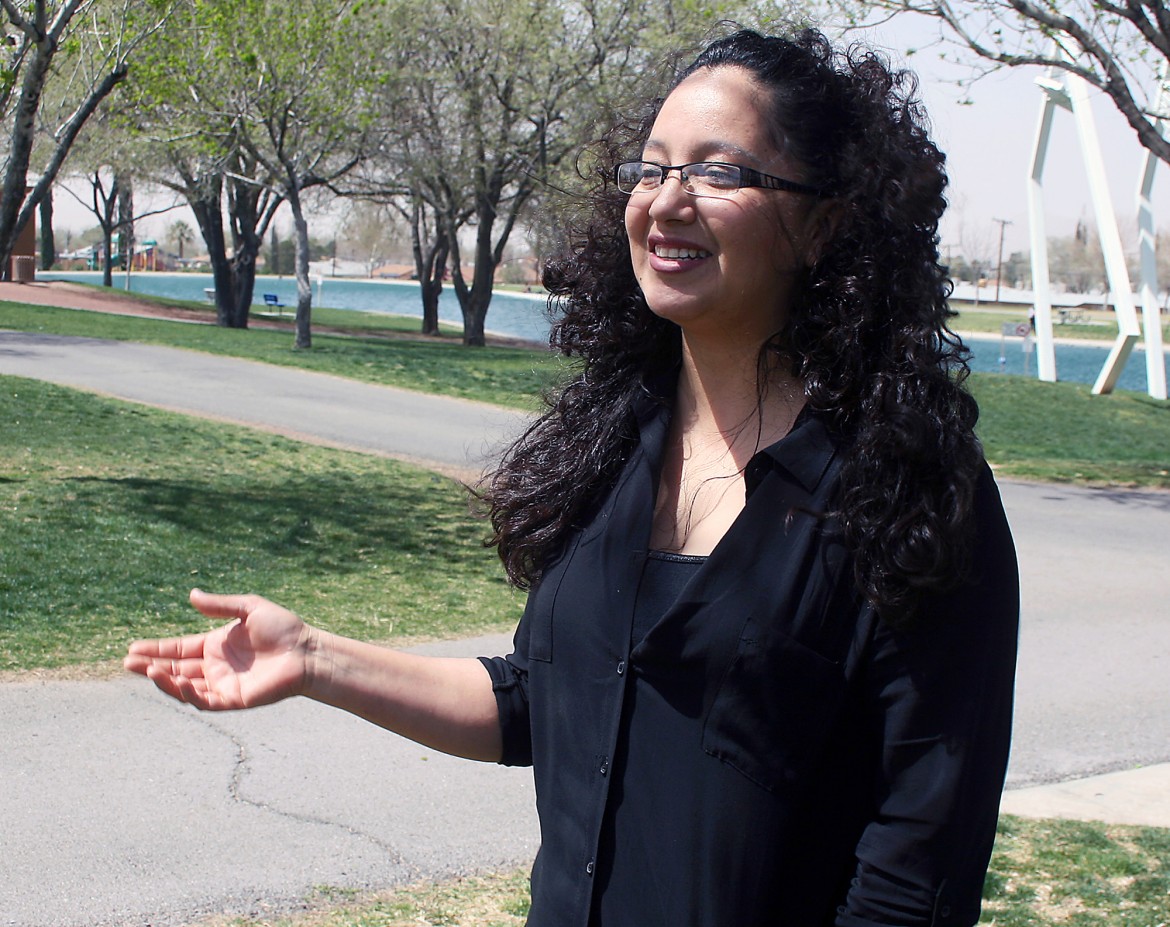 Cecilia Flores recalls the times she spent in Young Park with her children while the family lived at the La Casa domestic violence shelter. Flores’s estranged husband shot her and left her to die in the desert, but Flores survived to help prosecute him, earning a U visa in the process.

Cecilia Flores recalls the times she spent in Young Park with her children while the family lived at the La Casa domestic violence shelter. Flores’s estranged husband shot her and left her to die in the desert, but Flores survived to help prosecute him, earning a U visa in the process.

LAS CRUCES – Cecilia Flores’ “pesadilla” – nightmare in Spanish – culminated in September 2007 when her estranged husband shot her and left her to die in the desert.

She survived instead and became a witness. Testifying against him enabled Flores, who was in the country illegally, to emerge from the shadows and embark on a path to permanent residency.

Her cooperation earned Flores and her son U visas, given to victims of crime and their family members who are in the country illegally and who aid law enforcement in prosecuting crimes.

In New Mexico, both Republican and Democratic district attorneys say they rely on the visas to catch and prosecute violent criminals, like Flores’s husband, Ray Aguilera.

Over the past two years, the little-known visa program has factored in debates in Washington, where congressional members, primarily Republicans, have blocked proposals to raise the annual number of visas awarded from 10,000 to 15,000.

Before he shot her, Aguilera was controlling, Flores said. He wouldn’t let her have a job, friends, a car, a cell phone or leave the house alone, she said during a recent interview at the Doña Ana County District Attorney’s Office.

“I didn’t have anyone,” Flores said in Spanish. “I couldn’t leave. I wanted to leave, but I couldn’t.”

One night, Aguilera was drunk. He went to hit Flores at their home in Mesilla when her oldest daughter, Amy, intervened, Flores said. Aguilera, who is not Amy’s father, pushed her.

Flores realized the abuse had escalated. She was done with the relationship. She put Amy and her other two kids – neither of whom was fathered by Aguilera – in the car and left.

“I didn’t have a plan other than leave with my children,” she said.

Aguilera, a naturalized citizen, called the police and accused Flores of stealing the car and kids.

The police pulled the car over. Officers handcuffed Flores, but once they heard her story of abuse and learned Aguilera’s report was false, they suggested the four head to La Casa, a domestic violence shelter, and arrested Aguilera instead.

One day, Flores arrived at La Casa to discover her younger daughter, Jennifer, being whisked to the hospital in an ambulance. The girl had cut herself. A shelter counselor told Flores it appeared Aguilera had sexually molested her.

Jennifer stayed in Mesilla Valley Hospital for five days, but the doctor advised Flores not to take her back to the stress of the shelter, where she was likely to cut again.

So Flores put her daughter in a foster home.

One day Aguilera called. He wanted to meet to pick up some papers of his she had.

For Flores, life was good. She had found an apartment. She had signed the papers to get Jennifer back and had 48 hours to pick up her daughter. She was starting over.

She agreed to meet Aguilera, borrowing a car from a friend and picking him up at his work. She drove to Burn Lake Park on Las Cruces’ west side so they could talk.

Once there, Aguilera put his hand in his pocket and pulled out a small-caliber handgun.

Flores asked if he was kidding.

“No,” she recalled him saying.

She urged him to think of his own children. Aguilera told her he didn’t care, she said.

She had never seen the serious look in his eyes before, she said, recalling her realization he wanted to kill her.

They struggled over the gun, and Aguilera shot Flores in the chest. She realized he wanted to shoot her again and continued fighting for the gun. She managed to open the window and toss it out. Aguilera got out of the car, grabbed the gun and climbed through the driver’s side window.

Flores got out of the car and walked a few yards before falling. Aguilera picked her up and placed her in the passenger seat. He said he would take her to the hospital but instead turned south onto Interstate 10 toward El Paso.

She recalled him saying, “Todo estará bien, mi amor,” – in English, “All will be well, my love.”

Nothing is OK! She recalled thinking with a small laugh.

Aguilera drove back and forth between Mesquite and Las Cruces several times. He was waiting for her to bleed out, Flores said, before leaving her in the car near Stern Drive and Missionary Ridge, about a mile from the Interstate 10 Mesquite bridge.

Aguilera took the car keys and called a friend to pick him up.

“It’s one thing to know you’re going to die sometime,” Flores said, showing the scar left by the bullet, a small bump above her right breast. “It’s very different to feel it.”

She rapidly flies through that day’s events in Spanish, only pausing to clarify what is lost in translation.

After Aguilera left, Flores searched for her cell phone. She called 911 but couldn’t give the dispatcher her exact location. Mesquite was all she knew.

She stumbled about a mile to the freeway, ready to give up and asking God to take care of her children. But something told her, “You have to walk,” she recalled.

A passing car spotted her, and Flores handed its occupants her phone to speak with the dispatcher. The ambulance found them soon after. It had been about two hours since Aguilera shot her.

Flores had broken ribs and lost a lot of blood. Her heart stopped for nine seconds in the ambulance.

But she was determined to meet foster care’s 48-hour deadline to pick up Jennifer after filing forms to reclaim her daughter.

Her doctor advised her against leaving the hospital so soon.

“It’s not the flu, it’s a bullet wound,” she recalled him saying.

“Would you like someone else to take care of your children?” Flores recalled replying.

The doctor agreed to let her leave if she passed a breathing test. She spent an hour walking to drain the blood from her lungs and another hour practicing the breathing test, thinking of her children.

She passed and was discharged the next day. A local detective accompanied her home, to her children and new apartment — all within the deadline.

Aguilera went to trial for trying to kill Flores and molesting her daughter. He was convicted in both cases, on charges of criminal sexual contact and penetration of a minor and first-degree attempted murder, kidnapping and tampering with evidence. Aguilera received 28 years in Flores’s case and 6 years in Jennifer’s, to be served consecutively. Now 48, he is in the Guadalupe County Correctional Facility.

Flores now works as a home caregiver and in school cafeterias under the work permit provided by her U visa. She shares her story at La Casa’s group therapy sessions, urging residents to overcome their pasts, like she did.

“You always have to keep fighting,” she said.

Flores said she feels like she’s lived 100 years with all she’s been through.

“La vida es corta,” she said, while chattering about thanking God for each beautiful day.

It means life is short.

Lindsey Anderson is a reporter at the Las Cruces Sun-News.