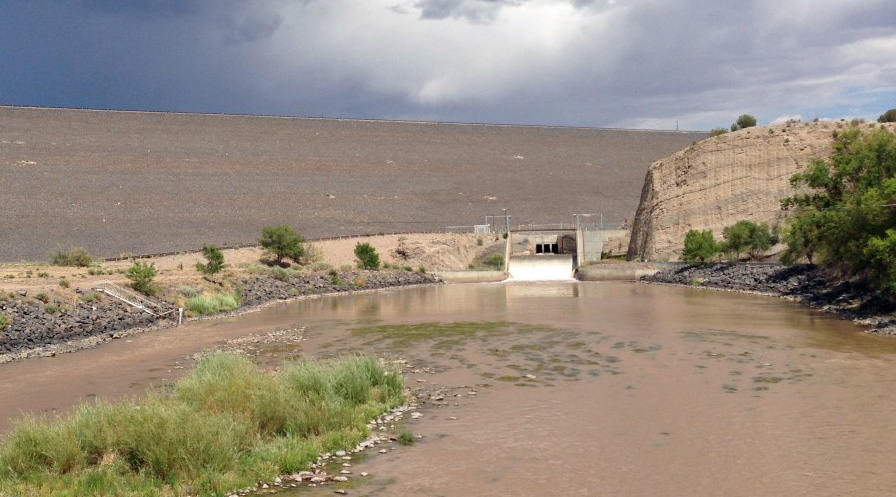 Driving back from Santa Fe recently, I took the long way home. Frequently, I write about water and drought, and it’s helpful to actually look at the Rio Grande and its reservoirs on a regular basis. Pulling off I-25, I headed toward the Pueblo of Cochiti.

As I crossed the Rio Grande, the view ahead yielded an enormous dam rising alongside the road.

Cochiti Dam is one of the 10 largest earthen dams in the United States. It contains more than 65 million cubic feet of earth and rock, stretches more than five miles across, and rises about 250 feet above the Rio Grande.

Driving past the dam on my way to check out the reservoir’s waters I was reminded of a talk the Pueblo of Cochiti’s Regis Pecos gave a few years ago.

(That talk was reprinted in the University of New Mexico School of Law’s Natural Resources Journal in 2007. And in the interest of full disclosure, I should say that I’ve written about water for the Utton Center, the center that hosted his talk.)

Caught up in the fray of drought and the politics of water — managers today have to balance the needs of cities, farmers and endangered species that depend on the river’s water — it’s convenient to overlook how the current system irrevocably changed the relationship Native communities had with the Rio Grande. Cochiti is just one of the tribes in the Middle Rio Grande that has been affected by more than a century of federal dam-building and river-tinkering.

But nowhere in the valley does there stand such a stark reminder of how federal water policy and Native communities are intertwined. As Pecos stated:

“Construction of Cochiti Lake is not a single, isolated issue. It was complicated by a number of other circumstances, which all converged and culminated in ways that were just incredibly devastating and in the most tragic way led to our fight for survival.”

Congress authorized construction of the dam as part of the Flood Control Act of 1960, and over opposition from many tribal members, the U.S. Army Corps of Engineers built Cochiti Reservoir between 1965 and 1975. The lake inundated sacred lands as well as fields the tribe had tended for centuries.

“As issues of resistance were met with the threat of condemnation, the elders conceded to the construction of Cochiti Lake but pleaded that if it was going to happen that a single request be adhered to. The one request was that, if no other areas could be protected, the only place that we wanted protected was an area very important to many pueblo people, one of the most revered places of worship.”

But, as Pecos recounted:

“As the elders conceded and succumbed to the incredible political pressure of condemnation of the land and construction of the lake, it was painful to see the elders, members of our community, full of emotion, full of tears, and reflections of a sense of helplessness in their eyes and faces. They spoke with a deep sense of hurt that they had failed as the stewards and the protectors of this incredible, beautiful, and sacred place to our pueblo people. It was the heart of what gave meaning to our lives. It was very painful for me to witness this helplessness. All my life I had seen these same men with a sense of wisdom and vision, strong spirited, always acting with a sense of certainty and assuredness. Now they were reduced to this helplessness. I had never witnessed such hopelessness. It was frightening. The future seemed uncertain. This was one of the most tragic episodes in recent history for the people of Cochiti.”

The dam is an engineering marvel, and one that helps control any floodwaters and sediment that might tear down the Rio Grande. It’s also used for recreation and to store water for endangered fish living downstream. But it also looms — and I mean looms — above the Cochiti reservation. Construction of the dam and inundation of the lake had a profound impact on those living at Cochiti, Pecos said:

“Everyday, on my way to school, we saw the earth ravaged by bulldozers. Every night we would see the lights equal to several football fields lit up and would hear the trucks make the funny beeping sounds. We went to sleep hearing the destruction of our heartlands. We would wake up to this for more days and weeks and months than I care to remember. In retrospect, I represent the generation who may have been the last to have grown up alongside of our grandfathers, grandmothers, and our parents working the land while learning about our way of life in that kind of traditional agricultural community. To see those places where we had played, the places that had nurtured us through all of our life experiences to that point, destroyed was traumatic. When the gates closed, we watched the remainder of the available agricultural lands become flooded by the seepage from Cochiti Lake.”

In tandem with the dam’s construction, developers envisioned a privately owned, 400,000-person town smack inside the reservation, which was considered close enough to Santa Fe, Los Alamos and Albuquerque to draw visitors and second-home buyers. According to Pecos, that proposal tore apart the community and created a “new set of dynamics that would break from the past unified stronghold to resistance:”

“It became a classic example of external interests using those internally to break down resistance. This form of exploitation came at great cost culturally, socially, politically, and economically to a small undeveloped and underdeveloped tribal community. Without a clearly articulated vision, the proposed development tore apart our once tightly knit village. It caused a great deal of divisiveness that no economic development benefit could ever make up for. This all led up to the classic story about brother against brother, brother against sister, and father against grandfather. It was a very painful part of our experience. I can remember discussions between my father and my grandfather about what was to happen to our little community of less than 1,000 people. And I imagine that in every other home similar discussions were taking place with respect to resisting the development and construction of the reservoir to be known as Cochiti Lake and those advocating for the development producing incredible pain internally in our community.”

The tribe was able to block the development plans. In the 1980s, it acquired the town and in the 1990s it created the Cochiti Community Development Corporation. According to the town’s website, it today hosts about 400 residents.

In recent decades, the Army Corps of Engineers and the tribal government have come to terms with their shared history over the dam, and are trying to understand more about the impacts the dam has had on the pueblo.

The day I visited, flashing thunderheads built north of the lake. A few boats headed toward the shore. Perhaps it was just the coming storm affecting my mood. But this place felt as though it’s experiencing yet another transition.

New Mexico is in its third year of drought and the Rio Grande’s flows are low. Debris laps against the shore and the lake is muddy with sediment. Stripped of stable vegetation, the burn scars from fires to the north — including the Las Conchas fire two years ago — can’t hold the topsoil down. Summer monsoons are cause for celebration. But the heavy rains slalom mud down the slopes; the sediment clogs canyons that drain into the Rio Grande and the reservoir. History is always shifting; this time, the climate is changing, too.

By writing this, I’m not trying to dredge up bad feelings or painful histories. But those of us downstream should know something of the history held behind that earthen wall.