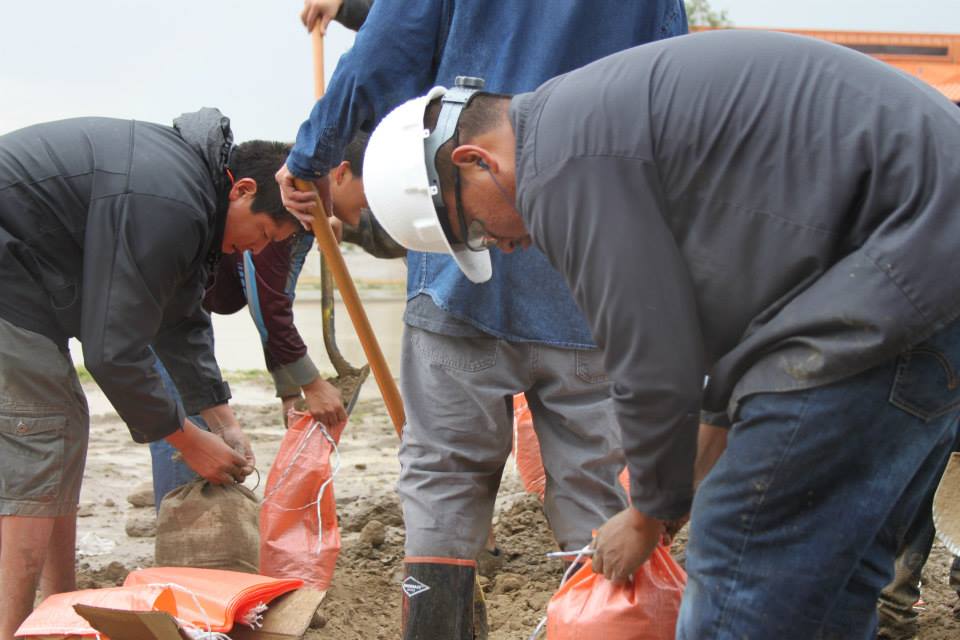 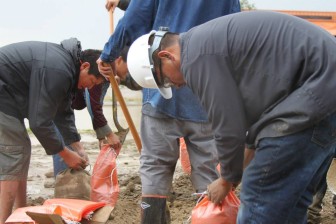 When September’s heavy, prolonged rains sent floodwaters rushing down streambeds and arroyos and into towns and homes, many of New Mexico’s rural, American Indian communities found themselves inundated with mud and water. After natural disasters, the federal government steps in, assessing damage and allocating funds — and at the end of October, President Obama again ordered federal aid for flood victims in New Mexico.

But as some communities are finding, an infusion of federal cash into the state doesn’t mean immediate changes on the ground.

With new flood disaster funding on its way from the feds, almost $12.5 million from 2011 and 2012 remains unspent in a special account. Until Friday, that number was closer to $15 million. After NMID spent six weeks calling and requesting documents from state and federal officials to understand why the money – most of it designated for Santa Clara Pueblo – remained unspent, the state announced Friday that it was making $2.8 million available to the pueblo, which has been repeatedly hit by floodwaters.

For three summers running, communities downstream of burn scars from the 2011 Las Conchas fire have experienced severe flooding. In particular, the Pueblo of Santa Clara has had its watershed wiped out — and with each rainstorm, residents of the pueblo watch the soot and soil from the Jemez Mountains wash down their canyon.

When monsoon rains follow fires, major flooding ensues downstream. (If you doubt the intensity of such floods, check out these three videos from 2011.) With no vegetation left to secure soil in place, rainwater tears off the mountainsides and chokes canyons with debris.

“We have a large hill right above us, so when water runs down, it inundated our irrigation ditch,” Tribal Sheriff Regis Chavarria told me in September. “That was filled to capacity, with debris clogging some of the culverts, then the water comes out of the ditches and runs down the community proper.”

Most recently, in September Santa Clara’s health clinic was flooded. The tribe had to shutter it and transport people to Santa Fe for doctor’s visits and prescriptions. (The Santa Fe New Mexican just reported on some of that damage from the fall.)

Chavarria also pointed out that getting funding to fix the problems isn’t easy. “There is a great deal of work that needs to be done,” he said. “The major focus is put on debris removal. Then some of the water-holding facilities need to be modified and repaired so that they can function as they’re intended: to hold back water and slow down the velocity of the water coming into the community.”

Despite presidential disaster declarations in 2011 and 2012, funds to the tribe are just beginning to trickle in from the state, Chavarria said in September.

Once the federal government allocates those funds to the state, New Mexico is responsible for “picking up the process,” says Stephanie Moffet, the Federal Emergency Management Agency’s Region 6 external affairs representative. Despite the fact that tribes are sovereign nations, they are considered subgrantees, and the money must move from the feds through the state’s Department of Homeland Security and Emergency Management.

The process for moving money from the feds through the state and on into communities is complicated, says Williams, who jokes he’s the busiest man in the state right now.

After a disaster has been declared and FEMA has done its assessments (to figure out what’s been destroyed or damaged, how it was destroyed or damaged, and what it’s going to take to fix it), projects are categorized as either small or large. Small projects are relatively straightforward: They demand less funding and don’t require that environmental or historical studies be completed.

Under the National Environmental Policy Act and the National Historic Preservation Act, federally funded projects that may affect environmental or cultural resources can require costly studies and sometimes, mitigation.

On smaller projects, once the work has been completed and documented, New Mexico pays the state share and releases the federally obligated funds, says Williams.

Larger projects are even more complicated. “New Mexico recognizes that many — virtually all — our applicants simply don’t have the cash to even get started with projects,” says Williams. “We provide half the fed share, and half the state share upfront.” (And if the project ends up costing more than anyone had planned during the assessment stage, the state can request additional funds from FEMA.)

Williams agrees with Chavarria that money is being held between the feds and the state. But, he says, the implication that the tribe can’t get work done isn’t fair. “They haven’t completed the large projects which they’ve been funded for already,” he says. “They have $7 million already, and if they need more money, they just need to show me what they’ve done with that seven million.”

Part of the challenge has to do with the fact that Santa Clara Pueblo has been flooded three summers in a row, which makes designing new projects a challenge, says Williams. For example, the tribe needs to repair the road into the pueblo. “Where are they going to put it? It’s probably not going to be possible to restore the road to its historic alignment—it’s now basically a river,” he says, adding that planning a new road would involve complying with environmental and historical laws. “That big project is almost $10 million. It’s not obligated because it hasn’t even been designed.”

He’s sympathetic to the fact the tribe is dealing with forces far out of its control — and events, like wildfire, beyond their boundaries. “It’s horrifically destructive and genuinely life-threatening,” he says. “But, the pueblo has received a generous amount of the funding up front. The State of New Mexico has paid half the federal share and half the state share, up front. If this were (a state like) Arkansas, they wouldn’t have gotten anything.”

Moreover, Williams points out that the tribe has received tens and tens of millions of dollars. “The per capita revenue stream is enormous,” he says. “I’m not sure I would concur with (Chavarria’s) pleading poverty.”

Resiliency, rather than resources

I stumbled onto the backlog of federal funds because I was curious how the state’s tribes had fared during September’s downpours.

With nothing much worse than a chronically leaky roof myself, I spent Sept. 17 and 18 calling around to the state’s 22 tribes. Some officials didn’t answer calls; some tribes weren’t affected too badly. Others, like the Pueblo of Sandia, refused comment. But many governors and emergency management officers were able to give me a snapshot of what happened when severe and prolonged rainstorms hit the state in early to mid-September.

Some tribes, including the Pueblo of Zia, already suffer from a lack of infrastructure — a problem that becomes all the more severe when there’s a natural disaster. At the Pueblo of Santo Domingo, the rains damaged homes, roads and culverts. Many roads washed out, some were closed — leaving people stranded and worried about how they might pick up their schoolchildren.

At the Pueblo of San Felipe, Tribal Administrator Debra Halland described washed out roads, water that had breached arroyos and berms, and roofs that had caved in or leaked. The tribe also had to release water from a dam on the east side of the village. “It didn’t breach, but we had to release a lot of water, and it flooded entire agricultural fields,” she said. “A lot of irrigation ditches were muddied over and some people’s crops were destroyed.”

The Navajo Nation, which had experienced flooding since late July, was also hit hard in September. According to spokesman Erny Zah, 60 of 110 chapters requested assistance from the tribe due to flooding. In Crownpoint, an earthen dam on a normally dry arroyo had to be drained with a makeshift spillway to prevent it from breaching. But the biggest problems, according to Zah, were washed out bridges, culverts and roads.

Though the flooding caused problems, Zah says first and foremost, the Navajo are thankful for the rain. “When you live in an arid or semi-arid climate, flash flooding is just a part of the monsoon season,” he says, noting that this year’s monsoons delivered more than twice what they have in recent years — and they were a blessing considering the region’s long-term drought. “Those of us who live in areas where flash flooding does occur, there’s a heightened level of awareness that it’s a part of our landscape.”

Meanwhile, in Santa Clara, Chavarria says the people of the pueblo are resilient and adaptable. Nature’s ways have supported Native people and also challenged them. But most of all, he says, Mother Nature has made the people of Santa Clara who they are today.

“The Santa Clara people have nowhere to go, and we don’t want to go anywhere else. This is where we’ve been asked to live and protect,” says Chavarria. “The people, the community, they know the hardship that comes along with living within this community, and everyone comes together.”

One thought on “Are New Mexico’s tribes being flooded — then left high and dry?”