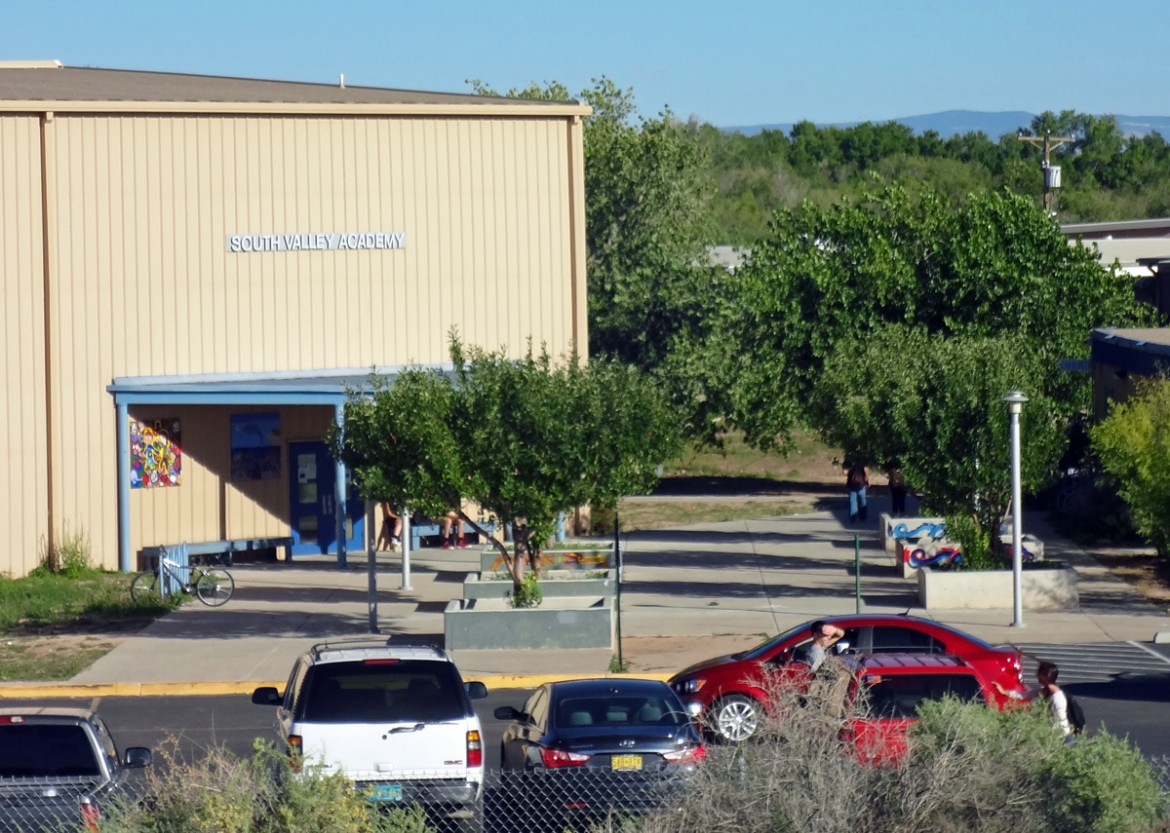 South Valley Academy Principal Katarina Sandoval says she has picked up the phone at all hours, including “5 o’clock in the morning phone calls from students saying, ‘Miss, ICE is here at my trailer. They’re beating down my door. Do I let them in?’”

New Mexico has a unique culture of tolerance, especially when it comes to immigration. Nearly half of the state’s residents identify as Hispanic or Latino, and a strong Hispanic influence has existed for generations, since the Spanish arrived through Mexico. As the federal government stepped up enforcement of immigration laws in recent years, deportations reached into communities and families across New Mexico.

Deportation and children:
This story, the first in a two-part series on the toll deportation can take on the children who are left behind, was produced by New Mexico In Depth in collaboration with multimedia partner Fronteras: The Changing America Desk. You can also listen to Part 2.

Immigration and Customs Enforcement (ICE) officially targets criminals in deportation policy. About 55 percent of deportations in fiscal year 2012 were for individuals with prior criminal convictions. But the impact on families has been more difficult to quantify.

David Varela is a senior at the South Valley Academy just outside Albuquerque. He found out last year that his parents and grandmother are living in the United States without legal status.

“What would happen with my family if they ever get deported?” he asks. Now that he knows, David says it’s hard to keep the possibility his family members will be deported out of his mind: “What am I going to do, where am I going to stay? I don’t know if I could ever survive without them.”

This sense of anxiety is realized by many students here. Senior Ingrid Nordoñez has a cousin who was deported. She saw his family struggle and says some of her friends at school know deportation could change their families too. When she talks about it with friends, she says they tell her “how they’re going to be struggling with the money. They’re going to miss their parents.”

The South Valley is a farming community. Most students at the South Valley Academy come from immigrant families. Some were born in the United States and are citizens. Others were brought here as children and grew up without legal documentation. The focus of this charter school is college preparation in a mostly low-income area.

But life outside the classroom can get in the way. The staff is ready for that.

The principal of South Valley Academy (pictured here) says she has picked up the phone at all hours, including “5 o’clock in the morning phone calls from students saying, ‘Miss, ICE is here at my trailer. They’re beating down my door. Do I let them in?’”

Teachers and social workers give out their phone numbers to students. Principal Katarina Sandoval says she takes calls at any hour. Some of those calls are related to the immigration status of students and their families.

Sandoval says she has picked up the phone at all hours, including “5 o’clock in the morning phone calls from students saying, ‘Miss, ICE is here at my trailer. They’re beating down my door. Do I let them in?’”

Researchers estimate 85,000 immigrants live in New Mexico without legal status. It’s not as large a population as in Texas or California, but New Mexico only has about 2 million residents, so their presence is familiar here.

School social worker Veronica Romero de Chavez says coping after a parent or family member is deported can take a heavy toll on students. She says she sees a lot of emotions among students.

“There’s grief, loss, there’s the depression and it’s situational and then it’s long term,” she says.

David Bryant is an English and drama teacher. He says he sees the impact in the classroom.

Bryant says this means he sometimes has to take on more than what’s normally expected of a teacher.

Summer Ramos attended the South Valley Academy and now works as a social worker at the middle school. She says the school offers students a safe space to talk about immigration concerns.

“It’s an environment where it’s allowed to be spoken about and they have other people they can relate to,” she says.

The school offers counseling for families and invites in lawyers who can advise parents and young people on applying for deferred action or other relief from deportation. It’s all to try to help keep the students’ minds on academics, not immigration status.