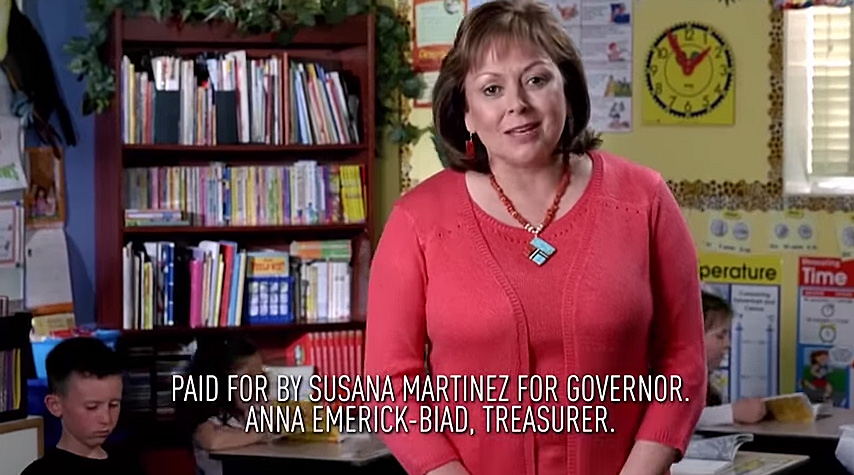 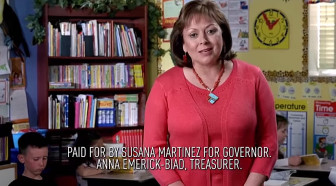 At a cost of $12.2 million, New Mexico candidates and political action committees aired 260 hours of commercials on traditional TV stations across the state for the 2014 election.

Republican Gov. Susana Martinez accounted for one-fourth of that advertising — $3.1 million — despite facing Democratic Attorney General Gary King who spent only about $583,000.

“She had a lot of money to spend, so it makes sense to spend a lot of money,” said Lonna Atkeson, a political scientist at the University of New Mexico. “It’s a good way to reach a lot of voters.”

Each week this fall, New Mexico In Depth analyzed TV ad contracts – 770 in all – filed with the Federal Communications Commission by stations in Albuquerque, El Paso and Amarillo, Texas – all stations that reach New Mexicans. The analysis included the amount of each contract, the number of spots purchased and the candidate or committee buying the ads, along with other information.

This analysis differs from others because it is based on actual contracts with TV stations instead of a formula estimating what ads cost.

The New Mexico In Depth analysis doesn’t include satellite or cable TV ad buys because the FCC doesn’t require them to file contracts.

TV advertising is one of the biggest, if not the biggest, expenses for many candidates’ campaigns and the avenue most often used by political action committees and other outside groups to reach voters in the highest profile races.

“We’re certainly not at a point where TV advertising is being eclipsed by online media and social media and all that stuff,” said Travis Ridout, a political science professor at Washington State University and co-director of the Wesleyan Media Project, which tracks TV political advertising.

For the Martinez campaign, TV was among the biggest campaign expenses, and many of those ads attacked King, which is unusual, Ridout said.

“It does sort of strike me as contradictory to our usual story, which is that if you’re ahead and your opponent can’t afford to get their name out there, you certainly don’t want to do it for them,” Ridout said.

Atkeson agreed, suggesting that the campaign might have had other motives.

“Usually if you’re way ahead you tend to stay positive,” she said. “Maybe it was a strategy to lower voter turnout.”

According to the New Mexico Secretary of State’s website, 40 percent of New Mexico’s eligible voters turned out for the 2014 general election, the lowest rate in years. In contrast, when Martinez won election four years ago in 2010 as governor, turnout for New Mexico voters reached 53 percent.

Midterm elections generally favor Republicans. According to the Cook Political Report, a respected Washington outfit that provides political analysis, midterms have always drawn older voters, and usually drawn white voters, to the polls in disproportionate numbers — two demographic groups that help make up the GOP’s base of support.

At the same time, New Mexico’s Democratic leaning voters this year were less enthusiastic about their line up of candidates, according to a Nov. 5 Associated Press story in which prominent New Mexico pollster Brian Sanderoff was quoted.

Candidates such as Martinez, who is mentioned as a potential 2016 vice presidential nominee, also often are looking to the future, Ridout said.

Martinez defeated King 57 percent to 43 percent, winning all but five of the state’s 33 counties.

“He somehow managed to inform voters about an issue that really hit at their heart,” she said. “It resonated with people because people know about those orchards. It really feels like a New Mexico thing.”

Here’s a look at TV ad buys for all the candidates for statewide offices. The amounts include spending during primary races.

Neither candidate in the 3rd Congressional District advertised on traditional TV.

Here’s a look at TV ad buys by the Senate and House candidates:

Nationally, outside spending played a huge role in U.S. Senate races and many gubernatorial races, often exceeding spending by candidates.

That influence was smaller in New Mexico — about 13 percent of the $11 million in general election ad buys.

Here’s a look at outside spending on TV contracts in the general election:

What can New Mexico expect in 2016? Potentially fewer ads, since there won’t be a U.S. Senate seat or statewide races in play. The results in this year’s congressional races seemed to indicate the three seats are relatively safe.

But heated battles for control of the state House and Senate could steer more money toward TV in such races.

And the 2016 presidential race could bring plenty of ads to New Mexico if it’s considered a swing state with a Republican governor and state House that’s balanced by Democrats in four of five congressional seats.

Atkeson noted that while Obama won New Mexico by a large margin in 2012, Martinez and other state-level Republicans were similarly successful in 2014.

“I’ve really been thinking about that a lot,” Atkeson said. “Those mixed messages between 2012 and 2014 make me think we have the potential to be a swing state in 2016 and that we’re definitely not solidly blue.”