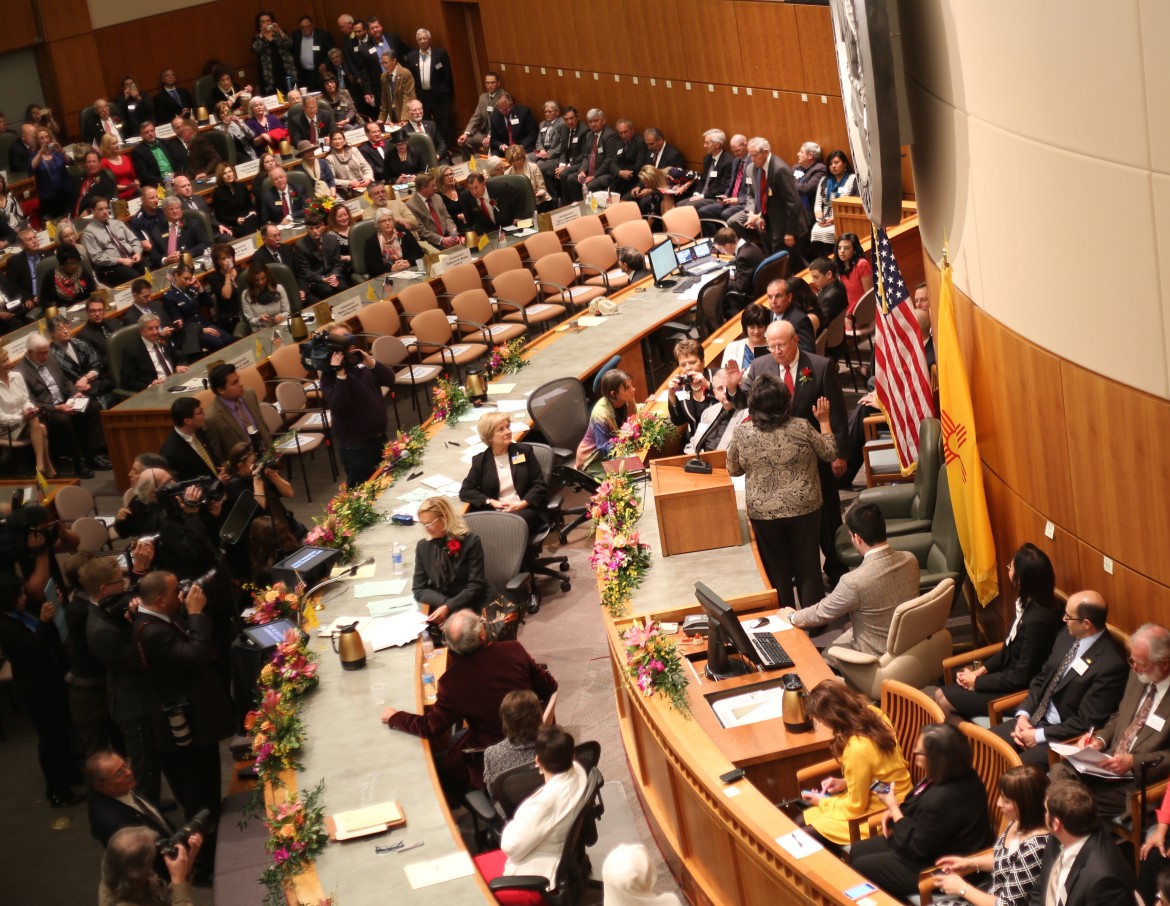 Rep. Don Tripp from Socorro makes history Tuesday as he takes the oath of office as the first Republican Speaker of the New Mexico House of Representatives in 60 years.

With their takeover of leadership in the New Mexico House of Representatives for the first time in 60 years, Republicans likely improve their chances of passing legislation.

Before the session started on Tuesday, House Republicans were nearly equal with their Democratic counterparts in terms of the number of bills they pre-filed through Jan. 16.

But in the past five years, only about 13 percent of bills introduced by House Republicans made it to the governor’s desk, compared with 21 percent sponsored by their Democratic counterparts.

Republicans fared better in the Democratically controlled state Senate between 2010 and 2014, passing 24.5 percent of bills introduced, compared with 21.2 percent for Democrats.

Nationally, 20 percent of bills introduced in state legislatures in 2013 were passed, according to the National Conference of State Legislatures. That year, 18.3 percent of New Mexico’s bills passed both chambers and became law after winning the governor’s signature.

Still, in both New Mexico houses, Democrats introduced far more bills than Republicans, and saw more than twice the actual number of bills pass both chambers and get to the governor than their GOP counterparts.

“The expectation is that because the majority party controls the agenda, they can control the flow of legislation out of committees and on the floor,” said Peverill Squire, a University of Missouri political scientist and senior editor of Legislative Studies Quarterly. “They can make it much easier for bills they support to pass.”

One caveat on these House bill statistics: they don’t include 19 bills introduced and five passed in 2011 and 2012 by Rep. Andy Nuñez, who switched his affiliation from Democratic to unaffiliated in 2011. After being defeated in 2012, Nuñez was reelected as a Republican in November.

Of course, getting a bill passed doesn’t mean it became law. Of the 870 bills that went to the governor between 2010 and 2014, 200 were vetoed. Of those 200 vetoed bills, 109 were “pocket-vetoed,” meaning the governor simply failed to take action on a bill approved by the legislature, allowing it to die.

Squire said House Republicans can expect to get sponsorship requests from lobbyists, state agencies and others now that they’re in the majority. But working with a Senate that has a Democratic majority could pose a challenge.

“Some compromises will have to be reached,” Squire said. “They’ll probably agree on those things that have to get passed – the budget – and those things that are contentious between the two parties will fall to the wayside.”

Former state Sen. Dede Feldman, an Albuquerque Democrat who wrote about her experience in a book, agreed.

“They’ll certainly have more success in getting things passed through the House,” Feldman said. “The question is can they get them through the Senate? That all depends upon whether they are able to make an alliance with the leadership in the Senate.”