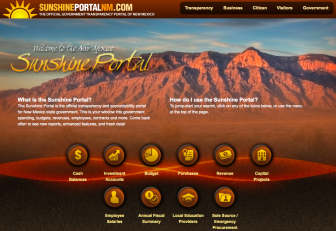 Scanned copies of all state contracts should be available on the Sunshine Portal, say two lawmakers who are proposing an update to the state transparency website.

Posting original documents would give New Mexicans a bigger window into state contracts, something that’s important to business owners, says one of the bill’s sponsors, Sen. Sander Rue, R-Albuquerque.

Right now, some contract information is online, including the basic details from purchase orders: the purpose of each contract, the name of the vendor and the amount paid.

“It is the small business community that has clamored for sunshine because they want to know all of the bidding process is above-board and competitive,” Richard said Wednesday. “They want to know that they’re not being artificially shut out of the process because of some behind-the-door deals.

The bill is supported by the New Mexico Association of Commerce and Industry and the state General Services Department, which handles the contracts.

Although some information, such as trade secrets in technology contracts, will have to be redacted, the process of adding contracts to the Portal should go pretty smoothly, said Estevan Lujan, the public information officer for both General Services Department and the Department of Information Technology.

According to the bill, by Jan. 1, 2016, the Sunshine Portal will have to include the following information:

·      the amounts expended on the contract;

·      a copy of or an internet web site link to a copy of the contract document, including

To listen an audio version of this story that ran on NMID’s media partner, KUNM, click here.