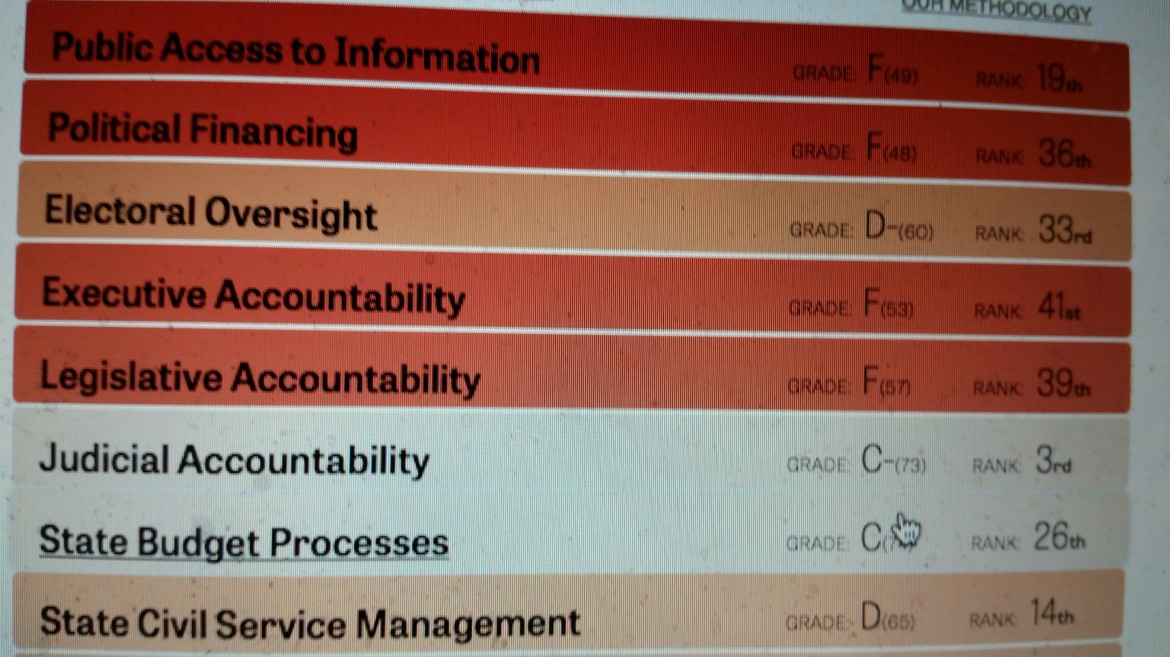 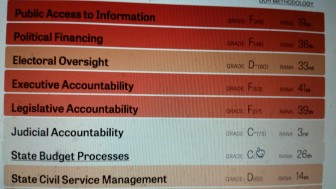 It’s become habit in New Mexico to groan about incompetence and corruption in state government as though it’s something terrible—but out of our control. Ugh, these politicians. What can you do?

The barrage of scandals has been numbing. In the last three weeks, our  secretary of state pleaded guilty to felony embezzlement and the State Police opened an investigation of a former New Mexico Public Education Department official. Over the weekend it was reported that the FBI is investigating  the fundraising activities of Gov. Susana Martinez’s top political consultant—and allegations that the state Taxation and Revenue Department may have issued retaliatory audits of the governor’s political enemies

That’s an awful lot to shrug off.

This data-driven assessment of state government I conducted for the Center for Public Integrity and Global Integrity shows that New Mexicans do have reason to be concerned—there are some serious problems with the way our state deals with regulating money in politics, checking out charges of unethical behavior and making sure the public has access to the records of government.

New Mexico’s Integrity Gap
Read the other articles in this series:

New Mexico scored only 61, a letter grade of D-, and tied for 34th place in the 2015 State Integrity Investigation, a 50-state analysis of accountability, ethics and transparency in government, released across the country today.

New Mexico is not particularly unusual in having these kinds of problems, the report found; only three states scored higher than a D+ overall. But looking at the high scores in some of these categories shows that change is possible, and it gives citizens and elected officials some solutions to consider—instead of just shrugging their shoulders

Here are my main takeaways after conducting dozens of interviews, reading reams of news stories and analyzing a pile of independent reports.

First, of all 50 states, New Mexico has the biggest “enforcement gap.” That’s the difference between its laws (some of which are quite effective) and the way they’re enforced (which critics say is sometimes not at all).

Add together systemic weaknesses in oversight and poor enforcement — and you can see how it could be pretty easy for bad actors to get away with breaking the rules here.

New Mexico is often recognized for having some of the best freedom of information laws in the country. But its flaws leave the public and the media acting as watchdogs with not enough teeth to frighten a kitten.

There’s no hard deadline to produce records, and the attorney general’s office (which provides legal representation to public bodies) has never made enforcement a priority. Lawyers in the AG’s office put Inspection of Public Records Act and Open Meetings Act complaints at the bottom of the stack and fines are almost unheard of. Frustrated members of the public must pay lawyers to sue in order to get the records and access they’re entitled to. So the government can effectively skirt the law simply by repeatedly ignoring requesters and delaying their responses.

The same thing happens with oversight of money in politics. The secretary of state’s office is responsible for collecting reports from candidates, political parties, committees and lobbyists, but how or when people get punished when they break the rules isn’t very clear.

The secretary of state rarely levies or collects fines and the law says that the attorney general is the one who can prosecute offenders. But the flaws in this system were laid bare in September when embattled Secretary of State Dianna Duran sent 31 campaign finance complaints to Attorney General Hector Balderas and asked him to investigate. He sent them back, saying his office couldn’t help her while it was investigating her for lying on her own campaign finance reports.

Perhaps more importantly, the state Legislature has failed to address loopholes created by the U.S. Supreme Court’s decision in Citizens United, meaning rivers of money flow virtually unimpeded—and untraceable—into the political system here. Although Super PACs are technically prohibited from “coordination” with candidates, state law doesn’t define what coordination means. So they can raise and spend money on politics knowing no one will stop them. For example, in 2014, Gov. Susana Martinez’s operations director, who is also married to the governor’s deputy chief of staff, left her office to run New Mexico Competes, a PAC supporting the governor. The group ran radio ads praising Martinez and sent mailers criticizing a school superintendent who had irked her. Although a former Martinez fundraiser told National Journal that the governor’s political adviser said he was behind New Mexico Competes, the adviser and the governor deny any involvement. But enforcement was left to the discretion of the elected secretary of state, who like her predecessors, said her focus was on education, not enforcement. And nothing happened.

Here’s another observation I took from the report’s rankings: Some states have figured out better ways to protect the balance of power between the people and their government. They’ve come up with more effective ways to deal with campaign finance, more transparent ways to figure out if allegations of corruption are true, more efficient ways to make sure when citizens ask for public records, they get them.

For example, after the inaugural version of this report was released in 2012, Iowa created an independent group to oversee freedom-of-information disputes. This year, Iowa was ranked first in the nation for access to information.

Which brings us to New Mexico’s weaknesses in overseeing ethics.

New Mexicans overwhelmingly say they think their politicians are corrupt. Could that be in part because we have no transparent, public mechanism for investigating and resolving ethics complaints? If no one is ever thoroughly investigated and found innocent, the public is left to believe they’re all guilty.

When former state Sen. Phil Griego orchestrated legislative approval for the sale of a piece of state property in Santa Fe, voted to approve the sale and then took a $50,000 commission for brokering the deal on behalf of the business who bought it, he was allowed to serve for eight months after the allegations were made public, then resign rather than face any reprimand. Griego admitted he violated the constitution, but said it was unintentional.  The day of his resignation, leadership of both parties and both chambers of the Legislature released statements saying they had no comment—and explaining that they’d asked their members not to comment either. Immediately after resigning Griego began drawing a legislative pension of $1,300 per month.

Groups like Common Cause have tried for years to get the state Legislature to approve an independent ethics commission, but lawmakers have bristled at the mere suggestion that there might be anything to investigate.

But just creating an independent commission to oversee ethics or elections or campaign finance is no guarantee of an improvement in the integrity of the process. The national Center for Public Integrity and Global Integrity report found that in most states, the bodies that oversee ethics don’t have enough money to be effective. For example, Oklahoma has a group that oversees lobbying, campaign finance and the executive and legislative branches. That’s something many advocates have said they want to see here in New Mexico. But the Oklahoma Ethics Commission has only six employees—and its track record isn’t much better than what we’ve seen from the New Mexico Secretary of State’s office.

So there are no silver bullets. Oversight and enforcement take commitment, political will and hard work.

In the end, the message of my report is that New Mexico can do better — and that New Mexicans deserve better than they’re getting.

But there’s reason for hope. The overall report that examines all 50 states demonstrates what other states are doing and gives us options for how to improve oversight and enforcement.

It’s important stuff. I hope you’ll read it because we’re all in this together.

3 thoughts on “No Question, Author says: NM Can Do Better In Enforcement and Oversight”