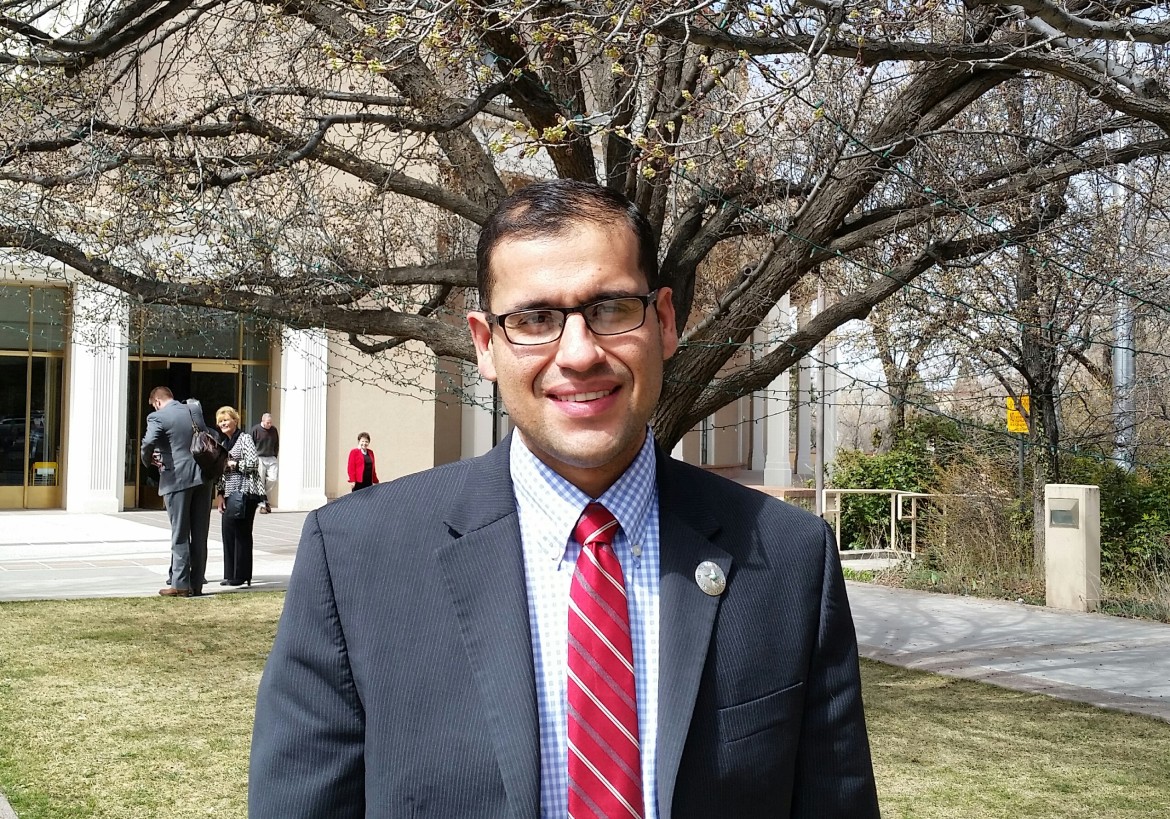 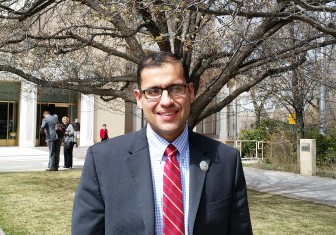 Javier Martínez was familiar with home-visiting services when his son Camilo was born in January.

Martínez’s 2-year-old daughter Marisela participated in a program, which teaches parenting skills and provides other support for pregnant mothers and new parents and guardians. Such programs improve kids’ performance in school and beyond. And, as New Mexico In Depth and the Las Cruces Sun-News reported in December, home visiting is one way to help reduce fatal child abuse.

While preparing to check out of UNM Hospital after Camilo’s birth, Martínez, who is a Democratic state representative from Albuquerque, says he and his wife “tested the system” at the hospital by asking about available services for them and their newborn. They wanted to see if they would be told about home visiting.

They weren’t, Martínez says. So he asked the discharge nurse specifically about home visiting, and says she didn’t know much about it. Martínez says he left the hospital disappointed that it was so difficult to learn about the program.

For four of the past five years, New Mexico has been among the eight states with the highest number of per-capita child abuse and neglect deaths, according to the U.S. Children’s Bureau.

While there are no simple solutions for addressing the complex factors that lead to child abuse, every expert interviewed by NMID and the Sun-News for the December article supported expanding home-visiting programs to better educate parents and help prevent child abuse and neglect.

The state has significantly increased funding for home visiting since fiscal year 2011. Still, current spending falls short of the estimated need, and the budget proposal making its way through the current legislative session wouldn’t change that.

Martínez wants to see a grander effort to make home visiting available for most new parents in the state and to more actively promote its use.

“We really do need a big-picture plan,” Martínez said, “or we’re going to lose another generation of kids.”

Medicaid, the government health-insurance program for the low-income, pays for 82 percent of births in New Mexico, according to a Legislative Finance Committee report. Martínez would like to see home visiting available for parents of all those children, at least. Martínez said his family has “hit some roadblocks, as any other family would, and home visitation has been key.” He said he couldn’t imagine how much more difficult parenting is for parents who face greater challenges than he and his wife.

The state has increased funding for home visiting from $2.1 million in fiscal year 2011 to $12 million in this year. And in the current legislative session, next year’s budget bill, which has yet to receive final approval, would increase funding to $14.3 million.

The Legislative Finance Committee estimates the state needs to spend $41 million a year to make home visiting available for all eligible families. The nonprofit advocacy group New Mexico Voices for Children estimates that it would take $85 million.

“The increases in funding for home visiting are certainly a step in the right direction, but we’re still nowhere near to meeting the need,” Garcia said. “Fully funding these programs makes sense because they help prevent child abuse and cost just a fraction of what it costs to investigate child abuse, prosecute and punish abusers, and try to make the young victims whole again. Home visiting services have many other benefits for children, families, and the state as a whole.”

Home visiting works like this: Parents might learn of the free, voluntary programs through doctors’ offices, hospitals, schools or word of mouth. Once enrolled, a nurse or early childhood education specialist visits the home of a pregnant mom or parent or guardian of a newborn for an hour each week, usually through the child’s third birthday.

Home visitors work from a set curriculum. They urge pregnant women to stop smoking, drinking and doing drugs. They remind parents and guardians to take deep breaths or walk away when they’re frustrated with children. They help families enroll in Medicaid or food stamps. They teach parents and guardians about the dangers of shaking a baby. They explain child development, helping parents and guardians understand, for example, that children who wet their pants or cry inconsolably don’t mean to be aggravating.

During the review of the deaths of 14 children in Southern New Mexico in recent years, NMID and the Sun-News found that kids often did not meet their caregivers’ expectations because the caregivers did not understand their behavior.

Some home-visiting runs are privately funded. That includes the nonprofit Catholic Health Initiatives St. Joseph’s Children, which provides free home-visiting services for 500 families in Sandoval, Valencia and Bernalillo Counties. St. Joseph’s recruited Martínez and his wife for home visiting after their daughter was born.

In addition to those privately funded programs, the state funds programs that operate in most counties in New Mexico.

Henry Varela, spokesman for the state’s Children, Youth and Families Department, said expanding home visiting is not as simple as providing new money. In some communities, offering money to start a home visiting program wouldn’t work because there’s no organization prepared to do it.

Varela said CYFD is doing that by contracting with community development programs to identify and equip potential leaders, working with partner agencies to build community support for home visiting, and offering workforce-training and technical-assistance programs.

Since the 2011 fiscal year, Varela said, CYFD has expanded from funding 16 home visiting programs in 21 counties to 27 programs in 26 counties.

The administration of Gov. Susana Martinez sought no new money for home visiting in this year’s budget, instead asking for millions of dollars for investigating child abuse and neglect claims.

Varela said CYFD is focused on “sustainable and responsible growth” of home-visiting programs by using existing funding to “efficiently target communities who have providers and services available to those in need.”

Martínez the legislator wants more. He supports a proposal to divert 1.5 percent – or tens of millions of dollars a year – from the state’s $14 billion permanent fund to pay for a number of early-childhood initiatives including expanded home visiting.

“There’s a way of funding this without raising taxes, without diverting money from other programs,” Martínez, the Albuquerque state representative, said. “We can do it while ensuring the solvency of the fund and at the same time investing in what works.”

The proposal to allow a statewide, public vote on a proposed constitutional amendment to tap into the permanent fund has stalled in recent legislative sessions. Though her support isn’t necessary to place the initiative on the ballot, Governor Martinez opposes the proposal.

The governor also last year vetoed a $500,000 appropriation through Medicaid that would have leveraged an additional $1.1 million in federal matching funds for home visiting. While she has voiced support for expanded home visiting – and her administration has overseen the recent growth of the program – Martinez has said expansion should be done using existing money in the state budget.

With the permanent-fund proposal shelved for now, Rep. Martínez is working on incremental reforms. He says he will introduce a bill in the next legislative session, which starts in January 2016, to require hospitals to notify new parents about home-visiting services.

But he still hopes the state will embrace the grander plan of expanding home visiting by tapping into the permanent fund.

“As a parent, it is extremely frustrating that we have the answer, we know what we need to do, but that we are investing small dollars and that we are moving at a snail’s pace,” Rep. Martínez said.