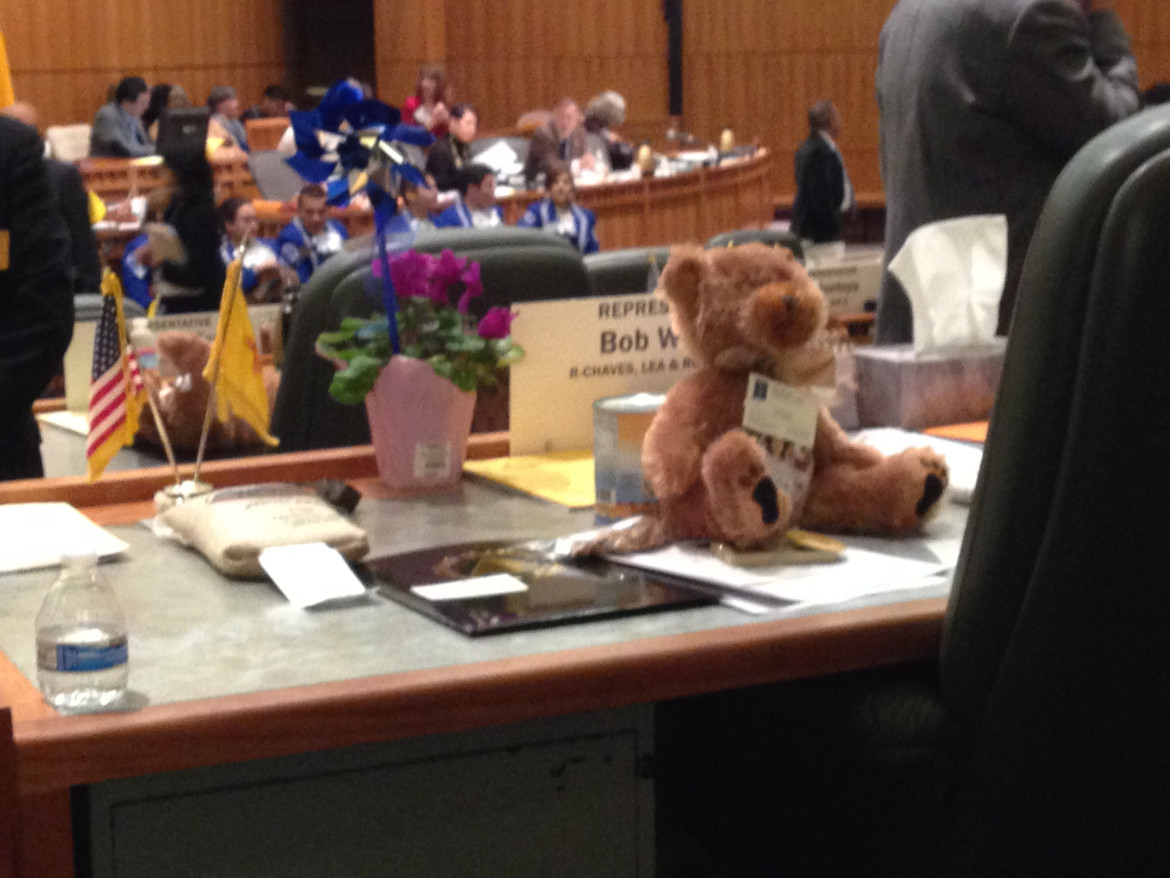 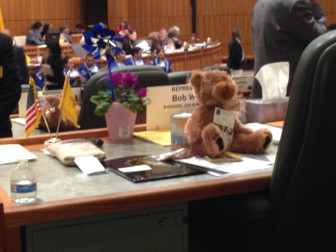 For lawmakers who earn only a daily expense amount and no actual salary, meals during committee hearings and dinners at fancy Santa Fe restaurants can help reduce the cost of traveling to participate in the annual legislative session.

This story is part of a reporting partnership between New Mexico In Depth, KUNM and NMPBS that attempts to pull back the curtain on how the New Mexico Legislature works and, in some cases, doesn’t. Here are data tables for lobbyists expenses and detailed expenses.

For lobbyists, gifts and entertainment offer a chance to get to know lawmakers informally and to promote their clients, from ski resorts to oil companies. Some lobbyists are former lawmakers themselves. Others are former legislative staff or former cabinet secretaries. Still others have been around for years.

But the lack of disclosure required by New Mexico law creates haziness when you try to track how the money flows to state lawmakers and other public officials. Filings for 69 percent of the total spending in the last four years – more than $1.1 million – don’t list specifics on who was wined and dined. That’s because New Mexico doesn’t require lobbyists to disclose specifics about who they entertained if the expense is less than $75.

New Mexico In Depth downloaded and analyzed individual lobbying spending from the New Mexico Secretary of State’s website. Among the findings:

New Mexico In Depth also created a searchable, sortable data table of lobbyists, employers and their total expenses, as well as a table of detailed expenditures.

It’s the end of the first day of the 2015 legislative session. Art Hull is working the busy bar at Rio Chama, a steakhouse a block from the Roundhouse.

Hull slaps a back here, shakes some hands there, pulls up a chair at one table, walks across the room to greet a couple of other folks.

As one of a few hundred lobbyists helping clients get legislation passed or killed, Hull is also one of the biggest spenders when it comes to buying lawmakers meals and drinks.

Hull didn’t want to talk to New Mexico in Depth about his lobbying or his spending. But Hull tops the list of top spenders at $85,910 in the last four years.

Hull represents nearly 20 companies and individuals, including the University of New Mexico, medical interests, energy companies and financial firms, and at least one payday lender.

But you won’t find much detail about Hull’s spending on lawmakers. His filings with the New Mexico Secretary of State list monthly amounts, typically of $1,000 or more, to “inform and discuss concerns with elected officials.”

Kent Cravens, No. 10 on the list with $32,057 in spending in the last four years, is at the other end of the disclosure spectrum. After 11 years in the state Senate, the Albuquerque Republican resigned in 2011 to work as a lobbyist for the New Mexico Oil and Gas Association.

Cravens’ expense reports detail spending ranging from $3.54 to discuss pending legislation with Rep. Jimmie Hall, R-Albuquerque, up to $15,000 to sponsor the 2013 100th Bill Party. While some of his expenses don’t include specific lawmakers, most do.

He said that level of detail came from working with the New Mexico Oil and Gas Association, where the administrative director helped file his reports.

“More information is never a bad thing. You’re never going to get in trouble for too much information you give out,” he said, adding, “It’s a lot of extra work.”

Harrison would like everyone to do the extra work and be more specific about spending on lawmakers.

“What you have right now, some people are great about it,” she said. “Other people will write, ‘legislators, Bull Ring, $4,000, legislation.’”

Cravens sees the lobbyist-lawmaker relationship from both sides.

As a state senator, “I learned to really value the information and input that I got from lobbyists from both sides of any issue,” he said. “I didn’t realize they could be so helpful in terms of decision-making.”

And many lawmakers can use the help when they receive only a $165 per diem each day to cover meals and expenses in Santa Fe and no salary. And dining choices are limited at the Roundhouse.

“When somebody’s willing to supplement that, if we’re working through lunch or dinner at a committee, there will be days on end at the end of the session that you just don’t have time to think about eating,” Cravens said.

As a lobbyist, Cravens said inviting lawmakers to coffee, lunch or dinner offers a chance to get to know each other.

“Relationships are pretty important here,” he said. “The only way you can know people is to spend time with them and not necessarily the two minutes from committee door to committee door.”

But not all lobbyist spending goes toward dining.

Paul Gutierrez, a lobbyist for the New Mexico Association of Counties, spent $150 on a microwave for the House Appropriation and Finance Committee in February 2013. A half dozen lobbyists spent more than $660 on supplies and groceries for lawmakers.

David Roddy, lobbyist for the New Mexico Primary Care Association, has spent more than $3,600 buying teddy bears for lawmakers and their staff members. He and his staff delivered a new set of bears on Thursday.

And each year, George Brooks, executive director of Ski New Mexico, supplies lawmakers with two individual passes for each of the state’s eight downhill and four cross-country ski areas. The $83,500 in ski passes handed out in 2012, 2013 and 2014 put Brooks at No. 2 on the top 10 spending list.

Although he’s registered as a lobbyist, Brooks said he spends little time in Santa Fe unless there’s a tourism initiative to support.

“Our primary purpose is to attract people to ski in New Mexico,” Brooks said. “It’s a good thing for our legislators to know what our product is and to see it first hand.”

Rep. Jeff Steinborn, D-Las Cruces, who is sponsoring one of several bills to reform lobbyist regulation this session, recommended lawmakers be cautious in their dealings with lobbyists and the perception of their constituents.

“I think they’re (lobbyists) in the relationship-building business and, unfortunately, that line between having a good relationship with someone and what is good policy for their citizens back home can get blurry,” Steinborn said. “It’s a dangerous line and it’s something that legislators should be aware of when they’re being courted.”

Not all lawmakers buy in to the lobbyist gravy train.

Rep. Jim Dines, part of the new Republican majority and a freshman lawmaker from Albuquerque, is one of them. He also refused contributions from lobbyists and political action committees during his campaign.

“I felt it important not to accept anything free,” Dines said. “In talking with people in my district, this was a concern of theirs. I pay as I go for dinners, breakfasts and lunches. If I go to a reception, I go there to meet the people and chat, but I don’t partake in any of the food or drink or anything else.”

Dines is one of several lawmakers sponsoring legislation to bring more transparency to lobbying.

His House Bill 241 would require a two-year cooling off period before lawmakers or other public officials and cabinet members may become lobbyists in New Mexico. Republican Gov. Susana Martinez prohibits cabinet officers from lobbying for two years after leaving state government, but Dines’ bill would make it law for the executive and legislative branches.

“Members of the public that I spoke with definitely felt that there was an advantage for those who just walked out the door from being a legislator to being a lobbyist,” Dines said.

Rep. Steinborn is sponsoring a bill to increase reporting requirements by lobbyists and their employers. House Bill 155 would require employers to summarize what they’re paying lobbyists twice a year. UPDATE: Steinborn’s bill is in limbo after a 3-3 party-line vote in a House committee on Feb. 9.

“How much is being spent to lobby the state of New Mexico?” Steinborn asked.

It also would require lobbyists to specify what topics they’re lobbying on, a requirement other states such as Colorado and Wisconsin mandate for those who lobby lawmakers.

Yet New Mexicans widely support reforms, a recent Common Cause poll indicates. In that poll, 64 percent of the 450 voters surveyed said the state’s elected officials are more responsive to lobbyists than the public.

Harrison said that’s why she’ll be lobbying to support reform bills this session.

“Lobbyists are not inherently bad,” Harrison said. “They provide a great resource for our state. It’s just making sure everything is disclosed and everyone knows who’s spending on what.”

3 thoughts on “In NM, lobbyists spend on lawmakers but disclosure lacks”