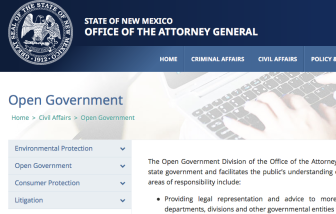 Attorney General Hector Balderas has created an Open Government Division within his office to beef up enforcement of New Mexico’s freedom-of-information laws, and though the process has had a few hiccups, transparency advocates are optimistic that the office will be more aggressive.

The New Mexico Foundation for Open Government has long complained that the office, through several administrations, has never prioritized enforcement of the state’s laws guaranteeing access to public records and meetings. In a 2015 Center for Public Integrity report (conducted by this reporter), New Mexico earned a failing grade for providing public access to information. CPI’s analysis found government agencies did not generally provide records in a timely manner and that members of the public had little recourse to force their release. The AGs office has historically taken many months to process complaints and even then, agencies found to have violated the law were almost exclusively given a warning that future behavior would result in a fine. Fines have almost never been levied.

“Enforcement has been a problem,” the Open Government Division’s new director, Assistant Attorney General Tania Maestas, told this reporter on New Mexico PBS this week. But she stressed that Balderas has made significant changes. “He’s come in saying that he’s going to be tough on these laws and really enforce them and move towards a strong review of public bodies and their transparency,” she said. Weak enforcement has partially been due to the state’s laws, which she said make it hard to impose fines.

Susan Boe of the Foundation for Open Government agreed the structure of the law is problematic, putting some of the burden of enforcement on local district attorneys. “But I would challenge you to find local DAs who do it,” she said in an interview Friday.

Boe said she has urged the AG’s office to take actions short of imposing a fine or jail time. “Why not require the official or employee to take an open government training as a first step?” she said.

Maestas said her office has seen twice as many open government complaints in the past year, but that her attorneys are processing complaints much more quickly, coming up with a draft response within two months. Boe confirmed that she had anecdotal evidence that complaints are being processed more quickly, but added that she hasn’t yet crunched any hard numbers.

Boe said that her group had been impressed by Balderas’s enthusiasm for improving open government work, and although staffing changes have created some delays in getting the new division up and running, she is cautiously optimistic that the promised changes will improve public access.

“We also told Hector we would like to see more actual enforcement such as imposing fines, because we think that will send a message that there’s teeth in the law and we mean business,” Boe said.

Maestas said her office has been taking other steps to educate public officials, including introducing a new good-government training for state lawmakers. “Unfortunately, we didn’t have too great of a turn out,” at the first training, she told NMPBS. Only four people showed up.