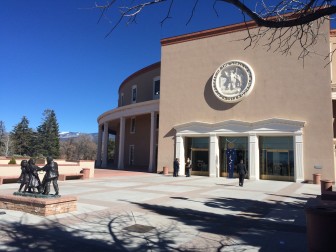 A proposal that would have prevented state lawmakers with government jobs from getting paid while serving in the Legislature was put on hold Monday by the House Government, Elections and Indian Affairs Committee.

Rep. Bill Rehm, R-Bernalillo, said his goal with the bill (HB 39)was to keep the state government from paying people twice.

Many of New Mexico’s part-time civilian legislators have days jobs in local government, and although state lawmakers are unpaid for their service, they do receive mileage reimbursement and a per-diem to cover travel expenses.

Rehm said allowing public employees to take a salary while serving in Santa Fe would violate the state constitution.

Members of the committee took issue with forcing state employees to take time off of work.  Rep. Debbie Rodella, D-Rio Arriba, said she worried that missing work could have negative consequences and that some employees could lose seniority because of their time away from work.

Rep. Antonio “Moe” Maestas, D-Bernalillo, pointed out that the bill would force government employees to take unpaid leave whether or not they chose to accept the per-diem compensation. It would be unfair to force those who decline the per diem to also take unpaid leave, he said.

With ten days left in the legislative session, the committee asked Rep. Rehm to revise the bill and bring it back.