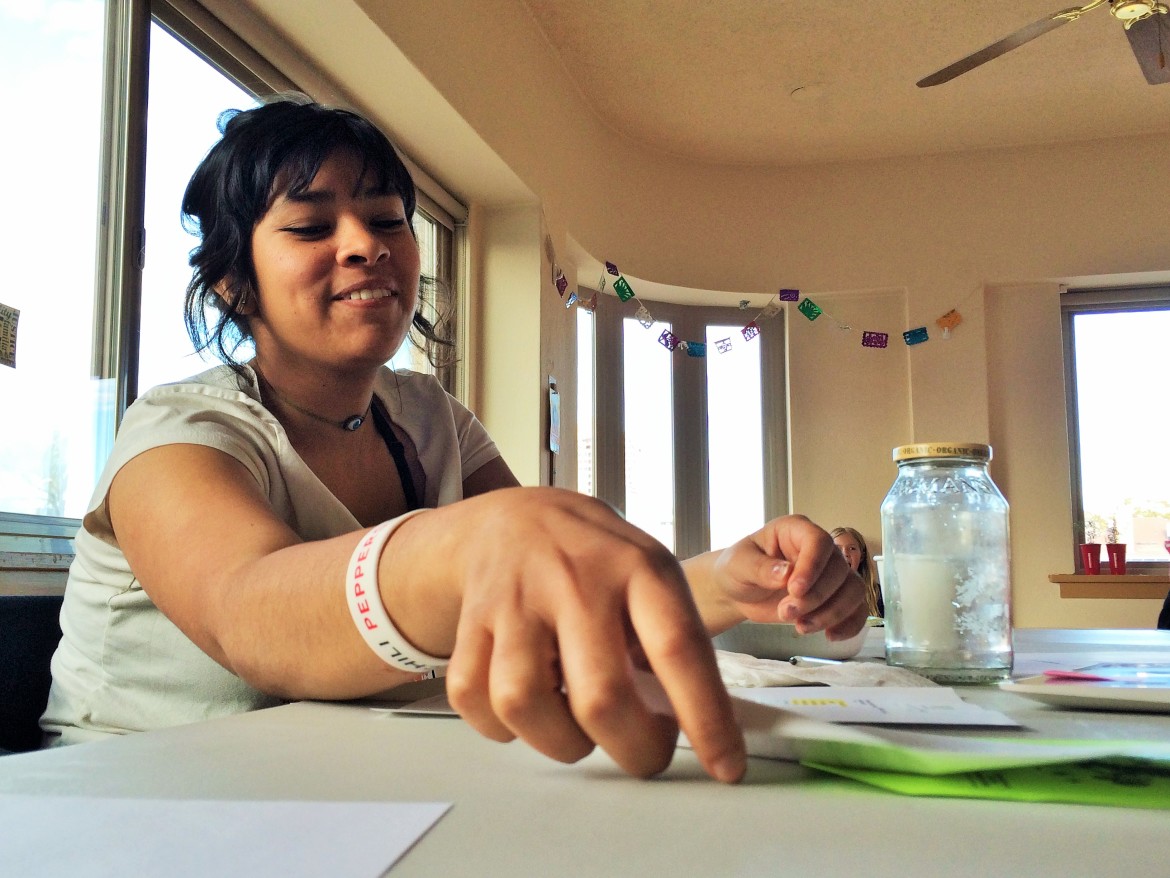 The environmental group, Juntos, has been working on what it calls "The Peoples Clean Power Plan." Luzero Velasquez is one of the teens who has been canvassing some Albuquerque neighborhoods. 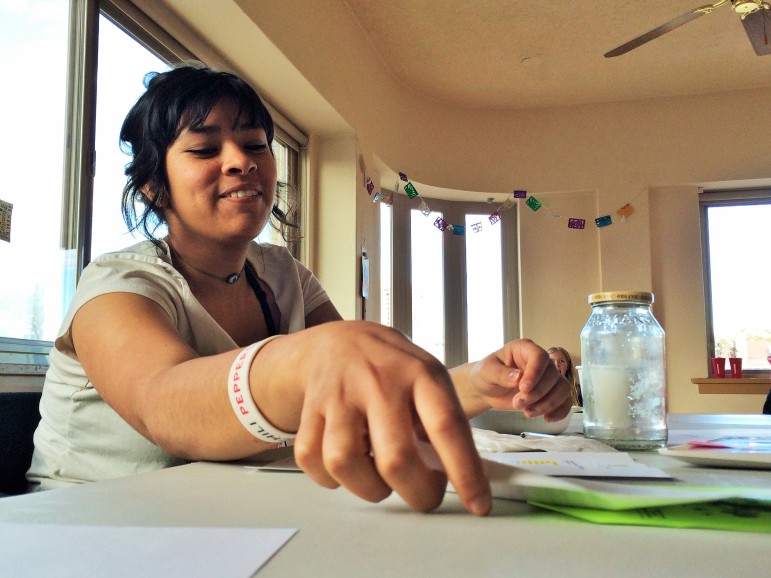 The environmental group, Juntos, has been working on what it calls “The Peoples Clean Power Plan.” Luzero Velasquez is one of the teens who has been canvassing some Albuquerque neighborhoods.

Until earlier this year, states across the nation, including New Mexico, had been holding public meetings and planning to cut pollution from power plants. Taken as a whole, those plans were the Obama Administration’s most significant attempt, through the Clean Power Plan (CPP), to cut U.S. emissions of greenhouse gases.

But in February, the Supreme Court stayed implementation of the CPP, pending the outcome of a lawsuit against the plan before the U.S. Court of Appeals for the District of Columbia Circuit.

With the U.S. Environmental Protection Agency (EPA) unable to adhere to the original timeline for requiring states to complete their carbon-cutting plans or face implementation of a federal plan, Texas, Utah, and 18 others suspended work. Others like Colorado, California, Oregon, and many northeastern states continued planning.

Then, there’s New Mexico. Despite early pledges of transparency from Gov. Susana Martinez, officials within her administration—including New Mexico Environment Department Secretary Ryan Flynn—won’t directly address climate change or say whether they’re continuing to work on a state plan that complies with the CPP.

From first mention of the Clean Power Plan in 2014, New Mexico was already well-poised to achieve emissions cuts: The year before, the EPA, the state, and Public Service Company of New Mexico (PNM) had hammered out an agreement to close two units of the San Juan Power Plant, a coal-fired plant near Farmington, by 2017.

Now, after the federal stay of the CPP, NMED’s communications director Allison Majure would only say New Mexico remained “committed to taking meaningful action to reduce greenhouse gases by a projected 5.7 million tons by the end of 2017.”

Presumably, she was referring to the San Juan Power Plant, though Majure would not clarify her emailed statement despite several follow-up requests for information by New Mexico in Depth.

Although the City of Albuquerque was involved with the initial public meetings, Danny Nevarez, Environmental Health Deputy Director for the city’s Air Quality Program directed all questions to NMED. He did confirm the city is not planning for further public meetings.

Looking outside the state for answers on New Mexico’s CPP process didn’t bear fruit, either. EPA officials deferred questions, saying they weren’t in a position to answer for the state or provide any information about NMED’s activities.

But not all public officials went silent when the U.S. Supreme Court stayed implementation of the CPP.  Attorney General Hector Balderas joined a coalition of state AG’s supporting the Clean Power Plan when it was first unveiled last summer. Now, he continues to support it.

“We will continue to pursue the most affordable, cleanest energy available while protecting New Mexicans, our economy and our environment,” Balderas told New Mexico in Depth. “The Clean Power Plan will lead to significantly reduced emissions of climate changing air pollution.” 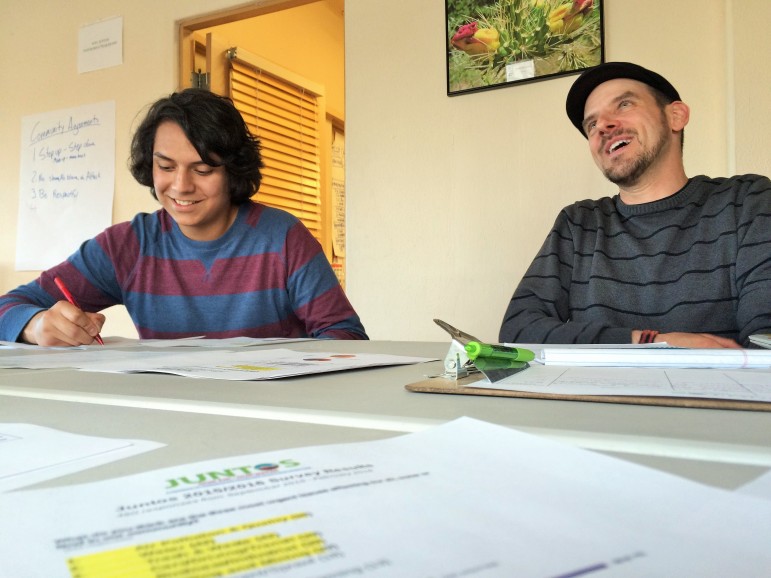 The silence from NMED frustrates young activists working on what they call the Peoples Clean Power Plan, a process meant to run parallel to the state’s.

Luzero Velasquez, 17, has been canvassing neighborhoods like Albuquerque’s South Valley, Westgate, and the International District. She’s with Juntos, a program of the CVNM Education Fund, sister organization to the environmental group Conservation Voters New Mexico, and has surveyed about 500 people in those communities, asking them to weigh in on air, water, and land issues.

So far, nearly three-quarters of the Latino/a families responding to the survey say they don’t want their electricity to contribute to air pollution or climate change, Juntos Director Christopher Ramirez says, with more than 60 percent being “strongly concerned” about air quality in Albuquerque.

When asking people if they’ve heard of the Clean Power Plan, the teens get a lot of blank looks. Occasionally, says 18-year old Robin Carreón, someone will say they’ve heard President Obama mention it in a speech.

“No one knows what’s going on in New Mexico when we talk to people,” says Carreón. “It feels like it’s the first time anyone has talked to them about it.”

For teens like Carreón and Velasquez—who grew up in Albuquerque, but don’t know if they’d someday want to raise their own children here—feeling left out of the process is discouraging.