A political action committee fueled by cash from those connected with a proposed 13,700-acre development project on Albuquerque’s west side, called Santolina, is getting most of the attention in the Bernalillo County Commission primary.

But the District 2 candidate opposed by the developer’s PAC is leading his two opponents in personal fundraising.

Adrian Pedroza, who opposes the Santolina housing development, has raised nearly $74,000 in the contest. That compares with more than $52,000 raised by Albuquerque Public School Board member and Breaking Bad cast member Steven Michael Quezada, and $26,000 raised by Robert Chavez.

Here’s a look at money raised and spent in the campaign thus far:
Direct link: datawrapper.dwcdn.net/rTPmE/2/

The winner of Tuesday’s Democratic primary will face Republican Patricia Paiz in the November general election. The winner of that contest will replace Commissioner Art De La Cruz, who is term-limited.

De La Cruz provided a crucial third vote to approve the Santolina master plan last year. Future decisions by the commission will include approval of more detailed plans related to transportation, zoning and whether to sign off on creation of tax increment development districts, which would allow developers to capture a portion of future tax revenue to recoup their development costs.

Pedroza is a staunch opponent of the development.

An incumbent county commissioner who opposes Santolina and supports Pedroza filed a complaint this week against New Mexicans for New Mexico. Commissioner Debbie O’Malley wants the county to investigate whether the PAC is violating rules prohibiting those doing business with the county from donating more than $1,000 to a candidate.

As NMID reported last month, the PAC got $5,000 from Jeffrey Garrett, the Phoenix developer working on the project. Other Albuquerque businessmen affiliated with Santolina also contributed to the PAC.

Chavez received $1,000 from Garrett in April. 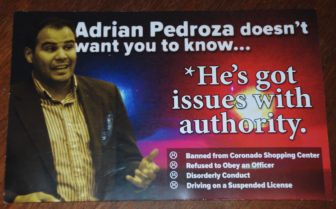 In its most recent report, the PAC didn’t report any additional contributions. But it reported spending on robocalls, mailers and online ads.

The candidates are taking somewhat different tacks in spending.

Pedroza has paid Holguin Consulting nearly $46,300 for consulting, mailers and other reimbursements.

Quezada has paid Bosque Strategies more than $10,800, while spending more than $9,000 on four mailers to potential voters.