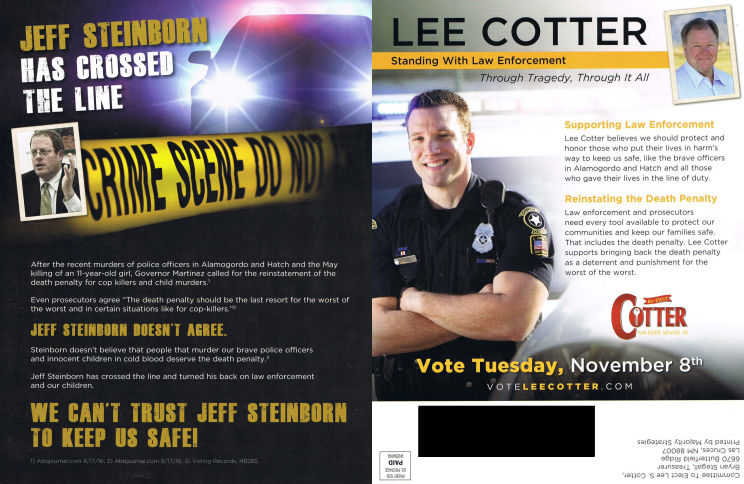 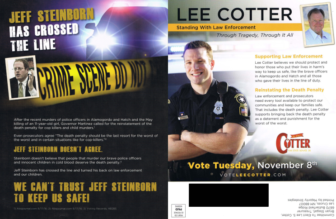 The death penalty is already an issue in a Las Cruces Senate district, even before the special session that begins Friday.

Although that session is primarily aimed at the state’s budget deficit, Republican Gov. Susana Martinez is also asking lawmakers to reinstate the death penalty in convictions involving slain police, corrections officers or children.

Some suspect Martinez wants to put Democratic House and Senate members on the record opposing the death penalty to use against them in campaign advertising.

But Sen. Lee Cotter, a Las Cruces Republican, sent a mailer this week attacking his opponent, Rep. Jeff Steinborn, a Las Cruces Democrat on the issue.

“Jeff Steinborn has crossed the line,” the mailer reads. “Steinborn doesn’t believe that people that murder our brave police officers and innocent children in cold blood deserve the death penalty.”

Steinborn was endorsed by Las Cruces Police Officers Association in the primary election, but the association hasn’t endorsed in the general election. Steinborn did vote to abolish the death penalty, but he said that doesn’t mean he doesn’t support law enforcement officers.

“It’s disgusting,” he told NMID in an interview. “I think there’s nothing more offensive than trying to say that you don’t stand with a murdered policeman. It’s the kind of mud we expected to be slung in this election.”

Republicans are trying to hold on to their majority in the House, which they won in 2014 for the first time in 60 years, and gain a majority in the Senate in the November elections.

The Senate District 36 face-off between Cotter and Steinborn is considered one of the more competitive races in the 112 legislative contests.

Getting campaign mailers, robocalls, etc.? Submit them to New Mexico In Depth’s Follow the Message project so we can share them.