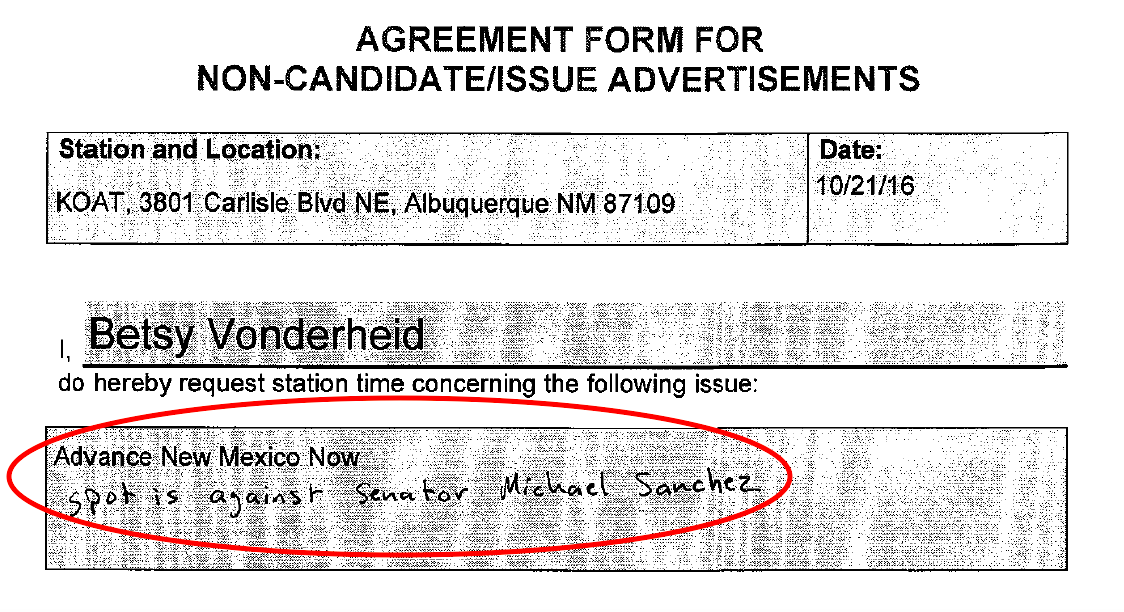 The ads begin Sunday on at least two Albuquerque stations, KOB and KOAT, and air through early November, based on contracts filed with the Federal Communications Commission on Friday.

UPDATED: KRQE filed a contract Monday afternoon with Advance for 58 ads at a cost of $107,650.

Meanwhile, Sanchez is airing more than $120,000 in ads on four Albuquerque stations through Election Day. His ads began Wednesday, Oct. 17.

It’s likely Advance will air ads on other stations as well. As of Friday, the super PAC is slated to run 142 ads on two stations compared with 429 on four stations for Sanchez.

TV stations must give candidates lower rates for political advertising than non-candidate groups.

The Advance ad, posted to YouTube late Sunday, is a 1-minute spot criticizing Sanchez for being soft on crime.

Sanchez, meanwhile, has been running 1-minute spots focused on his background and legislative achievements.

McCleskey Media Strategies, operated by Jay McCleskey, performs much of the group’s consulting work. Melissa Sousa, the 2014 campaign manager for Martinez, is the CEO of Advance. And former Martinez finance director Jessica Perez is the PAC’s treasurer.

Super PACs may take unlimited money to make independent expenditures in races. But they aren’t supposed to coordinate with candidates or political parties.

New Mexico law doesn’t require specific disclosure of independent spending, such as how much a group spends on mailers, TV ads or such for or against a particular candidate or in a particular contest.

But that PACs efforts to defeat Sanchez failed.

This year, Sanchez is a major target for Martinez and the GOP. He faces Republican Greg Baca in Senate District 29. Both men are attorneys from Belen.