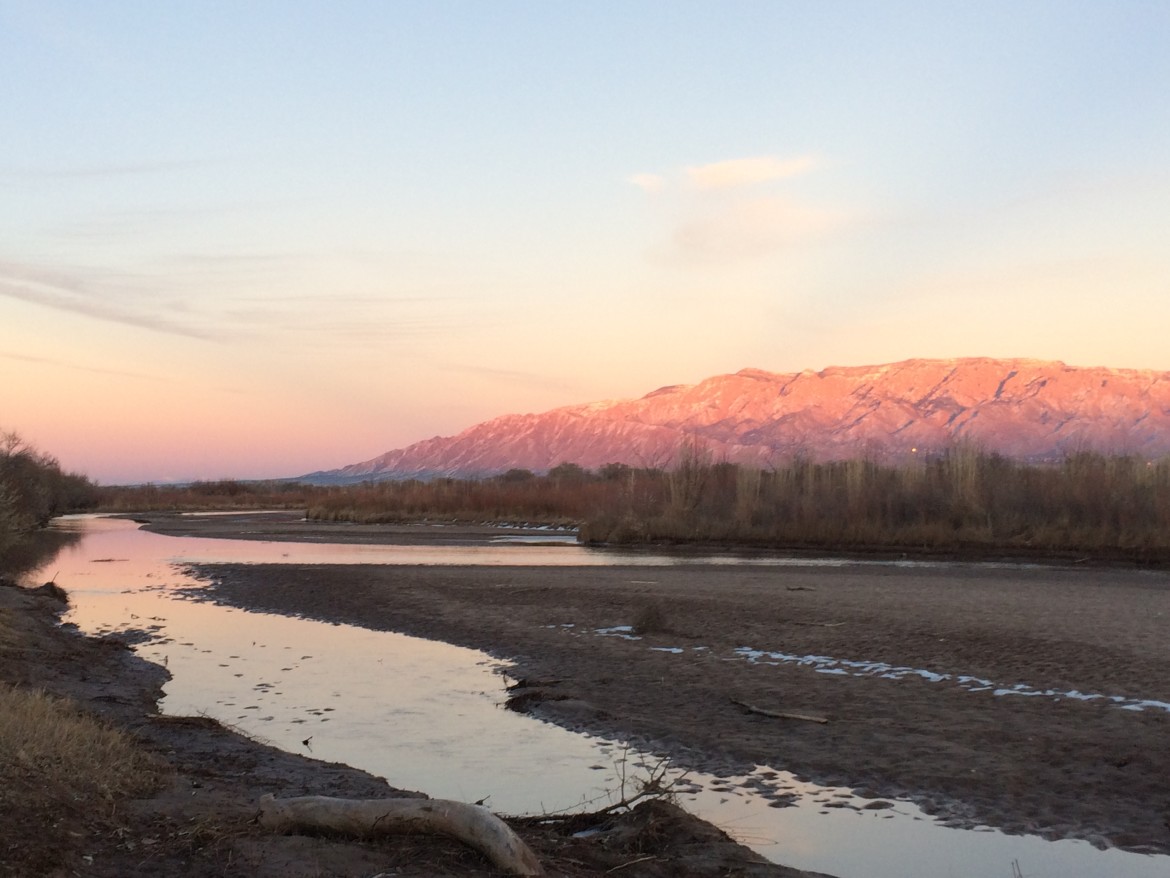 The Rio Grande, pictured here as it flows through Albuquerque. provides water to farms, cities, and businesses in Colorado, New Mexico, Texas, and Mexico. 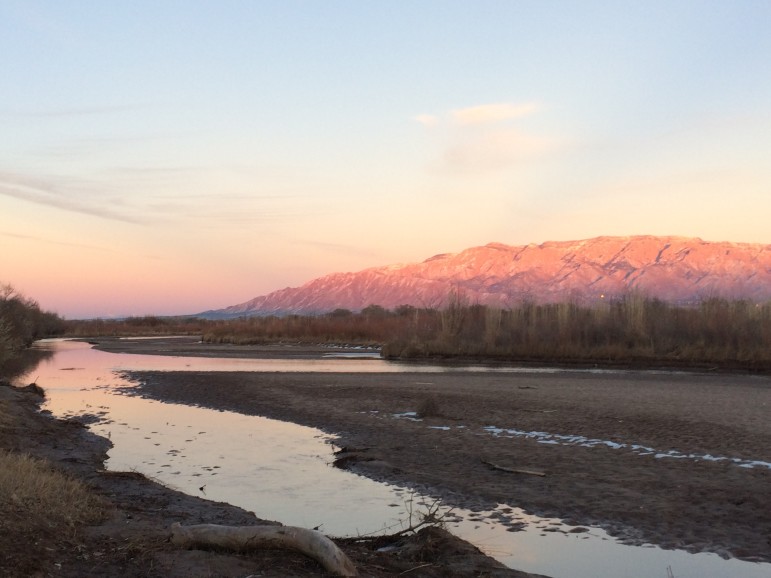 The Rio Grande, pictured here as it flows through Albuquerque, provides water to farms, cities, and businesses in Colorado, New Mexico, Texas, and Mexico.

In the mad rush to get a jump on holiday vacation, readers probably missed the release of an important paper on water and climate change in the West. But don’t worry. Grab a cookie or some fruitcake, and I’ll lay out the water wonkery for you.

In the paper, “Western water and climate change,” authors studied four major river basins—the Colorado River, the Rio Grande, the Klamath River and California’s Bay-Delta system—and looked at how each will be affected by climate change.

Of the four, they found that the Rio Grande Basin (which includes the river itself and its tributaries) faces the greatest challenges.

In fact, they cite the Rio Grande as the best example of how continued declines in water flow due to climate change might sink a major river system into “permanent drought.”

That’s in part because all of the river’s waters are already appropriated—or, in use by someone. That means there’s little wriggle-room in the system to deal with shrinking supplies or new demands. And as the climate warms and less surface water is available, those waters—“currently being disputed and wrangled”—will be less and less available in the coming decades.

Among the key points they make about the West in general:

-Most of the region has warmed by about 1.5 degrees Celsius compared to the historical norms from 1901-1960

-The frost-free season has lengthened by 15 to 20 percent, a trend that’s expected to continue, with a 60 to 70 percent increase in many mountain areas

-Dry spells will lengthen in most regions

(By the way, issues related to snowpack and runoff should be increasingly familiar to NMID readers. We wrote last year about how difficult it is to make accurate streamflow forecasts and about how decreasing snowfall and rainfall will put many water supplies, including those in New Mexico, at risk.)

The authors explain that changes in snowfall and its runoff into streams and rivers will affect people—even in places where the annual volume of flows might not change.

That’s because of how we use and allocate water.

In New Mexico, water rights are mind-bogglingly complicated. But the simplified version goes something like this: Water in streams and rivers belongs to the public and it’s held in trust by the state. The state grants water rights (which are basically private property rights) to farmers, cities or businesses who prove they can put the water to “beneficial use.” The system was set up in the early 20th century, even before statehood.

Many farmers hold older, more senior water rights, while cities often possess junior rights. The pueblos in the Middle Rio Grande have the oldest and most senior water rights—and the amount of water they actually “own” has never been quantified.

In fact, the entire Middle Rio Grande remains unadjudicated: the state has never officially determined the extent and ownership of water rights in the river.

Currently, the state says it lacks the funding to complete adjudication in the Middle Rio Grande or to incorporate climate projections into the ongoing rewrite of the state’s Water Plan.

Writing in general about the western basins they studied, Dettinger, Udall and Georgakakos write:

Higher flows in the early spring will favor what have been junior and infrequently used storage rights, and senior rights may find less flow on the descending limb of the hydrograph through the summer and fall. In fact, some of the diversions thought in the 20th century to have reliable senior water rights may be without water during the hottest and driest periods of summer.

They also point out that “environmental water” will be in short supply during the driest periods of the summer. 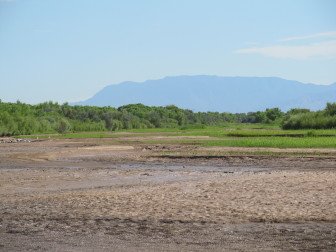 As in Los Lunas during the summer of 2012, the Middle Rio Grande often dries during irrigation season.

In some western states, including Oregon and Colorado, rivers have “instream water rights.” A certain amount of water must legally flow through them—not for delivery to downstream users, but to support the river itself and its fish, wildlife and riparian vegetation.

That’s not the case in New Mexico, where rivers lack rights to their own waters.

When possible, water managers will try to keep stretches of the Middle Rio Grande wet for rare species, such as the Silvery Minnow, that are protected under the federal Endangered Species Act. But nearly every year since 1996, stretches have typically dried sometime between June and late October, when farmers are diverting water from the river for irrigation season. 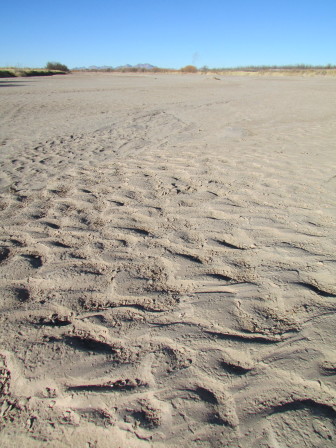 In southern New Mexico, the Rio Grande is dry most of the year, as seen near Las Cruces in January, 2014.

And in southern New Mexico, the Rio Grande stands dry for up to nine months of the year.

The paper isn’t all gloom and doom, however. The authors do have some good news. Sort of.

The challenges and decisions western water managers are facing are not necessarily new.

They write: “The West has already grappled with most of the problems that will face it in the future, however inadequately in some cases and however transformed some will be by larger trends in the future.”

So, what needs to happen?

The task now confronting westerners, they write, is to address those problems that have been acknowledged but not resolved — and to “prepare for the changes that will surely come.”

8 thoughts on “Is the Rio Grande Headed for “Permanent Drought”?”