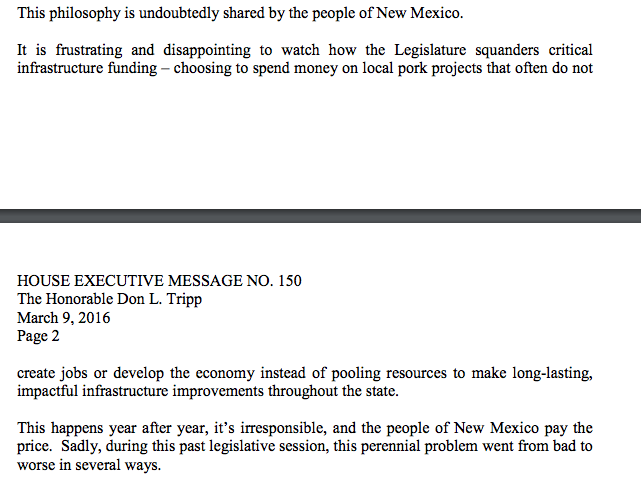 An excerpt from the governor's message on the capital outlay bill 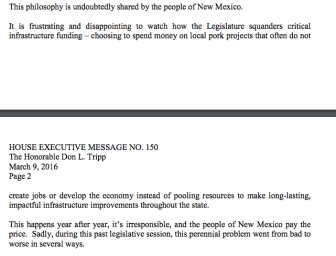 Gov. Susana Martinez cracked down on pork-barrel infrastructure funding Wednesday, vetoing $19.7 million in funding for projects around the state.

She issued a blistering letter to explain her actions to state lawmakers.

“It is frustrating and disappointing to watch how the Legislature squanders critical infrastructure funding – choosing to spend money on local pork projects that often do not create jobs or develop the economy…” Martinez wrote on the first page of an 18-page veto message.

For the next several pages Martinez lobbed one criticism after another at the New Mexico Legislature, including saying lawmakers “nearly immediately killed legislation that would have professionalized and reformed the capital outlay process.”

“During this session, legislators grossly increased their pork barrel spending, chose to spend the money in a number of irresponsible ways, concealed their individual appropriation decisions from the public, slipped unapproved and un-vetted projects into the capital bills, rejected reform of any sort to the capital outlay process, and ignored a problem that is going to lead to even less money being available for infrastructure projects in the future.”

State officials rejected the original proposal for the health building because the plans were incomplete and the purpose wasn’t clear. The more recent proposal put forth by Harper on behalf of UNM hadn’t been through the process.

Martinez also vetoed all projects in the capital outlay bill (House Bill 219) that were less than $10,000 each.

During the past year, New Mexico In Depth has examined infrastructure funding in the Capital Dilemma series. Over the past year the series has outlined many of the practices the governor criticized in her veto message Wednesday.

New Mexico is the only state in the nation that allows lawmakers to divvy up money among themselves for projects aimed at their constituents. And although each senator and each representative receives an equal amount of money, spending doesn’t appear equitable when examined on a per person basis for the state’s 33 counties.

Many projects included in the bills aren’t fully funded or ready for construction. As a result, more than $1 billion in capital outlay projects remains unspent, according to legislative staff.

And it’s unclear how lawmakers spend their allocations. Although initial wish lists of projects are available for each lawmaker, legislative staff said the final allocations aren’t public records.

Think New Mexico called for reforming the system by creating a commission to vet and recommend projects to lawmakers and the governor. But that bill also died quickly in a House committee.

“The concerns that the Governor raises with this year’s severance tax capital outlay bill are the same problems that we saw in looking at these bills over the past four decades,” wrote Think New Mexico Executive Director Fred Nathan in an email. “Once again, this bill represents a lost opportunity to invest in infrastructure improvements that will create well-paying private sector jobs for New Mexicans, as many of these dollars will sit on the sidelines unspent for years.”