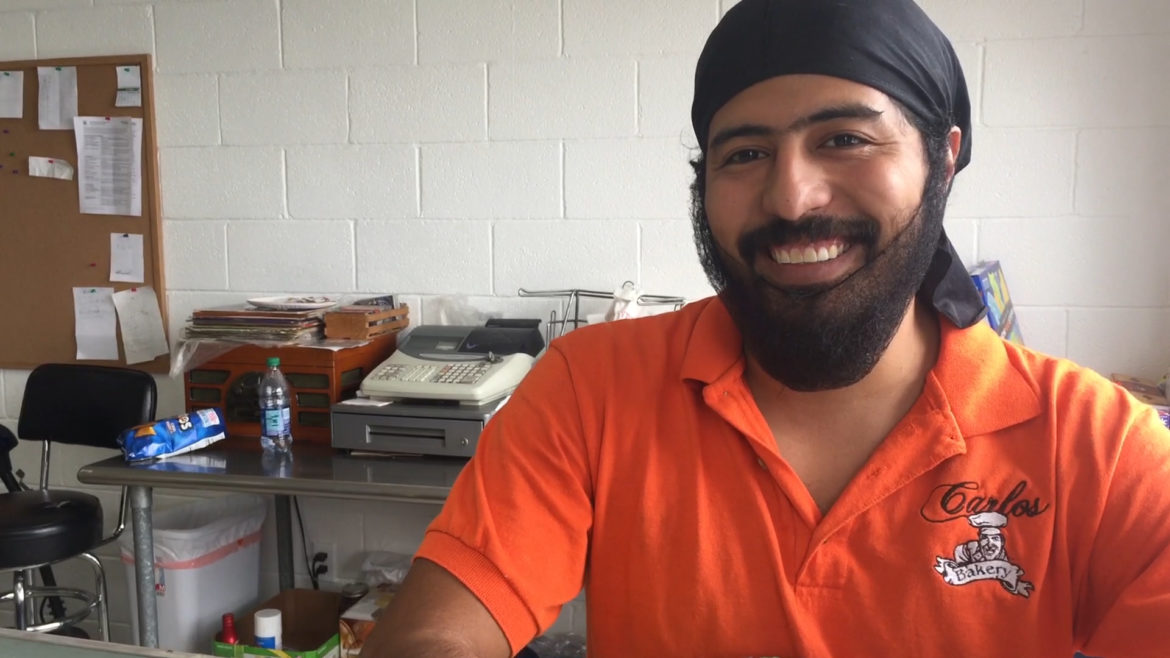 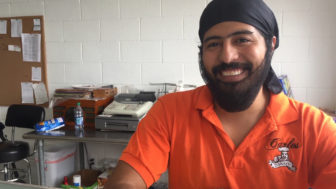 SUNLAND PARK – A couple of miles from Texas and less than a mile from Mexico, Carlos Juarez is serving the lunch crowd at the family business, Carlos Bakery/Panaderia.

Signs for local candidates adorn the main business sign and the windows.

The 28-year-old sees a definite difference in the 2016 presidential election compared with four years ago.

“There’s no enthusiasm anymore,” Juarez said. “2012, from the Obama campaign, we had people coming out once or twice a week. They had people going door to door. This year, I haven’t really seen anybody.”

Hispanic voters, especially millennials like Juarez, are seen as a potential electoral force nationally as well as in New Mexico and Texas this year.

But those who watch the Latino vote closely agree with Juarez about the declining voter outreach compared with the last two presidential elections.

They note that Latinos tend to vote at significantly lower rates than non-Hispanic whites in presidential elections.

And they question if that will change in 2016, despite the fact that Republican presidential candidate Donald Trump maligns Mexican immigrants while Democrat Hillary Clinton woos Spanish-language voters.

Three-quarters of Latino voters have discussed Trump’s comments about them in the past year, according to a Pew Research poll released Tuesday.

“The Latino vote has grown in importance in recent years, because it’s bigger and because it’s grown in different parts of the country,” said Mark Hugo Lopez, director of Hispanic research for Pew Research Center. “While a record number vote every election, the share of that turnout has actually been declining and is below 50 percent.”

In New Mexico, for instance, Hispanics make up 44 percent of the voting-age population, according to the U.S. Census. That’s about the same as non-Hispanic whites. But in 2012, only 51 percent of eligible Latinos voted, compared with 71 of eligible whites.

A 71 percent turnout of eligible Latinos would have meant an extra 150,000 votes in New Mexico.

In Texas, Hispanics account for nearly 35 percent of the voting-age population, with non-Hispanic whites at 48 percent. But only 39 percent of eligible Latinos voted, compared with 61 percent of whites.

A 61 percent turnout of eligible Latinos in Texas would have meant another 1 million votes.

Gabriel Sanchez is a political science professor at University of New Mexico and a principle in Latino Decisions, a political public opinion firm.

Still Sanchez questions whether Latinos will turn out at higher rates than in the past. About 70 percent of Hispanics surveyed by Pew said they’re “absolutely certain” they’ll vote, compared with 77 percent in 2012.

In Las Cruces and El Paso, however, Michael Stratton is trying to remedy that. Stratton is a long-time political operative in the Colorado and the Mountain West, and this year, he’s working for Clinton’s campaign.

“Some people may not  believe this or think it’s even possible, but (Clinton) is within 4 to 6 points of Trump within Texas and the undecideds seem to be in the right position,” Stratton said. “Maybe this is the time that Texas comes back.”

But for that to happen, the Latino vote would have to turn out in larger numbers. New Mexico is highly Hispanic, while El Paso County is nearly 80 percent Latino and neighboring Hudspeth is 75 percent Latino.

Pew’s Lopez said some might be presuming that opposition to Trump is enough to increase Latino turnout.

“One part of it might be a perception that the anti-Trump movement is so great that that will do the heavy lifting for us,” Lopez said. “There is a heavy anti-Trump effect but, that doesn’t override the need for basic mobilization.”

“Many of these young millennials live in states that are not important in this election cycle,” Lopez said. “They may not get outreach unless they’re in a battleground state.”

Sanchez of Latino Decisions said he’s seen some recent attempts by the Trump campaign to figure out how to reach Hispanics. And the national GOP also has made such efforts.

“After the 2012 election cycle, they realized they need to do that,” Sanchez said of national Republicans. “Their strategy has largely been to identify Latino candidates. They’ve been very effective at that. But I don’t think they’ve changed their policy stances or their overall outlook.”

But in New Mexico, the Trump campaign isn’t specifically trying to attract Latinos.

“We’re going after all voters,” said Todd Johnson, the state GOP director for the Trump campaign. “We’re not going the Clinton route of targeting just one demographic.”

“You can’t look at Latinos as a monolithic voting block,” said Maria Handley, executive director of Generation Latino, a Colorado-based effort to get younger Hispanics to vote.

For instance, in Florida, Sanchez said, “the common perception is that we’re talking about Cuban voters. You’ve got more Mexican voters in Florida than you do of any of the other subgroups.”

But those various Latino voters have much in common with each other – and with voters of other ethnicities – when it comes to issues of concern.

“Millennial Latinos are very much the same as Latinos across the board,” Handley said. “They’re concerned about jobs, the economy, health care. They really want to get ahead just like everyone else.”

Sunland Park’s Juarez dreams of turning his amateur beer brewing hobby into an extension of the family business some day.

Juarez definitely plans to vote. And he’s convinced his 21-year old niece to register for the first time.

But he’s unimpressed with Trump and Clinton.

“I’m not too happy with either candidate,” he said.

Two signs for Libertarian candidate Johnson adorn the front windows of the bakery, offering one of the options Juarez – like other millennials – is considering.