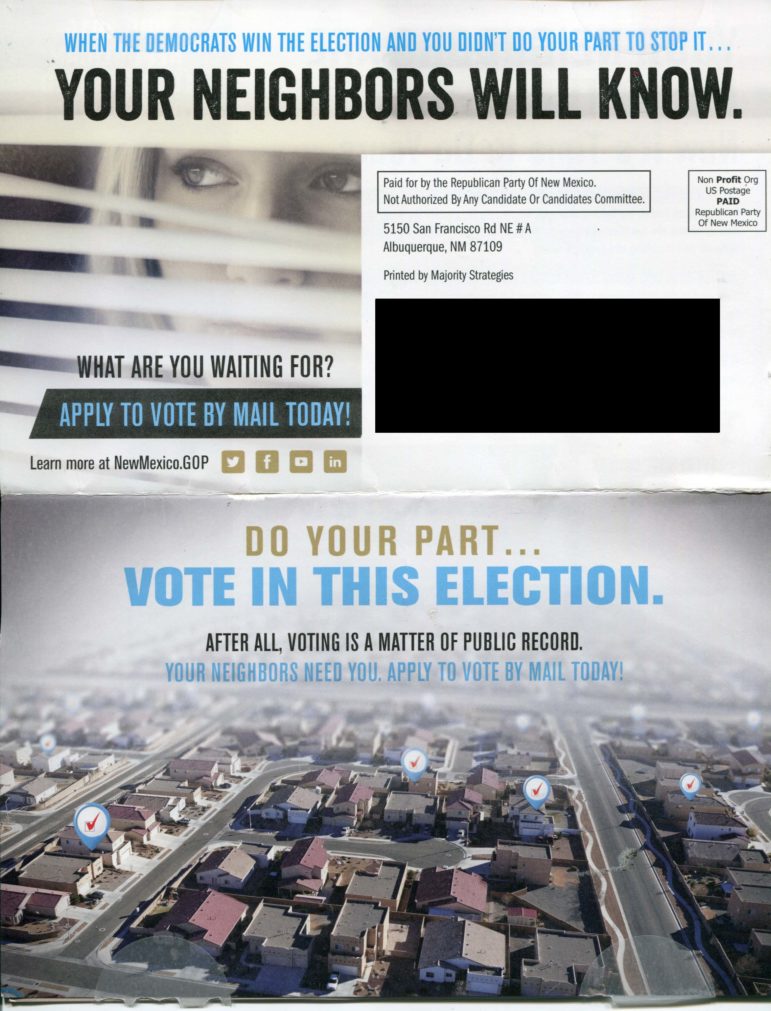 “When Democrats win the election and you didn’t do your part to stop it… Your neighbors will know.”

That’s the message on a mailer from the New Mexico Republican Party encouraging early voting.

But not everyone is thrilled by it.

“I feel like this is a threat,” said Dusty Deen, a 35-year-old Roswell resident who received the mailer this week.

The flier features a woman peeking out her blinds “as though she voted for Hillary and they’re forming a mob,” said Deen, who is an unaffiliated voter..

The New Mexico Republican Party office and spokesman Tucker Keene did not respond to phone calls and emails from NMID. Keene confirmed to the Daily Beast that the party sent the mailer.

But Deen said he called the state party.

“I called the New Mexico GOP office,” he said. “I inquired as to their implications of the flier, which they told me was to get me to vote. The implication was unclear. This seemed like a threat that my neighbors might retaliate against me.”

University of New Mexico political scientist Lonna Atkeson said the mailers are a sign that 2016 isn’t going well for the New Mexico GOP.

“There are several articles in Political Science that show that shame can motivate voters. So they are applying known mobilizing tactics,” Atkeson wrote in an email. “However, for a party to be trying to mobilize their own base with this frame/message shows the desperation or at least fear that GOP voters may decide to stay home this election.”

The multi-part mailer features an application for an absentee ballot, a listing of GOP candidates from state legislature up to presidential candidate Donald Trump. It mentions fighting crime, less regulation for business and dedication to families.

“After all,” the flier reads, “voting is a matter of public record. Your neighbors need you to apply to vote by mail today!”

It’s true that whether or not someone has voted is public record, though how someone voted is always secret.

The concept of insinuating that your neighbors will find out if you don’t vote isn’t new. In a story about mailers sent by Sen. Ted Cruz during his presidential campaign in Iowa, the New Yorker cited a 2006 study that suggested voter turnout improves when mailers suggest their turnout will be public.

The Cruz mailers were more alarmist with the words “VOTING VIOLATION” and a list of neighbors and their voting “grades.” The Iowa secretary of state criticized the mailers because they were designed to look like official communication from the government.

The New Mexico mailer is clearly sent by the Republican Party and doesn’t resemble a government publication.

Deen planned to vote before he received the mailer and still will.

But he isn’t impressed by the GOP tactics. And neither were the friends who commented on his Facebook post of the mailer.

“As many hardcore Republican friends had the same reaction as hardcore Democratic friends,” he said. “If I got the same thing from the Democratic side, I’d feel the same way.”