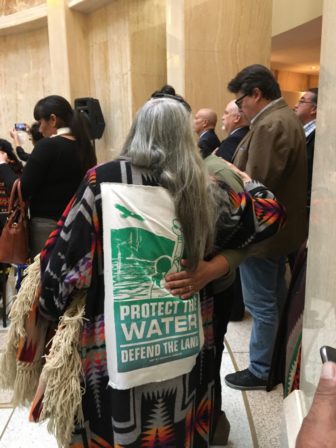 Each year, American Indian Day brings culture and concerns from Native Americans across New Mexico to the State Legislature, but Friday they also showed up to show unified support for the efforts of the Standing Rock Sioux tribe in South Dakota to stop a pipeline that they say threatens their water and damages sacred sites.

“We came here today because it’s American Indian Day and to support Standing Rock,” said Rita Blatche who drove more than three hours with her husband from Mescalero to Santa Fe.

Standing Rock was the overall theme of the day, with Standing Rock Councilman Robert Taken Alive speaking as the honored guest. All 23 Native American tribes within the state unified their stance toward the Dakota Access Pipeline and signed a letter opposing the pipeline.

Sen. Benny Shendo, Jr., D-Jemez Pueblo, and Sen. John Pinto, D-Gallup, showed their support by introducing two memorials. One declared Friday as “Water is Life Day”. And the “All NM Tribes Standing Strong with Standing Rock” declared that all 23 Native American tribes stand with the Standing Rock Sioux tribe in its opposition to the pipeline, and called on President Trump to undertake meaningful government to government consultations with tribes about infrastructure and other issues meaningful to tribes.

Here are a few photographs and video from social media during the day: