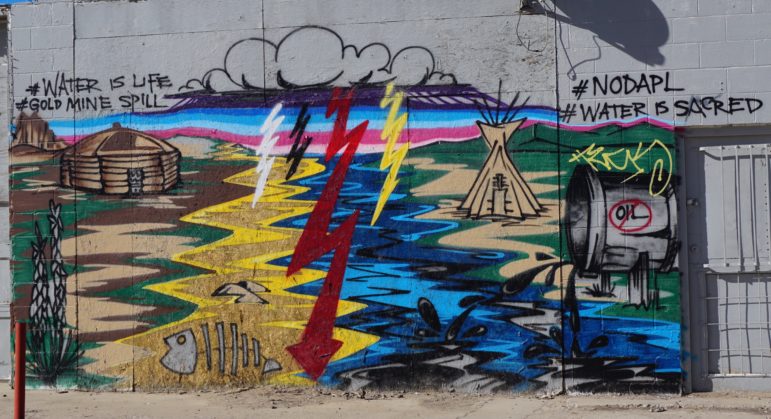 Water was the focus at the Roundhouse during American Indian Day, bringing together activists and lawmakers, on Friday. The day’s theme–”No to the Dakota Access Pipeline”–signified a greater interest in water rights, communal support, and a growing enthusiasm for environmental issues among Indigenous New Mexicans.

Attendees declared their support for the Standing Rock Sioux tribe’s opposition to a proposed oil pipeline route in North Dakota, and affirmed the importance of clean water for Indigenous people everywhere.

“Standing Rock galvanized people from all over, not just Indians, but native, non-native and people from around the world that came together around an issue of water. I think we’re going to see more of that,” Sen. Benny Shendo, D-Jemez Pueblo, said.

People may deny it, Sen. Shendo continued, but climate change is real.

“Water is sacred,” he said, “Water is life. …this is no longer the 1800’s, I think people now, as Indian people, we’re going to see a lot more Indian people making a stand.”

Some of those present at Friday’s event had firsthand experience of the pipeline protest in North Dakota. Shendo’s son, Ben, in November joined the large indigenous encampment near the pipeline site.

He found beauty in the close relationships that were built and the number of Indigenous people who showed up, the younger Shendo said, the experience serving as “practice for when you go back home.”

The Standing Rock protest against the pipeline, which would snake underneath the Missouri river about a half-mile upstream of the tribal reservation, has garnered support from hundreds of Indigenous tribes from around the world. The sprawling encampment, some say, is the largest gathering of Indigenous tribes since the Battle of Little Bighorn in 1876.

Shendo hopes to bring back the same mentality of advocacy and work ethic to New Mexico.

“The big challenge was coming back home and influencing your family, your community, your tribes,” said Shendo.

“The more we are, the harder it is to break us,” he said in a call for unity among native people to protect water rights. Shendo dreams of wider support in opposition to issues he cares about in New Mexico, like a recent auction of oil and drilling rights near Chaco Canyon.

The Bureau of Land Management auction has been denounced by Indigenous and environmental activists who fear fracking, a horizontal drilling technique, will endanger surrounding water sources.

Charleen Touchette, another activist present at the Roundhouse came to witness the signing of a declaration by New Mexico’s 23 Native American nations, tribes and pueblos opposing the pipeline in North Dakota. Touchette said she’s been working on Indigenous land and water rights since she was a teenager.

“We were taught that whatever happens to the water in one place affects the water everywhere, for everyone,” said Touchette.

Touchette said she opposed all type of fracking, mining, and pipelines that would negatively impact safe drinking water, including the recent BLM decision.

Native American officials also voiced their concerns about water rights and pointed to the Standing Rock protest as an influential motivator for continuing to fight against fracking and pipelines.

Ohkay Owingeh Pueblo Governor Peter Garcia, Jr. said he’s concerned about fracking near the main water sources for his community, near the confluence of two major rivers, the Rio Grande and Rio Chama.

“Water is our source of life…We hold water as very sacred,” Garcia said.

Garcia said tribes don’t get consulted enough on issues that affect their land and water.

While acknowledging that the state needs money, Sen. Shendo echoed Garcia. There are some places that need protection for non-monetary reasons, he said.

“There are certain places in this world that are sacred,” Sen. Shendo said. “They have no monetary value. It can’t always be about money. At some point we have to protect these places for future generations.”