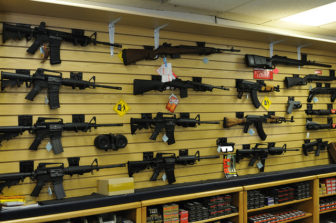 A gun control advocacy group that poured $216,500 into New Mexico’s 2016 legislative elections is finding at least one of its beneficiaries is a tough sell on expanding background checks for gun sales.

Everytown for Gun Safety donated $5,000 to then House Majority Leader Nate Gentry, R-Albuquerque, last June. The group also sent a mailer supporting Gentry, who is now the minority leader after Democrats regained control of the House.

But late Friday, Gentry joined other Republicans on the House Judiciary Committee in voting against House Bill 50, which would require background checks at gun shows or online, including gun sales by private individuals.

After extensive debate in two committees, the measure next goes to the House floor. A similar bill, Senate Bill 48, is moving through the Senate.

Meanwhile, the National Rifle Association reported spending $44,378 to a consultant for  “internet communications” last Friday as it battles the two bills.

The New Mexico Republican Party slammed House Speaker Brian Egolf, D-Santa Fe, and Everytown for Gun Safety in a news release after the bill passed the Judiciary Committee on a party-line vote.

“The legislation is being pushed by Everytown for Gun Safety, a group funded by (former New York City Mayor) Michael Bloomberg that funneled tens of thousands of dollars in dark money into a major super PAC to influence the outcome of several local legislative races,” the news release said.

Gentry doesn’t always oppose gun control measures. Last year, he introduced a bill aimed at requiring extra steps before a person determined mentally ill could buy a gun. The bill didn’t make it out of committee.

Bu he voted against HB50 last week, he said, because he found problems with several provisions, including one that would change the rules that govern private firearms transactions between gun owners.

Currently in New Mexico a gun owner may “transfer” a firearm to another gun owner without any regulatory oversight as long as it’s within New Mexico, according to the Attorney General’s Office.

HB50 would change that by requiring private citizens to go through a licensed New Mexico firearms dealer to make the firearm transfer.

The legislation would require a dealer to conduct a federal background check – not done currently in such transactions – using “the same regulatory process that would have to be followed if the firearm were being purchased directly from the dealer,” reads an analysis of the bill.

“When you add the private transfer prohibition it adds some wrinkles,” Gentry said.

In the past, Gentry has supported sharing certain gun sales data with the federal government and closing the gun show loophole.

But HB50 is “not well thought through,” he said, adding he found “five different problems they haven’t even contemplated. I just can’t support it. It takes some time. You got to get these things right.”

A volunteer with Moms Demand Action, which is part of Everytown, said she was surprised by Gentry’s vote.

“We’re perplexed by Representative Gentry’s vote as he’s previously been a champion on this issue and has even authored similar legislation in the past,” volunteer Cheryl Haase wrote in a statement. “Given that he didn’t raise any specific concerns with the bill during the committee hearing, we’re not sure why he voted the way he did.”

GOP spokesman Tucker Keene said he was unaware of Gentry’s support from Everytown for Gun Safety.

“I would be surprised if Everytown thought they could sway Gentry on guns,” said Keene, who sent the news release. Later, Keene texted, that  “you can’t honestly equate $5,000 given directly and openly to one legislator with $140,000 in dark money given to a Super PAC.”

Keene said the money is “a clear attempt to sway Democrat legislators to support a coordinated nationwide push against 2nd amendment rights.”

“It’s totally not true,” Egolf said. “No amount of contributions or lobbying is going to get around genuine concerns that members sincerely hold, and anybody who says we have to do something because of a donation is a fool.”

Even though the bill is slated for the House floor next, potential amendments are still being discussed.

“We are really slowing it down because members are coming to us with lots of changes,” Egolf said.

Among the provisions up for possible change: the language that requires new rules governing private firearm transfers.

“There are conversations about instead of it applying to all transactions maybe it will be back to gun shows, pawnshops, online sales,” Egolf said. “So there’s a lot of changes, and a lot of changes that are being made at the request of Democratic members who are getting feedback from their communities.”

Egolf was unsure when the bill might come up on the House floor.

“The soonest we can hear it under the rules is Friday but I don’t know if we will make that target,” he said. “We want to have a Democratic caucus meeting to talk about the bill.”

Meanwhile, the mailer sent by Everytown said Gentry “has led the charge for commonsense gun safety legislation that will protect families in New Mexico, like expanding the background check system.”

But Gentry also received $500 from a National Rifle Association PAC.

The NRA, which is opposing the background check bills, donated only $18,257 to legislative candidates and PACs during the 2016 election cycle. All that money went to Republican candidates and groups.

An NRA spokeswoman also blasted Everytown and its affiliation with Bloomberg, noting that the gun rights organization is mobilizing its members against the House and Senate bills.

The organization offers a link for members to compose letters to New Mexico legislators on several articles on its website.

Moms Demand Action also is active at the Roundhouse lobbying for the gun background check bills.

While candidates had to report Everytown’s individual contributions, it’s unclear how much the nonprofit spent on the mailer supporting Gentry.

And it’s unclear whether the NRA made independent expenditures in legislative races. State law doesn’t require national groups or nonprofits to report independent spending they make at the state level, or where the money they’re spending came from.

A campaign finance reform bill in the Senate likely would require disclosure of such spending.

Here’s a look at campaign contributions from Everytown and the NRA during the 2016 campaign cycle.