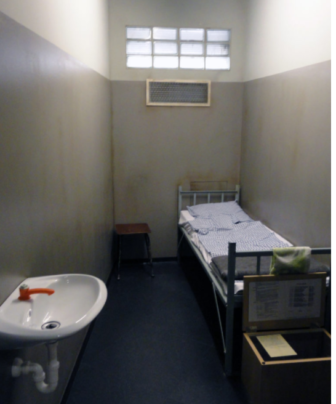 Modest restrictions on the use of solitary confinement in New Mexico’s jails and prisons easily passed the state Senate Friday. The House concurred with Senate changes later in the day.

House Bill 175 would forbid “restricted housing” — defined as 22 or more consecutive hours in a cell “without daily, meaningful and sustained human interaction” — for pregnant women in the state’s county jails and prisons and for children in juvenile lock-ups.

The measure also would limit how corrections officers and administrators in the state’s 28 county jails and 11 prisons can use the controversial practice on people living with or exhibiting signs of mental illness.

Early versions of the bill, sponsored by Rep. Antonio “Moe” Maestas, D-Albuquerque, placed a 48-hour cap on solitary for inmates with mental health issues. But objections from county officials and others led to a series of compromises, including longer stays in solitary for those inmates if they “pose an extreme and ongoing threat to another person.”

The House passed the bill last week 38-22. The measure passed the Senate on a 29-3 vote, with three Republicans voting against it: Greg Baca of Belen, Bill Payne of Albuquerque and Bill Sharer of Farmington.

Whether the governor will sign the bill remains to be seen.

“The Governor has 20 days from the end of the session to review and act on the legislation,” Michael Lonergan, spokesman for Gov. Susana Martinez, said. “As with any bill, she will carefully review and analyze it before making a decision.”

The reforms come as several other states and the federal government have curtailed the use of solitary confinement — which has been shown in numerous studies to exacerbate mental illness, create mental health problems where none existed before and distort brain development in children.

Joshua Saiz, a Farmington man who spoke with New Mexico In Depth last year, described how his mental health deteriorated during the course of the year he spent in solitary in Santa Fe’s state Penitentiary of New Mexico in 2013 and 2014.

Steven Robert Allen, policy director for the American Civil Liberties Union of New Mexico and an advocate for solitary reform, said he was pleased with the Senate vote on the bill, which he described as “noncontroversial.”

“I think this is a sign that the (Legislature) and New Mexico in general have come a long way in recognizing that this is a real problem in our state,” Allen told NMID shortly after the vote. “We would’ve preferred a stronger bill. In the past, we’ve proposed a ban on solitary for all inmates of 15 days or more. But this is a compromise process, the corrections officers and administrators needed to be at the table, and this result will help begin to address the problem.”

If signed by the governor, HB175 also will require the state Department of Corrections and county jails to file quarterly reports with the Legislature and county commissions detailing how many people they’re holding in solitary, how long they’ve been confined that way and what the plan is to move them back into general population.

Currently, lawmakers say county officials and the Corrections Department do not provide those figures. NMID also was unable to get an accurate picture on the scope of solitary confinement’s use around the state, despite multiple requests sent to officials for a story last month.

“Right now, we do not know on any given day if it’s 100 or 1,000 people in isolated confinement in the state of New Mexico,” Rep. Maestas, the bill’s sponsor, told NMID at the time.

This article has been updated to reflect concurrence by the House with Senate changes, and to include a comment from a spokesman for Gov. Susana Martinez.