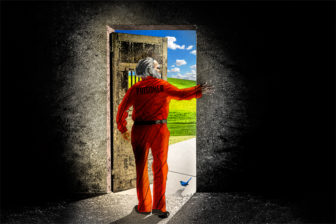 On the line was Carole Royal’s husband of 25 years, OC Fero. A caseworker from the Lea County Correctional Facility in Hobbs had handed the phone to him.

“I heard back from the Parole Board today,” Fero continued.

“Yes,” was all Royal could manage.

“They are granting me parole.”

“‘Oh my God, oh my God, oh my God’—I must’ve said it 20 times,” Royal tells SFR and New Mexico In Depth, remembering her reaction to the news on May 3. “For all these years, we’ve never run out of things to say to each other. And now here we were, kind of numb, in shock, unable to find the words.”

Under a 1980 state law, three- and four-member Parole Board panels must give those who have been sentenced to 30 years to life for murder a fair hearing and a chance at freedom every two years after they have served 30 years.

That hasn’t been happening, however, largely because Parole Board Chair Sandy Dietz has amassed near-complete control over the process, stacking it against would-be parolees, SFR and NMID found. Dietz once told the Albuquerque Journal she believes “life means life.”

Fero’s case was a prime example: He’d never been so much as accused of a crime before the February 1985 day he fatally shot his boss, Gallup-McKinley schools superintendent Paul Hansen. The two had argued over Fero’s employment.

He was convicted at trial and spent the next 30 years bettering himself in prison. Fero was ordained as a priest, tutored other inmates for their high school equivalencies, earned three master’s degrees and married Royal, his former colleague at the school district—all from behind bars.

None of that moved Dietz, who focused Fero’s March 2015 parole hearing solely on the crime. Fero got the news four days later: Dietz had denied him parole.

Almost exactly two years later, on March 22, a new panel—one that did not include Dietz—granted his appeal for life outside the prison walls.

“It took more than a month to tell him this time, and you really suffer, wondering,” Royal says. “I’m just really looking forward to no one telling us whether we can play cards or hold hands.”

She credits SFR and NMID for shining a light on the system that denied her husband parole the first time.

So does Sheila Lewis, a retired public defender who once worked as Fero’s appellate lawyer.

“I was initially really grateful when I heard, and absolutely thrilled,” Lewis says. “Then I remembered how many people are left behind in prison. That left me angry and motivated to keep fighting.”

Fero is one of 435 people serving 30-to-life sentences in New Mexico’s prisons. The Parole Board has heard 92 appeals since 2010. That’s when the 30-year lifers began to come eligible for release. Forty-four have had hearings; some of them as many as four.

Not all the news from a set of March 22 hearings was good from the perspective of Lewis and a small group of attorneys who have been advocating for some of the 30-year lifers to be released, and for a fairer system overall.

Board members heard an appeal from Walter Scott Finnell, who was convicted of murder, attempted murder and armed robbery in 1981. It was his fourth hearing. Dietz denied his release, once again citing the nature of the crime and not considering his relatively clean record as an inmate, according to Mark Donatelli, Finnell’s lawyer.

It is not clear which board members sat on Finnell’s panel. The board has been without an executive director since Sherry Stephens resigned shortly after the NMID and SFR story in March. Operations Director Megan Moreno did not respond to multiple requests for comment for this story.

Donatelli and Lewis were among those who supported proposed legislation to require the Parole Board to make a detailed finding that the inmate is “unable or unwilling to fulfill the obligations of a law-abiding citizen” before denying parole. The bill died in a House committee after Gov. Susana Martinez, who reappointed Dietz to the board’s chair in 2015 and sings her praises, vowed to veto the measure. Now, the attorneys will take the push for reform to the state Supreme Court, Lewis says.

About 10 attorneys plan to file habeas corpus petitions, essentially saying that the conditions of their clients’ confinement are unconstitutional because the board is not providing full, fair parole hearings.

“The article changed the field legally,” Lewis says.“I think we can demonstrate now that these are sham hearings. The Legislature spoke loudly and clearly in 1980. They said, ‘Taking a life is very serious, and the punishment for that is 30 years.’ But the Parole Board has an obligation to identify a pathway out of prison. They aren’t doing that, and we believe the court will recognize that.”

Royal has testified in front of legislative committees about how the Parole Board’s “arbitrary” practices have impacted not just her husband’s chances for release, but other 30-year lifers, too.

She and Fero are optimists, an outlook rooted in their religious faith. But their conversations had turned to large-scale life changes after Fero felt his second hearing may not have gone well in March.

“It takes six hours to drive down to Hobbs, and I told him I wasn’t sure I could do that anymore,” Royal says. “I was thinking of maybe selling my house and moving closer to the prison.”

That all changed last Wednesday when the caseworker called. Fero still has some hoops to jump through—a DNA test, a psychological evaluation—before his release in a few weeks.

Royal will drive to Hobbs and pick him up. She’s eager to put him to work pulling weeds.

“It has entered my mind that this might never happen,” she says. “I think I dealt with that before I married him. But now, just being together like this—I’ve just always enjoyed his company so much.”