Charlie Garcia adds glue and cotton balls to her “popcorn box” in a small group activity at Alpha School in Las Cruces,

Jockeying for what little new money is expected for the coming fiscal year has already started. Children, Youth and Families Secretary Monique Jacobson is seeking $26 million more for her department, mostly to cover the growing cost of subsidized child care in New Mexico.

She told members of the Legislative Finance Committee on Wednesday that the cost per child for day care and early education has risen from about $312 per month in 2012 to $535 in 2018. That reflects increases in reimbursements aimed at increasing the quality of programs and improving worker pay and education.

While looking at early childhood education efforts in Dona Ana County I waded pretty deeply into the weeds on access to high quality childcare in the state.

There are some drivers in this big bump in compensation for childcare and early education providers in the state. The biggest has been the new rating system, called FOCUS. It rewards childcare providers who drop their child-teacher ratios and send their caregivers and early childhood educators to state-sponsored training.

Here’s a chart from CYFD’s first New Mexico Child Care Data Report which shows where some of the cost is going: 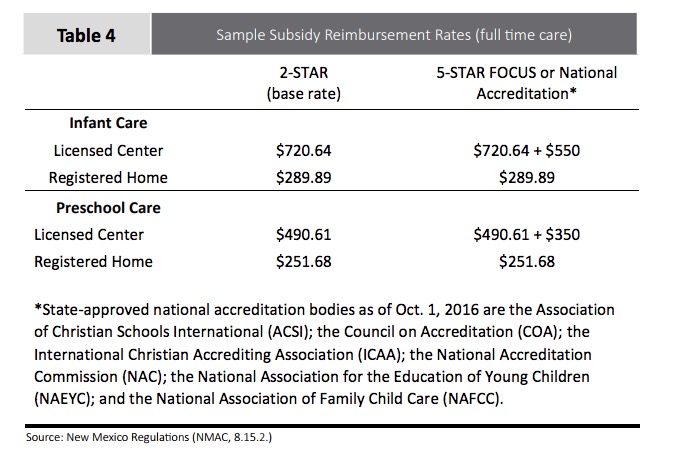 A five-star childcare provider gets a $550 per month boost for higher quality care in this sample reimbursement from the Children Youth and Families Department.

It’s a comprehensive report, and shows that more and more children are moving into quality licensed care, from 11 percent of kids in centers ranked three star and above in 2005, to 54 percent in 2016. And, when children get childcare from 4- and 5-star centers, the results are being seen in school readiness and test scores, according to data from the Legislative Finance Committee.

All that costs money, and Jacobson wants to put that money where CYFD’s mouth is.