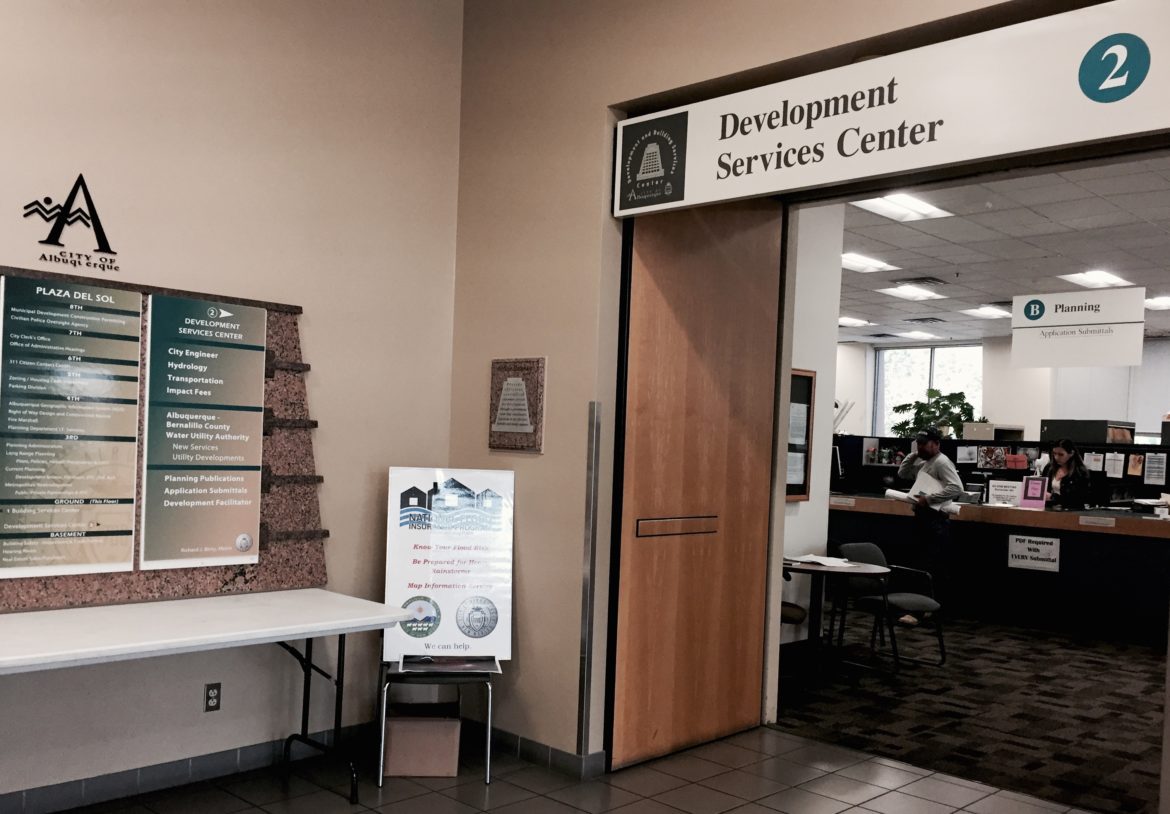 An often heard saying about elections is that candidates spend their time asking anyone they can find for money to fund their campaigns. The amount of money being raised and spent so far in the Albuquerque mayor’s race is already an unprecedented $2,646,494. But a look at the campaigns of the three candidates raising the most in private dollars suggests one constituency is being asked a lot more than others.

The real estate and land development sector has given roughly $1 of every $4 raised so far in the Albuquerque mayoral race once you subtract public financing dollars for one candidate and a half-a-million-dollar loan another candidate gave to himself, an NMID analysis shows.

No other sector even comes close in its giving power, according to the analysis. The next closest group — attorneys — gave less than a third of what the real estate and land development sector did.

A wide range of construction-related businesses, real estate industry professionals and companies, and land developers gave more than $476,000 of the $1,788,574 in privately donated cash or in-kind support collected by mayoral candidates.

And within that sector, significant sums have come from interwoven groups of individuals or entities. Some contributors have donated individually, their companies and partners have contributed, and so have their family members.

That this particular economic sector would account for such large sums at the local level isn’t unusual, according to people who study the role of money in our political system.

“Groups with shared economic interest tend to get tightknit, form groups that are influential, and having money, are able to support candidates,” said Ed Bender, executive director of the National Institute on Money in State Politics, in an interview.

Professor Timothy Krebs, a political scientist who specializes in the study of urban politics at the University of New Mexico, said it’s not unusual to see the development community spend such significant money on a mayoral race. That’s because city officials routinely make decisions about zoning and infrastructure that have a direct effect on the profitability of their companies, he said.

“The one thing city officials control very directly is how land is used. And that’s very important to these industries,” he said.

Looking at the numbers, one group stands out 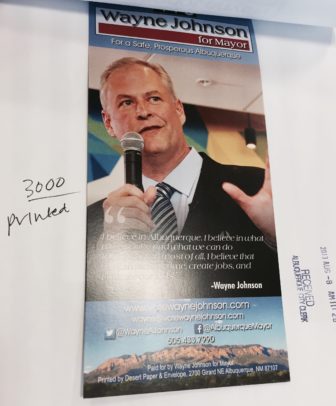 New Mexico In Depth discovered the sector’s monetary power after wondering what interest groups in Albuquerque were donating the most to the mayoral campaign.

A review showed a lot of cash in the race that isn’t coming from particular economic sectors. State Auditor Tim Keller has public financing plus about $38,000 in in-kind support, for $417,348 to date, and Ricardo Chaves, a local businessman is funding his own campaign to the tune of $522,197.

There are also numerous measure finance committees (Albuquerque’s version of political action committees) through which private money is being raised and spent this election cycle. One of those is specifically formed to advocate for Keller, with 40 percent coming from labor unions.

But NM In Depth was interested in the private support flowing directly to candidates from individuals and businesses, so narrowed its analysis to the three privately funded candidates who’ve brought in more than $100,000 each: attorney Brian Colón, City Councilor Dan Lewis and County Commissioner Wayne Johnson. Three other mayoral hopefuls have raised nominal amounts, and along with Keller and Chaves aren’t included in this analysis.

It quickly became clear when looking at the numbers that one group inextricably tied to city government is donating far more than other groups — those companies that buy, sell and develop land.

The real estate and development community accounts for at least $476,290 of the nearly $1.8 million in private donations. Cólon and Lewis received 28 percent and 27 percent of their campaign funds from the sector, respectively. Johnson, whose wife owns a real estate business, raked in 33 percent of his cash from the group. (Read our methodology for deriving these figures.) 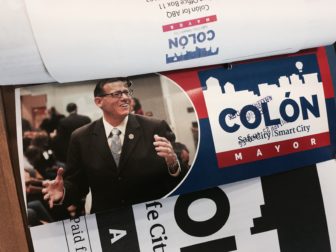 Mayors have a lot of control or influence over basic functions of government, including policing, general public safety, and social services, said Krebs. And they set the tone and appoint the people who handle the day-to-day operations affecting a range of decisions related to land use and development.

For instance, on Albuquerque’s Environmental Planning Commission (EPC), a majority of the nine seats are held by members of the real estate and development economic sector. They were appointed with the advice and consent of the City Council by Mayor Richard Berry, who comes from the construction industry.

The EPC wields significant decision-making authority over land use and development plans. It approves site development plans required by the city for special use zones and shopping centers. And it’s allowed to approve most zoning change requests. While decisions of the EPC can be appealed to the City Council, the EPC’s status as a body that routinely provides recommendations to the Council on a range of other planning and development decisions ensures that its decisions carry a lot of weight.

Krebs said such commissions need people with expertise, like real estate and construction professionals, to ensure they are able to make sound decisions. Bender agreed. An analogy, he said, would be doctors serving on hospital boards.

But when combined with large sums of campaign donations, the potential for undue influence has to be acknowledged, said Krebs.

NM In Depth has identified multiple instances in which candidates received significant sums from groups of interconnected individuals or companies.

Have a look at the campaign contributions to date and tell us what you find interesting. We may publish what you find in our next story. Find the data here: http://bit.ly/2fggMtg. Message NMID here: marjorie@nmindepth.com

One notable example within the development community is a group of donations associated with Steven Chavez, a developer and businessman who heads up SC3 International. Donations have been made from individual companies he owns, a prominent development partnership he announced last year, and from his family. Most of that money has gone to Cólon, but Lewis and Johnson have benefited as well.

Chavez gave $5,150 to Cólon as an individual, with his occupation in city reports described as “business owner” and his employer as Integrated Control Systems Inc. (or, ICSI). Two other SC3 International companies each gave $5,000 to Cólon, Ekore and Mechanical Control Solutions. And his son, Nick Chavez, gave $2,000, listing SC3 International as his employer.

In addition to these direct donations totaling $17,150, Gold Mesa Investments LLC gave $5,150 to Cólon. Chavez is a principal partner in Gold Mesa, which last year purchased 80 acres of Mesa del Sol land and two buildings previously owned by Schott Solar with plans to develop a commercial and industrial park. Altogether, these donations to Cólon total $22,300. 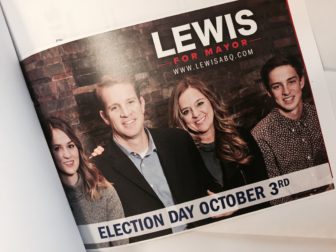 Chavez hasn’t reserved his largesse for Cólon. He also gave $6,200 to Dan Lewis as an individual, listing Wise Pies as his employer. Lewis also received donations from Chavez companies Wise Pies and Integrated Construction Services2. Another of his Gold Mesa partners, Guzman Construction Solutions, gave $2,500 to Lewis, and as this article is published, a fundraiser for Lewis has been announced sponsored in part by Chavez, Guzman and Daskalos.

New Mexico In Depth reached out to Chavez to find out why the mayor’s race is so important to him, including a list of contributions detailed above for him to review, and asking if there were additional contributions from companies or partnerships in which he is involved. NM In Depth has not heard back from him.

That cash from an interest group would be spread among several candidates isn’t unusual, said Krebs.

“Usually the business community gives to both sides, they are more pragmatic than ideological,” he said.

Nor is it fair to assume candidates will do the bidding of their donors automatically. It could be, Krebs said, that the development community looked at the field and decided to support candidates who they believe will represent their interests.

Still, it’s legitimate to ask what impact such donations have on democracy, he continued.

“The question from a representative government standpoint,” he said, “is to what extent does the development community have a disproportionate impact on the decisions that impact neighborhoods and daily lives. That’s a legitimate question. We have decades of research at the city level showing they have real power.”

New Mexico In Depth asked in an email to each of the three candidates — Cólon, Johnson and Lewis — what they would tell voters who might question how these contributions might benefit the givers.

Brian Cólon said in a voicemail that all of his contributors, including developers, have a “vested interest” in the future of Albuquerque and believe he’ll fix a crime epidemic that is hindering creation of jobs.

Wayne Johnson said in an interview that the people giving to his campaign believe in his vision and record.

“They see how I operate, and know that a growing economy is in their best interest and the city,” he said. “They are looking for a mayor who will grow the economy and understands that business interests are very important.”

Dan Lewis has not responded.