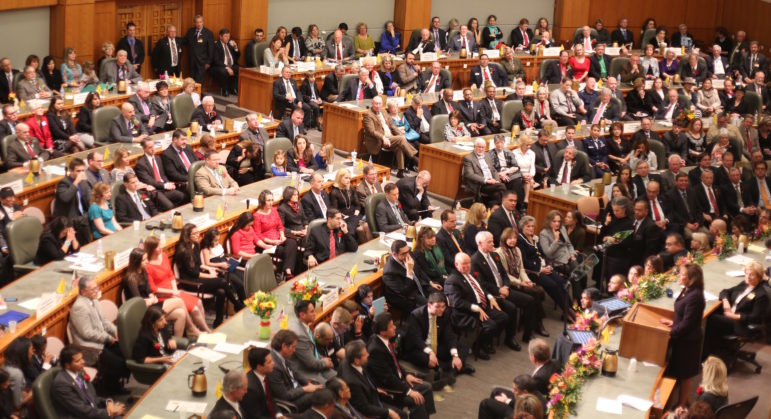 The average lawmaker in America is a “white, male, Protestant baby boomer with a graduate degree and a business background,” according to an analysis by the National Conference of State Legislatures. In short, the establishment looks a lot like it always has.

And the status quo is extremely difficult to change. Incumbency is the one thing that most certainly determines whether a legislative candidate will win. An incumbent who is good at raising money won 94 percent of the time, according to a national analysis of 2013-2014 legislative races conducted by The National Institute on Money in State Politics.

In Santa Fe, all but six of the senators who will take office in 2017 are returning to the Roundhouse; in the House only 12* of 70 are new.

In Santa Fe, lawmakers are in some ways more diverse than their counterparts in other states. They’re more Hispanic than lawmakers elsewhere, but as a group they’re slightly whiter than the state. Nationally, Hispanics make up about 13 percent of U.S. population but only 5 percent of state lawmakers. New Mexico is about 46 percent Hispanic and 40 percent Anglo; the 2017 New Mexico Legislature will be about 54 percent Anglo and about 38 percent Hispanic. Native Americans are underrepresented—they’re about 10 percent of the state but only 6 percent of lawmakers.

Folks from other states might look at our Legislature’s 2017 class picture and think it wildly misrepresents African-American voters, but New Mexico’s two black lawmakers are roughly proportional to the 2 percent of the state that’s black.

The number of women serving in the New Mexico Legislature has gone up and down over the years but it still doesn’t reflect the fact that women make up half the state.

There will be 33 women in the state House and Senate this year, making the New Mexico Legislature nearly one-third female. The national average is 25 percent.

In the early 1970s very few women served in statehouses—only 4 percent of lawmakers were female then. The overall picture is that there are more women in office, but the growth is slow and women are still underrepresented in the halls of state government.

That means women’s perspectives are not heard as often, says Liz Stefanics, a Santa Fe Democrat who served one term in the state Senate in the early 1990s and was reelected in November.

For example, more women spend time taking care of their own children, looking after grandchildren and caring for aging parents. So they might be more likely to support things like paid family leave.

Stefanics also notes that the vast majority of teachers are women, but a great majority of the people making decisions about education are men. “If more men were teachers, would that change how we treat teachers?” she wonders.

Any visitor sitting in the gallery can see one obvious way state lawmakers look different from the state as a whole: They are much older. The average age of the incoming House member is 56; in the Senate it’s 60. In contrast, the median age of a New Mexican today is 37.

Our lawmakers are a little older than the national average of 56 for state legislators, while our population is just a little younger.

One quarter of New Mexicans today are in their prime working years, between 25 and 44. But the unpaid nature of the job as a state lawmaker means it’s more accessible to those who are retired, people whose work is very seasonal (think: farmers) and those who are wealthy enough that they don’t need to work full time. Asking people to work for free (aside from travel reimbursements and per diem) presents a significant barrier to service, particularly among younger people.

“The reason you don’t see younger people in the Legislature is because we can’t afford to do it,” says state Democratic Sen. Jacob Candelaria, who is 30. “That’s the reason. Pure and simple. 100 percent.”

Of course older lawmakers can bring some highly desirable qualities to the job, including institutional knowledge and the broad perspective that comes with a lifetime of work and life experience. “My colleagues bring a stability and a wisdom that I lack,” Candelaria says.

The problem with lawmakers who are much older than the constituents they serve is a generation gap. Millennials, who are mostly in their 20s and early 30s, are the country’s largest living generation. Compared to Baby Boomers, Millennials are more diverse, more globally oriented, more culturally tolerant—and they were the hardest hit by the Great Recession.

“Conversations about technology, legalization of marijuana, transgender rights, those are some issues where we’re not bridging a political or policy gap, it’s a generational gap,” Candelaria says.

Another thing that pops out as you scroll through state lawmaker’s official web pages is that a lot of them are lawyers—nearly 20 percent. The vast majority went to college and more than half have graduate degrees.

That makes sense, says state Rep. Alonzo Baldonado, a Republican who has a real estate business in Los Lunas. “When you look at the folks who run, maybe they’re more likely to think they have something to bring to the table, whereas the person who made your lunch today is more concerned with putting food on their own family’s table.”

Baldonado mixes legislative work with his real estate business most days and he’s cognizant that that’s a luxury many New Mexicans don’t have. “Most people will tell you they had to put their entire life on hold just to campaign. If I didn’t have the kind of business I have I couldn’t do this.” In terms of that kind of workplace flexibility, real estate is similar to law.

“There’d be a better conversation,” if there were fewer people with advanced degrees and more “regular New Mexicans” in the Legislature, Baldonado says.

Unpaid service is a stumbling block to diversity

On the day we spoke, Baldonado said he had worked on real estate projects, then met with Sen. Bill O’Neill, D-Albuquerque, about a bill they’re co-sponsoring, then went back to real estate work and planned to meet later with county commissioners.

He believes paying state lawmakers would open up opportunities to many more people.

But the political barriers to a paid Legislature are formidable—and obvious.

Voters would have to approve a change to the state Constitution, and history shows New Mexicans haven’t liked the idea the four times it went to ballot in the 20th century.

Plus, what kind of politician wants to vote to pay himself?

“How do you get a more representative body?” Baldonado wonders. “Maybe you have to look outside what you’re doing now.”

*As this publication went to print, Rep. Don Tripp, R-Socorro, had just announced his resignation. When the legislature convenes, there will be 13 new legislators in the House.