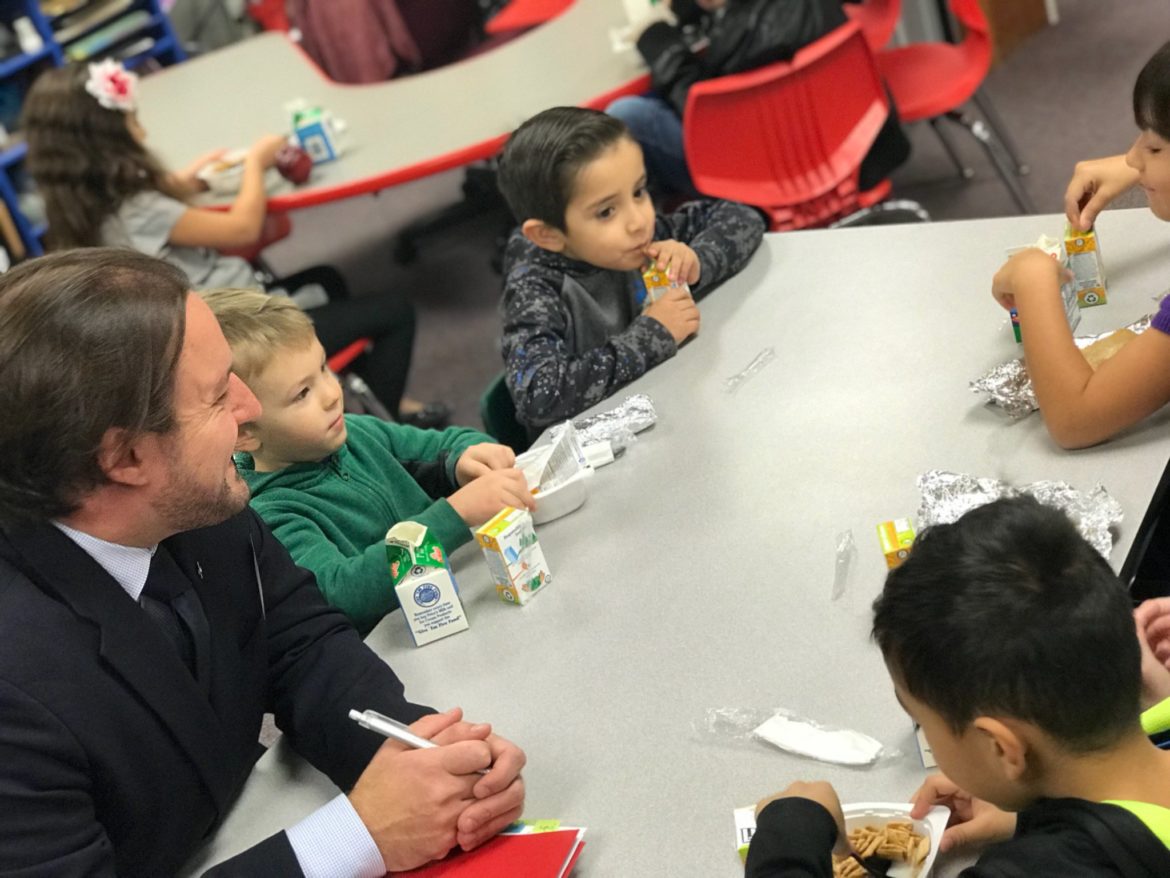 Education Secretary Christopher Ruszkowski joins students from Chaparral Elementary in Deming for Breakfast before the Bell in November. The secretary testified in a lawsuit against the PED over whether the state is adequately funding education in New Mexico.

Students in New Mexico are nowhere near prepared to go to college, join the workforce or engage in our democracy, according to closing arguments filed this week by the New Mexico Center on Law and Poverty and MALDEF, in a lawsuit against the state. The groups, representing families and school districts,  say the state Public Education Department isn’t providing the resources needed to properly educate its students, in violation of the state Constitution.

“The problem is that for years the state has starved our public schools and denied our children the educational supports and programs and services they need so that they can learn and thrive,” said Gail Evans, legal director for the Center, who said she expects a decision from District Court Judge Sarah Singleton by the spring.

Lawyers for the state PED agree that New Mexico schools need to improve and concede the job of the schools is to make students college and career ready. But that’s about all they agree on. “Plaintiffs must prove a complete failure of the system such that the right of education for New Mexico school children is an empty promise,” the state argued in the brief it submitted to the court. Lida Alikhani, spokeswoman for the PED, released its closing arguments but did not provide any comment on the case to New Mexico In Depth.

Lawyers for the plaintiffs said during a conference call briefing on the case that they believe they’ve proven that empty promise. They said the state’s last in the nation ranking and dismal results on standardized tests are evidence that proves the state is failing students. And, they say, those results are even more dismal for the at-risk students they represent: English language learners, Native Americans, low-income students and special education students.

“When you look at those results, you see that for example, only 5 percent of English language learner students are meeting expectations in math by the time they are in 11th grade,” said Martin Estrada, a partner at Munger, Tolles & Olson LLP and co-counsel for MALDEF.

The PED’s lawyers filed a 131-page brief that defended school funding, saying education was New Mexico’s top priority, which was evident by its being the largest single expense in the state budget, that the school districts involved in the case never spent all the money allocated to them by the state and rarely asked for emergency supplemental money. And, the brief argued, student proficiency alone does not prove that kids in New Mexico are not being given their constitutional right to a sufficient education. “Experts for both sides testified that educational outcomes are largely determined by out-of-school factors that can not be improved by the school system.”

The groups asked the court to declare the PED in violation of the New Mexico Constitution’s Education Clause; to order the state to develop and implement a court-approved comprehensive education plan by the 2019-20 school year; provide “sufficient” funding for public schools; revise the formula for delivering state funds in a way that targets at-risk students; and to set up an accountability and monitoring system. The closing arguments asked the courts to take jurisdiction of the school system, and “we would expect the court to retain jurisdiction for however long it takes to make the education system constitutional,” said Ernest Hererra, staff attorney for MALDEF.

The advocacy groups said, however, they didn’t foresee the court telling the Legislature how and where to get the money to fund education.

“How the state comes up with the money to make that happen is the state’s choice. But it’s the courts obligation to say, ‘yes you need to do it,’” Evans said.

One of the biggest bones of contention in this case is applying what’s called the “Rose Standards” to the New Mexico school system:

Rose vs. Council for Better Education, a 1989 Kentucky case, has been used in several lawsuits over whether states are are appropriating sufficient funding for education. It changed the conversation about whether funding for individual school districts was “uniform and sufficient” to whether the system as a whole was adequately funded.

Though the consolidated Yazzie and Martinez lawsuits were originally filed in 2014, with a two month trial in the summer before a Santa Fe judge, this is only the end of the beginning of the case. However Singleton rules later this year the case will most likely be appealed to the state Supreme Court, which means any changes to how New Mexico schools are funded as a result of this case will also likely be years away — that is, unless, a new governor decides to change course when he or she takes up residence in the Governor’s Mansion.

You can read the MALDEF brief here, the New Mexico Center on Law and Poverty here, and the state PED’s brief here.