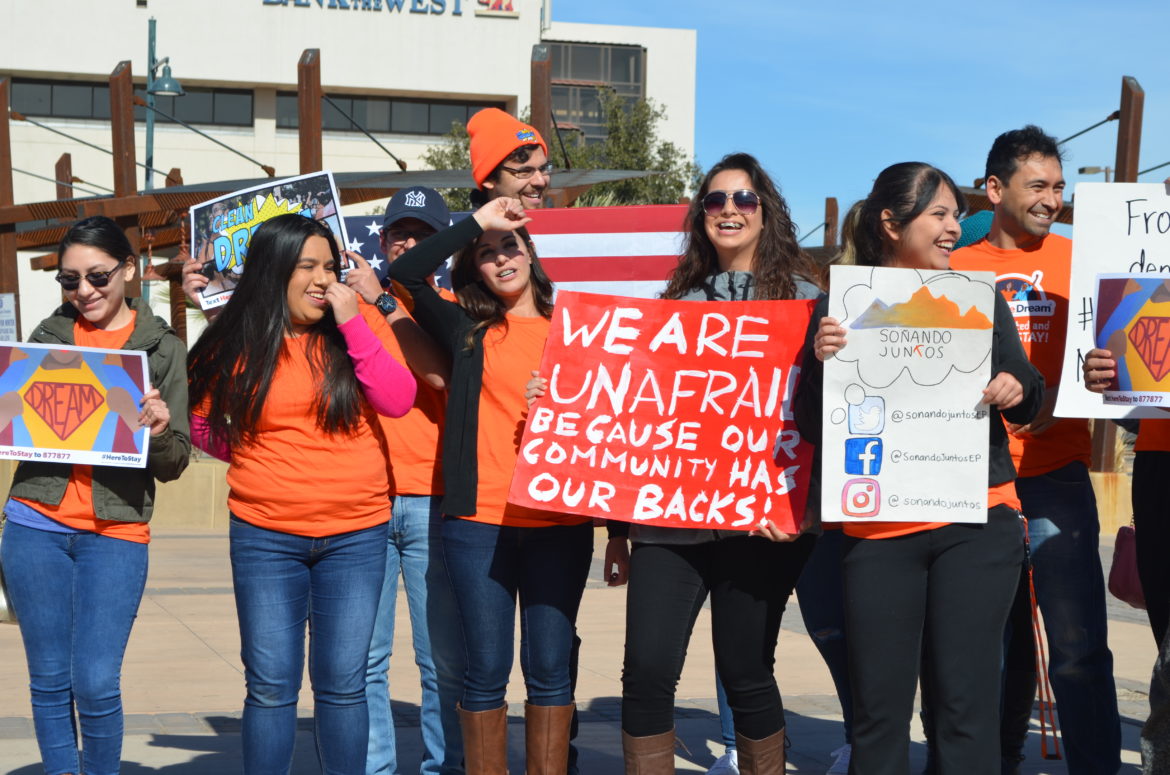 Second from left is Lizzeth Sandoval, one of three DACA recipients and approximately 20 to 25 members and supporters of the New Mexico Dream Team that attended Friday's demonstration in Las Cruces. Photo Credit/Xchelzin Peña

Organized by the New Mexico Dream Team, the individuals came together at the plaza Friday to rally and to give their thanks to U.S. senators Martin Heinrich and Tom Udall for opposing a government spending bill that didn’t include a deal on the federal Deferred Action for Childhood Arrivals (DACA) program.

The Dream Team is a chapter of the United We Dream organization, a national immigrant rights network led by young people.

Congress has until March 5 to pass legislation that protects Dreamers — a commonly used name given to undocumented immigrants who were brought to the U.S. as children — from deportation. That deadline was set by President Donald Trump when he rescinded the DACA program last year.

The debate over DACA took center stage in unsuccessful negotiations in Washington to avert a government shutdown early this morning.

Congress was divided on what to include in a spending bill that would fund the federal government for three more weeks while negotiations continued. Republicans included reauthorization of the Children’s Health Insurance Program (CHIP), which provides low-cost health insurance to 9 million children until the Republican-controlled Congress let it expire in September.  But Democrats like Sen. Martin Heinrich and Sen. Tom Udall demanded the agreement also include a solution to the plight of hundreds of thousands of young Dreamers.

Heinrich wrote in an opinion piece that Republicans and Democrats are close to agreement on numbers. They both have agreed that CHIP needs to be extended and parties have a bipartisan deal on the table for DACA recipients.

“But to actually pass anything, the bill put forward needs to have bipartisan support here in the Senate,” Heinrich wrote.

DACA recipient Lizzeth Sandoval who attended Friday’s rally said the Dream Team did not hear a word from the senators about their standpoint until the organization pressured them.

“At first they (Sen. Heinrich and Udall) didn’t come out and say that they would stand with us or that they weren’t going to vote. So, we pushed them to stand with us and to not vote for a spending bill that wouldn’t contain the Dream Act,” Sandoval said.

The office of Republican U.S. Rep. Steve Pearce did not respond to an email sent Saturday seeking comment on the shutdown. Pearce has said he would work in a bipartisan manner to ensure a deal for DACA recipients .

The 20-year-old from Juarez, Mexico said the senators’ decision led the group to publicly thank them for their support, but the feeling of fear lingers.

“I have 203 days left,” Sandoval said. That’s the number of days before she can renew her application.

Due to a federal court order, USCIS has resumed accepting requests to renew a grant of deferred action under DACA.  Until further notice, and unless otherwise provided in this guidance, the DACA policy will be operated on the terms in place before it was rescinded on Sept. 5, 2017.

The site also mentions that deferred action under DACA does not confer legal status upon an individual and may be terminated at any time, with or without a Notice of Intent to Terminate, at the Department of Homeland’s discretion.

Sandoval came to the United States with her family when she was 5 years old. She has four siblings and the only citizens within her family are her 24-year-old sister and 11-year-old brother. Her parents are undocumented.

Lizzeth said the threat of deportation would be difficult on the family, especially for her young brother.

“I think he would be the one that needs them the most, and I’m afraid of him going down the wrong path in case of getting separated from my parents,” Sandoval said.

As the group talked to reporters and with each other, Sandoval met Angel Peña, a candidate for 2nd Congressional District.

“Today the Dreamers all got together to make sure that their voice was being heard. They are here to thank Senator Martin Heinrich and Senator Udall for standing with Dreamers,” Peña said.

The group traveled from the downtown plaza to Udall’s office, but authorities were later called because his office is in a private building. The demonstration moved to Heinrich’s Office.

“We’re not here to do wrong, we’re here to make a better future for us and our families.” Sandoval said.