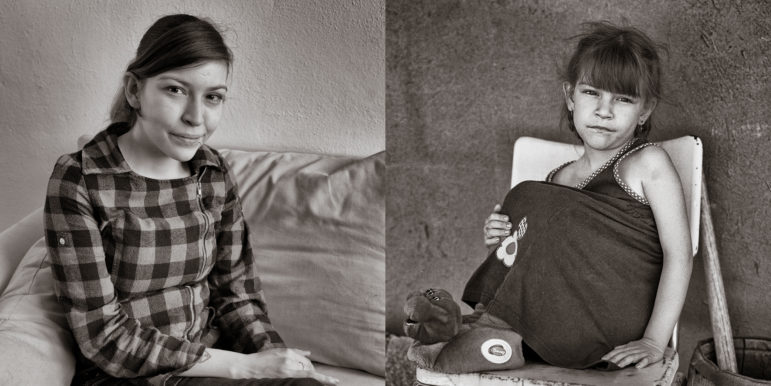 “My name is Cinthia Yaneli Muñoz Fierro,” the young woman announces, introducing herself in the Mexican custom with all her given and family names.

“I was supposed to be born, as far as my parents’ plan, in El Paso,” she says. “That would have given me dual citizenship. But because my mom didn’t make it across in time, I was born in Juárez, Chihuahua. And right now, I am technically just an illegal immigrant; I don’t have U.S. citizenship whatsoever.”

Cinthia doesn’t remember crossing la frontera at age 3, but that twist of fate thrust her into a legal bind from which she hasn’t yet managed to extricate herself. And it wasn’t the only twist of fate to shape her life.

“When I was born, something happened, and I was born different,” she explains.

That something was cerebral palsy.

While it inflicted an awkward limp, bringing ridicule from classmates, the citizenship issue affected her adult choices as she got older.

I met Cinthia when her mother, Meli, was hired to help care for my grandmother, who was then 101 years old. We didn’t ask about their citizenship; we were just happy to find someone who was loving and able to help us.

The scrappy 3-year-old I met in 1999 — soon after her arrival in the U.S. — is part of a special class of undocumented immigrants, those who came to this country as children. Federal policy for a time offered these arrivals a path to citizenship. Today, however, their status is caught up in a political football game – the fight over DACA – played out by powerful people thousands of miles away.

“I remember how happy my mother was when she told me that I could live with her in Chimayó when she worked taking care of Grandma Benigna,” Cinthia recalls, referring to my grandmother as if she were her own.

Those happy days didn’t last long. My grandmother passed. Meli moved to take care of an elderly man — then another, and another. Cinthia enrolled for a year at the preschool where my wife worked, but we eventually we lost track of her.

She and I recently reconnected on Facebook. She told me she and Meli had led a peripatetic existence since I last saw them.

“I don’t even know how I ended up here,” Cinthia muses. “I just remember living with a bunch of different people — for a time with my brother and his entire family in this one little trailer. We all had to crowd with each other — all the kids had to sleep in one designated area and the adults in another — my brother, his wife, his kids, their cousin’s kids, or their cousin’s cousin’s kids …”

Her education paralleled her shifting home life. Each year, she attended a different elementary school, trying to make new friends and stay away from the bullies who browbeat her about her limp.

“I had a lot of struggles, and not just getting along with people, but explaining about my leg, because I would always get pointed out: ‘Why do you walk different?’” she says.

When her mother found a job in Pojoaque Valley, they moved yet again. It was Cinthia’s senior year of high school, and she began to excel and make friends; more importantly, she met a social worker who reviewed her educational history and determined she hadn’t been receiving required services. One of those was physical therapy.

She began visiting the University of New Mexico’s Carrie Tingley Hospital, where she was treated and her leg re-evaluated. Surgery eventually helped improve her mobility.

But once again, their peripatetic existence undermined her chances.

“They did help me out a lot in Pojoaque,” she says. “But I didn’t graduate there because things happened with my mom’s job again and we moved back to Santa Fe, and she didn’t have enough money to drive me to Pojoaque.”

Instead, she quit school and married Alex, her high school sweetheart. Two years later, they enrolled in an online learning program from which they graduated last summer.

“We actually managed to pull it off!” she declares triumphantly. “And I am the only one in the family who legitimately has a high school diploma.”

But the issue of her citizenship continues to loom large. Though she landed a good job with a cell phone company, she had to leave it once the manager made clear he would no longer tolerate undocumented people on his payroll.

“It has been kind of hard to find work, and I’ve been just babysitting. When I was little, I didn’t really think that not having citizenship would be a struggle, but now I’ve seen that if you don’t have a social security number, many places, even some hospitals and some doctors don’t want to see you. And most places won’t hire you.”

She and Alex were evicted from their home on Christmas Eve, but while neither one has solid work prospects, she remains optimistic – dreaming, she says, about eventual citizenship, steady work and stability.