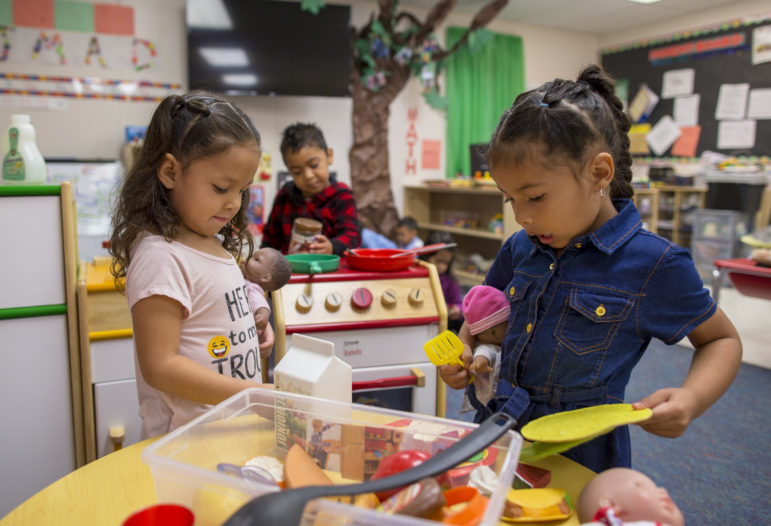 Melanie Calderon and Yaren Martinez play in the children’s kitchen at a Head Start program for 4-year-olds in Anthony, New Mexico. Head Start is a federally funded early education program that serves about 7,300 children statewide.

For almost 30 years, New Mexico has maintained an iron grip on the bottom rung of key rankings.

Why is it that even when the state makes improvements in education, health care or the economy, we barely budge?

Each year, the Annie E. Casey Foundation ranks the 50 states on issues of child well-being. The report is a widely used measure of children’s health and education, and of the economic and social well-being of families. New Mexico was No. 49 this year, a notch above Mississippi.

The state’s dismal showing year after year matters because of what the underlying statistics tell us about the hard lives kids face at home and the poor state of education. They spotlight the worst this state has to offer, creating an obstacle to economic development that could bring money and jobs to the state, lifting families out of debilitating poverty.

The Casey report isn’t the only ranking out there. Education Week magazine’s annual report, “Quality Counts,” ranked the state 49th for K-12 education. WalletHub, a personal finance website, just designated New Mexico as the worst state to raise a family – for the second year in a row.

But when it comes to children’s issues, Casey’s annual Kid’s Count is the one that commands attention. Year after year, that report has put New Mexico’s kids at or near the bottom of the national ladder on almost every key indicator: the number of eighth-graders not proficient in math; the number of high school dropouts; the percentage of children living in poverty.

Despite such grim findings, however, experts say the state has made some significant progress.

Between 2012 and 2016, New Mexico improved in eight of the 16 Casey Kids Count measurements related to poverty, health, education and family and community. Most improvements were slight, but some were dramatic.

New Mexico saw no change in three indicators and worsened in five others.

The state’s rankings, meanwhile, deteriorated in areas of economic measurements, sometimes significantly: We fell five spots to No. 20 in high housing costs and five spots to No. 48 in children whose parents lacked full-time or year-round employment. In the percentage of babies born at a low birth weight, New Mexico plunged from No. 25 to No. 38.

Over that same five-year period, the state’s overall ranking for child well-being went from 49th to 50th, then back up again to 49th.

So, did we do better, worse or stay the same?

The ranking is not based on how a state compares to a national average; it’s based on how it compares to other states, said Laura Speer, associate director of policy, reform and advocacy at the Casey Foundation.

“Compared to other places, we’re still 49,” Speer said. “In la-la land, you could say New Mexico got better, but other states got even better.”

“That,” Gutierrez said, “is the problem with rankings.”

For Kids Count, the aim is to tie data to the issues facing children — not so states can get gold stars or big red Fs, but so policymakers can frame solutions.

New Mexico’s Voices for Children, a nonprofit advocacy group, conducted a study  last year to show exactly what it would take to move the needle. Because of the state’s relatively small population — New Mexico ranks 36th with just over 2 million residents in 2017 Census estimates — on some key indicators it wouldn’t take much.

According to the study, laser-focused policy can make a difference.

For example: Preventing low birth weight in just 120 babies would catapult the state to the middle of the pack in that category, according to the Voices study. Helping connect just 530 teens to school or work would push New Mexico from 40th to 32nd on the “teens not in school and not working” statistic. Preventing the untimely deaths of just 80 children and teens would move New Mexico to No. 1 in the nation for the lowest level of child and teen deaths.

When it comes to policymaking, “there tends to be more impact when you are targeted,” Speer said.

Comparing top states to those at the bottom rung can also hide the fact that life for poor children is equally hard, wherever they live.

Massachusetts and Minnesota, for instance, often top lists of the best places to live. They have good schools, low unemployment rates and enviable health care systems. They are headquarters to giant companies including General Electric, Target, Reebok and Best Buy, major-league sports teams and top-ranked universities.

In 2017, Massachusetts took No. 2 and Minnesota took No. 4 in the Kids Count rankings.

Still, by many measures, including poverty, New Mexico remains a tough place for kids to grow up.

Compared to the national average, more of this state’s children are growing up in single-parent homes or with parents who lack secure employment. A greater percentage of the state’s kids live in areas with high concentrations of poverty, where teens are more likely to get pregnant and kids are less likely to graduate high school.

Those problems translate into perennially low rankings, which can cause hopelessness among policymakers that compounds rather than helps solve the problems.

Veronica Garcia, former executive director of New Mexico Voices for Children, says she didn’t fully understand the effect of being at the bottom of the pile for so long until she moved from her post as secretary of education under Gov. Bill Richardson to head Voices.

In 2012, when the first Kids Count rankings of her tenure were announced, New Mexico fell from 46th to 49th. She was sure that would grab people’s attention, but it didn’t.

“You know, it was like a yawn,” she said. If anything, the repeated low-tier rankings had become background noise.

Even though there isn’t much of a statistical difference separating the 49th and 50th slots in the rankings, it took the worst possible ranking – last – to finally wake people up.

One thought on “Life on the bottom rung: While imperfect, national rankings can help spur policy change”