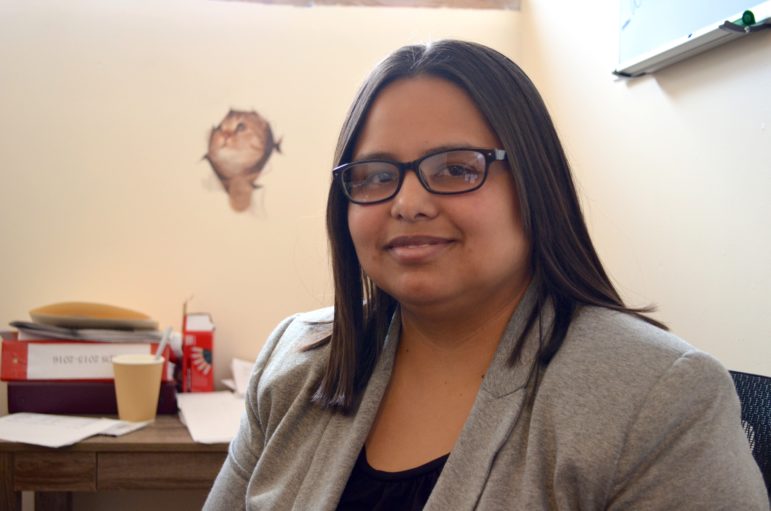 Laura Aguiar moved to New Mexico eight months ago and settled in the outskirts of the state’s capital. She began reaching out to volunteer with a local “Dreamers” organization when she started to feel sick.

There was chest pain. Headaches. Stomach aches. And diarrhea. After several visits to the doctor, she was diagnosed with neuroendocrine cancer, which is manageable if caught early.

A cancer diagnosis is enough to unsettle anyone. But Aguiar is struggling with uncertainty that doesn’t weigh down many other cancer patients.

Aguiar is one of hundreds of thousands of adults across the nation — there are 6,000 in New Mexico — who’ve qualified for the Obama-era Deferred Action for Childhood Arrivals program. President Trump asked Congress to agree on a permanent solution by next Monday or the administration would end it.

The 28-year-old was brought to the United States when she was 2. Aguiar’s family came from Jalisco, Mexico, and settled in Washington state.

On Monday the U.S. Supreme Court gave Dreamers a reprieve that could protect most from deportation for the rest of the year, and perhaps even longer. It rejected the administration’s request to end the program while lawsuits work their way through federal courts. The decision will ease the pressure for Congress to come up with a solution as it also allows recipients to renew their applications.

“This gives me hope that the program has the ability to continue even if the members of Congress cannot reach a deal,” she said Monday. “It has withstood many challenges and today’s decision shows that it can continue to withstand those challenges.”

But the reprieve doesn’t sweep away the long-term uncertainty that shadows Aguiar’s life.

Her cancer offers a life-and-death perspective on why legal status is important.

“Quite frankly, my longevity will depend on DACA or me being able to retain legal status,” Aguiar said. “Because it has spread from my pancreas, which was my original location, to the liver, I am diagnosed as stage 4.”

Aguiar describes witnessing the partisan struggle over DACA. “We’re being politically tossed around,” she said. “Which is disheartening to see, because we might be called illegal immigrants or illegal aliens, but we’re people, too.”

Neuroendocrine cells are similar to nerve and hormone-producing cells. Cancer is formed when these cells abnormally grow into tumors. They are rare tumors, and some are benign, while others can be cancerous.

Patients like Aguiar are expected to live for a couple of years to decades, but what is definite is that the cancer is terminal. “It’s the cancer that Steve Jobs had,” Aguiar shared.

Many people think Jobs had pancreatic cancer, but it was neuroendocrine cancer that spread to his pancreas.

“I take one day at a time you know? If I wake up in a lot of pain, I’ll take my pain killers, sleep for a bit and hope that when I wake up, the pain is manageable so that I can come to work because work is the only way I can qualify for any health insurance,” Aguiar said.

The United States National Library of Medicine states that there is a 77.5 percent chance of patients reaching their fifth year with neuroendocrine cancer. She will have a scan done in March that will reveal if the cancer has spread even further.

The focus of Aguiar’s medical agenda right now is to shrink the tumors and manage the symptoms of constant chest pain, headaches, stomach aches and diarrhea. If the tumors shrink, doctors might be able to remove them, but because the cancer is cellular it will never go away, Aguiar said.

“I have learned that this cancer isn’t curable, but I might still be able to live a longer life,” she said.

The only way she qualifies for health insurance is through her employer, Southwestern College in Santa Fe, where she is a financial aid adviser.

Aguiar pays $46 per month for Sandostatin injections, the drug itself is covered by her insurance. Without that insurance, she would have to pay many thousands of dollars. 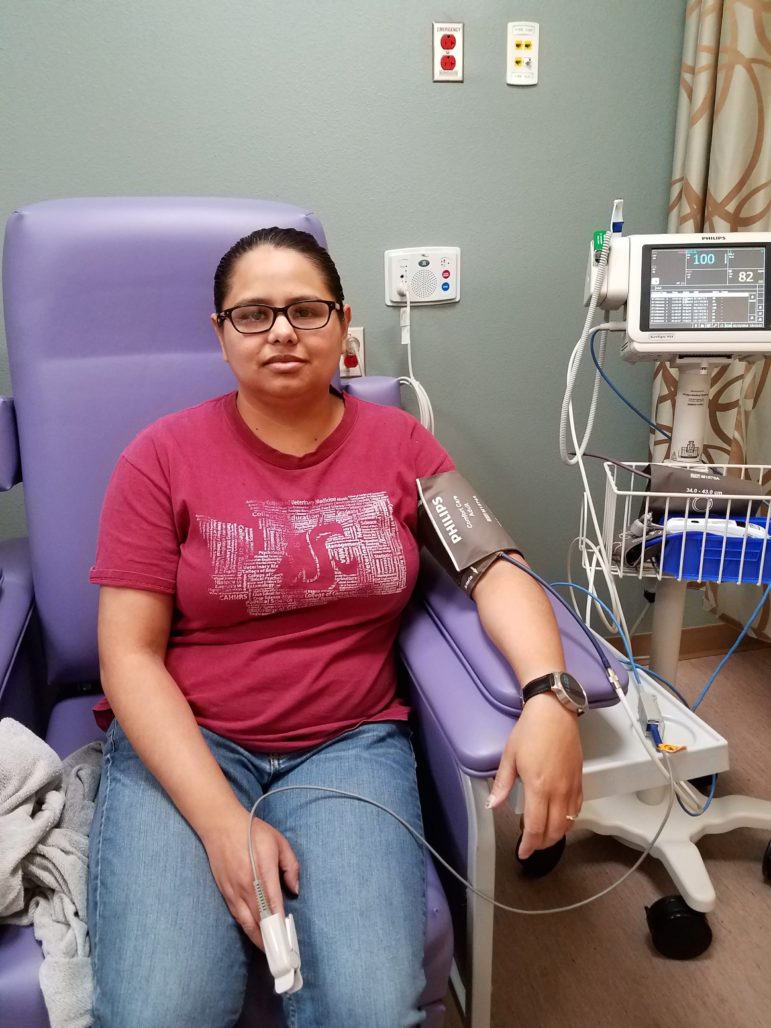 Even with her employer-provided insurance, medical expenses are a stumbling block.

“It’s $350 for a ER visit, $70 for urgent care, $80 to go see a specialist, $40 to see my primary care physician. In the month of January, I had one ER visit, one primary care visit and two specialist visits,” Aguiar said.

Faculty and staff members from her alma mater in Toppenish, Washington, Heritage University, established a GoFundMe page to help with the expenses.

“They all came together after hearing about my diagnosis and called themselves ‘Laura’s Lift Team,’” Aguiar said.

Aguiar has the support of her wife and faculty, but those who are missing are her family members. The last time Aguiar saw her family was around last Christmas.

“I know it has been difficult for them because they wish they could be here for me, but they can’t,” Aguiar said. “So I haven’t seen any of them, not even when I was hospitalized or anything because they are too worried to travel.”

Aguiar describes being diagnosed just as she had moved to New Mexico and was looking at volunteering with local immigrant rights organizations.

Aguiar found herself in New Mexico last year after her wife, Crystal Yañez, who is a U.S. citizen, enrolled at Southwestern College to pursue a master’s degree.

Because Aguiar had worked in financial aid at Heritage, she found a job at Southwestern. 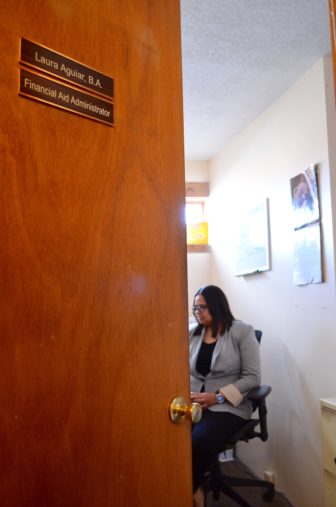 Laura Aguiar in her office at Southwestern College in Santa Fe, where she works as a financial aid administrator.

Aguiar feels called to the work she does.

After graduating from Heritage in 2012, she went back to working in the fields with the rest of her family.

“But one month to the day President Barack Obama announced his DACA program and I was finally able to get a professional job where I could use my college degree,” she said.

Aguiar became a financial aid adviser and provided a safe space for undocumented students in her office back in Washington.

“I really tried my best to be proactive because I understood what they were going through,” Aguiar said.

She encouraged low-income, DACA and undocumented students to aim high and to continue with their studies, but sometimes Aguiar received backlash from their parents and family members.

“A lot of parents of undocumented students have the notion that you shouldn’t encourage them or overly encourage them because they might not be able to succeed and be disappointed,” Aguiar said.

It happened to Aguiar. Her mother got upset with her high school counselor for encouraging Aguiar to attend college.

That same counselor played an important role for Laura, who recalled a poster he had that displayed a quote from American football coach Lou Holtz. It’s quote Aguiar now lives by.

“Life is 10 percent what happens to you and 90 percent how you react to it,” she said. “I guess my message that I would like to leave goes back to that original quote.”

“That is pretty much how I’ve lived my life, because I’ve had some pretty bad situations,” Aguiar said. “I was told once in high school that I shouldn’t try so hard to have good grades because I was going to be a field worker just like my parents. I could’ve taken that to heart, but what I’ve decided to do at that moment is to show that person that no, I could be more.”

With her counselor’s help, Aguiar attended Heritage University with scholarships and the Mellon Mays fellowship, whose goal is to diversify faculty at higher educational institutions. She received her degree in mathematics in 2012. 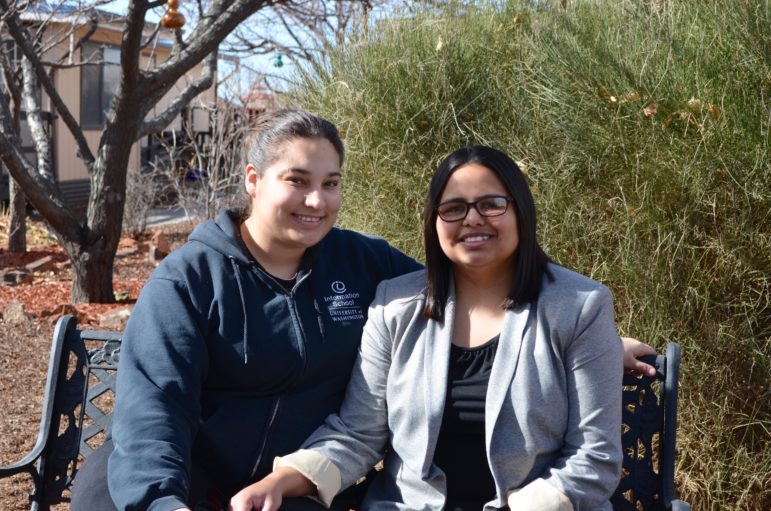 Aguiar hopes to become a financial aid director in the future.

Dru Phoenix, Laura’s boss and Southwestern’s enrollment director, said she and other Southwestern College staff love Laura and are willing to do whatever it takes to support her during this health crisis.

“She has been truly remarkable in what she has offered our school in the short time she has been here,” Phoenix said.

“So we are participating in the GoFundMe page to help raise money for medical expenses. Staff have visited her in the hospital and drove her to medical appointments, she has been able to flex her hours and work from home when she is in a lot of pain. It is important for us to convey to her how much we care about her and her situation.”

The DACA situation made Phoenix aware of the possibility of losing Laura as an employee, the impact on employers and the economy if the program were to end.

Phoenix said she is relieved by Monday’s court order and remains hopeful that Aguiar will be able to pursue her dreams.

See more of New Mexico In Depth’s interview with Aguiar on Youtube.