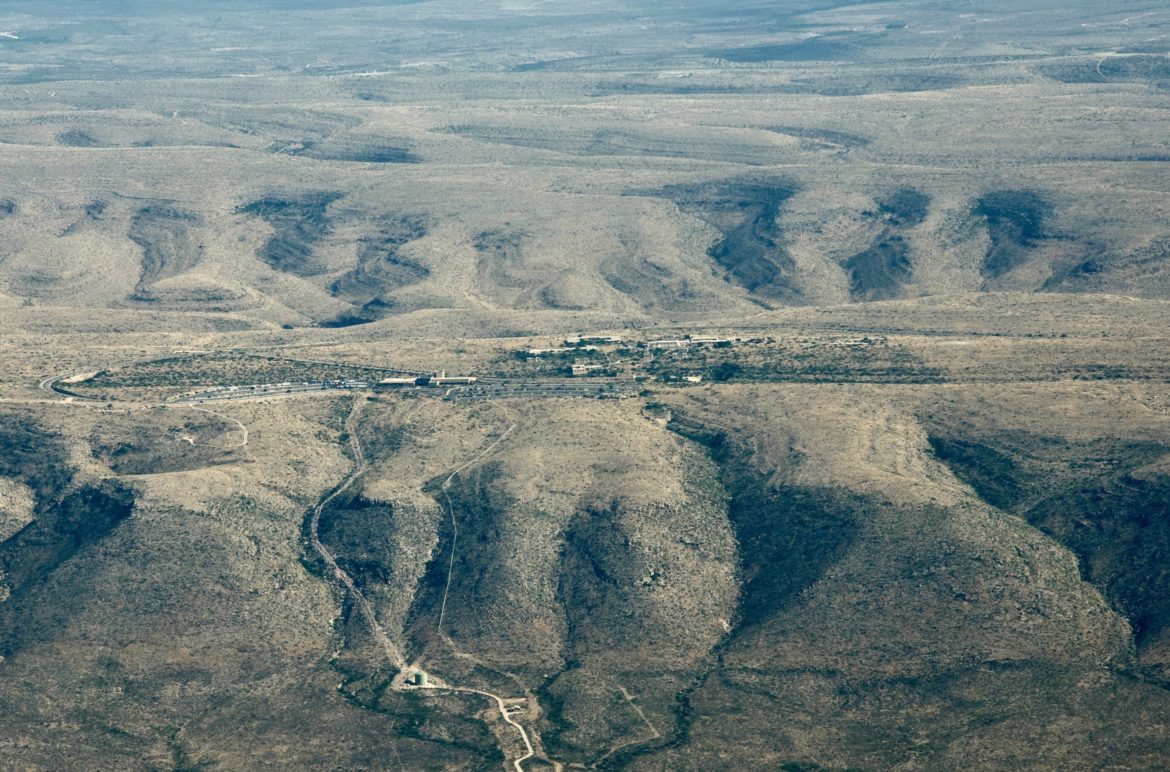 The plane had wheeled back north toward the airport when the Carlsbad Caverns National Park Visitor Center came into view, perched on the tan heaps of a sloping escarpment that offers no clue to the dramatically sculpted caverns beneath.

From the air, however, signs of another underground natural resource were plainly visible: well pads pock the horizon. The park overlooks a stretch of desert atop the Permian Basin, and I’m in a tiny, six-seat plane—including the pilot’s—to get a look at how the push for one resource could affect the other. 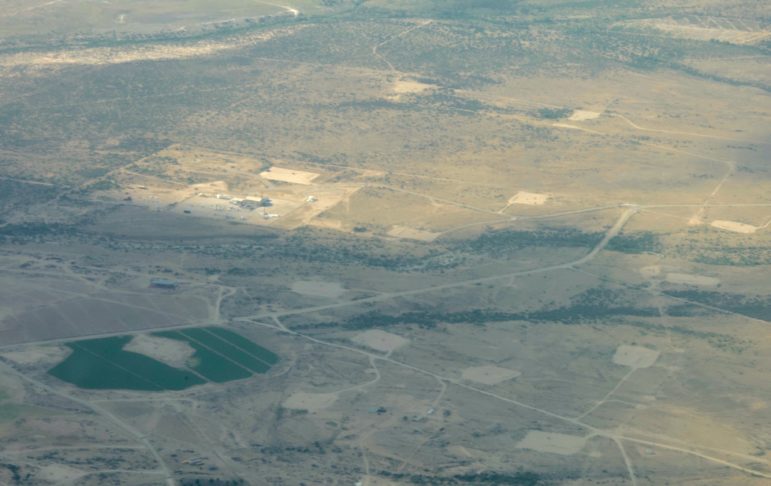 A maze of well pads

The U.S. Bureau of Land Management has proposed to auction mineral leases on 197 parcels in the area in September. Some of those 89,000 acres sit within a mile of the national park boundary, or encroach on Guadalupe Mountains National Park across the Texas state line.

One nominated lease parcel will be within line of sight from the visitors’ center, says Ernie Atencio, New Mexico program manager for the National Parks Conservation Association, as the plane soars over the park, passing the trailhead at Rattlesnake Canyon.

The association teamed up with EcoFlight, an organization that matches donated pilots and planes with journalists and environmentalists interested to view some of these issues from thousands of feet above them. Colorado-based pilot Gary Kraft has volunteered the flight hours and borrowed a plane. 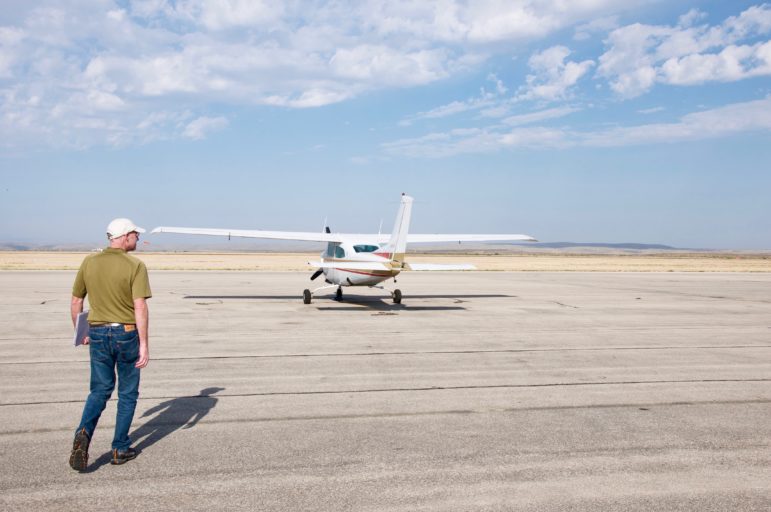 “Energy is already dominant,” Atencio says, pointing to the oil and gas facilities along the highway to the park. “It just makes sense that we protect some of these areas as buffers around national parks.”

As the Department of Interior has prioritized American energy independence, it’s fast-tracking oil and gas development. Carlsbad is one of several parks the National Parks Conservation Association has sounded alarms over as oil and gas leases move closer to park boundaries. 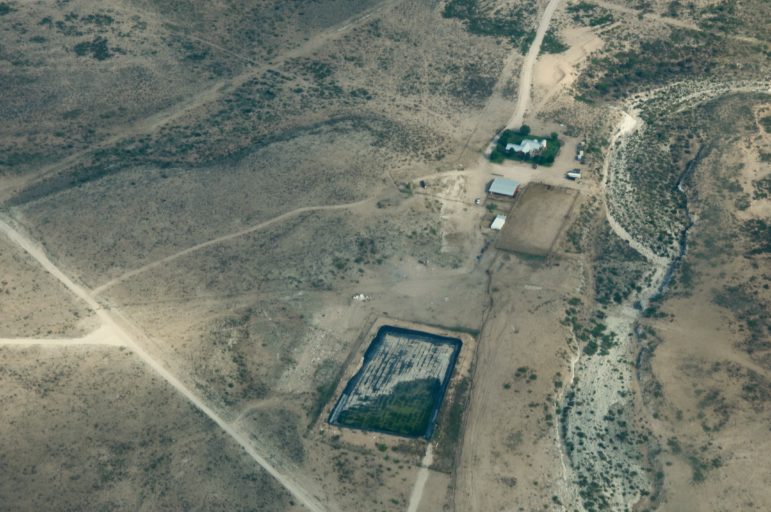 In the city of Carlsbad, the boom in the Permian Basin has practical ramifications, such as trucks and semis clogging the highway through downtown and hotel rooms that run $500 a night. Oil field workers cluster their RVs in “man camps” also visible from the sky.

We’re flying in the morning sun, but I can still spot the flames of flares, likely burning off methane. By night, Atencio says, the lighting and flares make some areas look like an urban landscape.

A couple of years ago, that nighttime landscape was captured by a park ranger, from atop Carlsbad Caverns National Park: 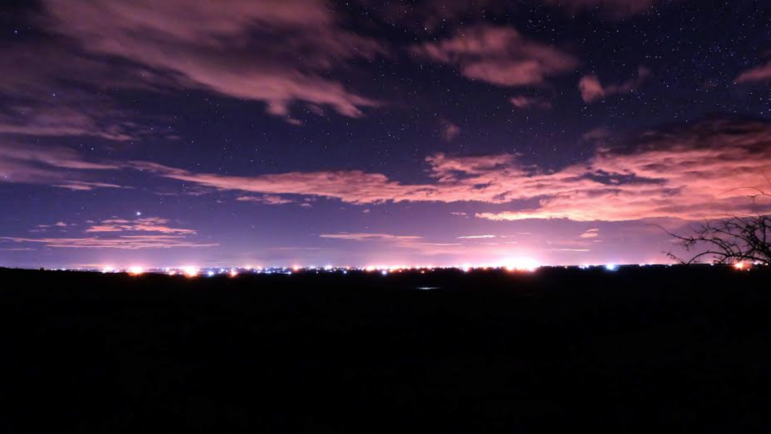 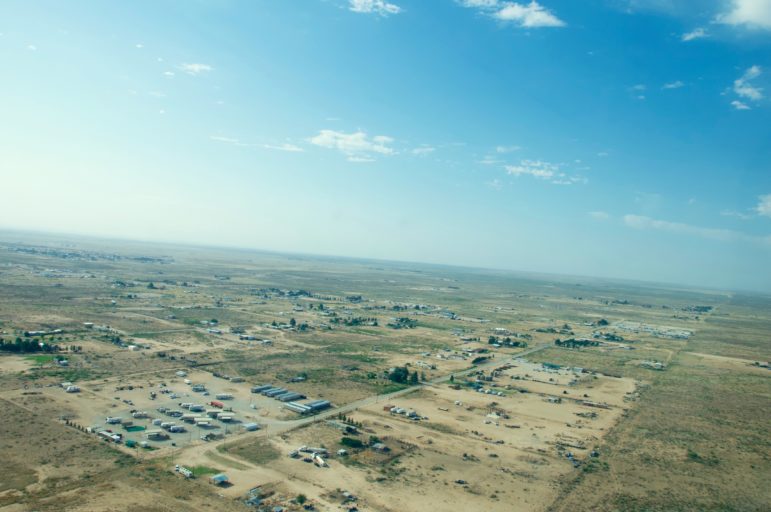 Housing and man-camps near Carlsbad

Chief among Atencio’s concerns is how the public seems to be getting cut out of opportunities to have a say in this development even as it affects their daily lives.

“I think this is the poster child for the new approach to energy dominance that is essentially eliminating almost every opportunity for public participation in the process,” he says of the Carlsbad area. 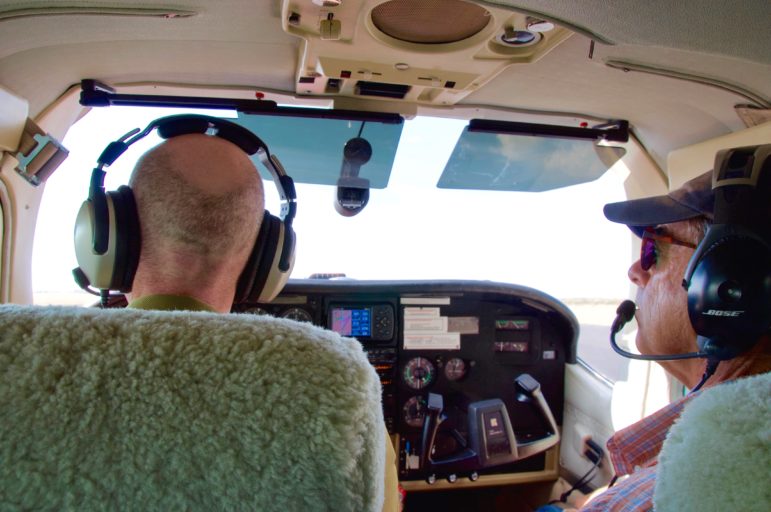 Kraft and Ernie Atencio of the National Parks Conservation Association

Under President Trump, the Department of Interior reduced public comment periods from 30 days to 10 days, and the association barely spotted these parcels in that window.

As we fly over the Guadalupe Escarpment, which holds the Carlsbad Caverns and later turns to the Guadalupe Mountains National Park, James Goodbar, a caves and karst specialist, points out the striations that mark geological joints. At those weak points, hydrogen sulfide—bubbling off oil and gas deposits—seeps upward and mixes with water to make sulfuric acid that melts limestone, forming caves like the iconic caverns. 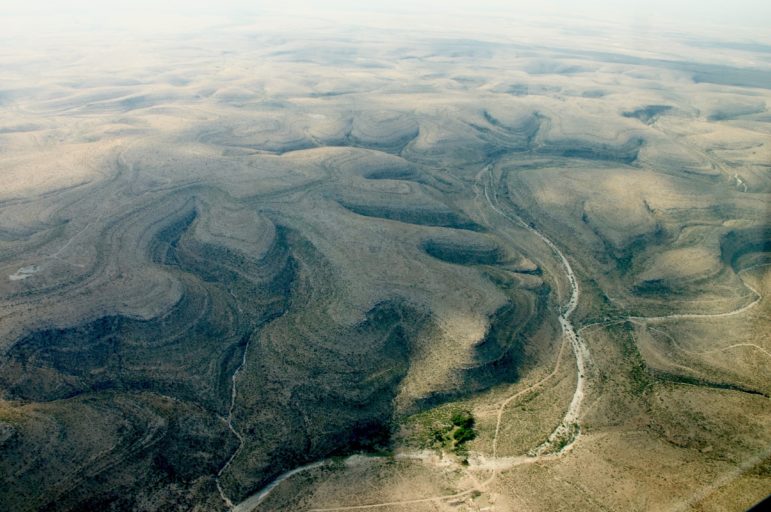 “There could be huge, giant caves underground with absolutely no indication of what lies beneath the surface,” Goodbar says.

He’s recently retired from a 38-year career with the BLM, all of those decades based out of Carlsbad. He first went caving in southeastern New Mexico in 1965, and for years that followed, he’d drive to the area solo when he couldn’t find anyone to drive with, and when he didn’t have any money to drive, he’d hitchhike.

“I was so ‘Wow!’” he says. “I was smitten with the caves in the Guadalupe Mountains.”

From the sky, he points out the threaded riparian areas, the dry bed of the Black River, and the dark pockets of sinkholes that leak water to form more stalactites and stalagmites, and names the canyons. 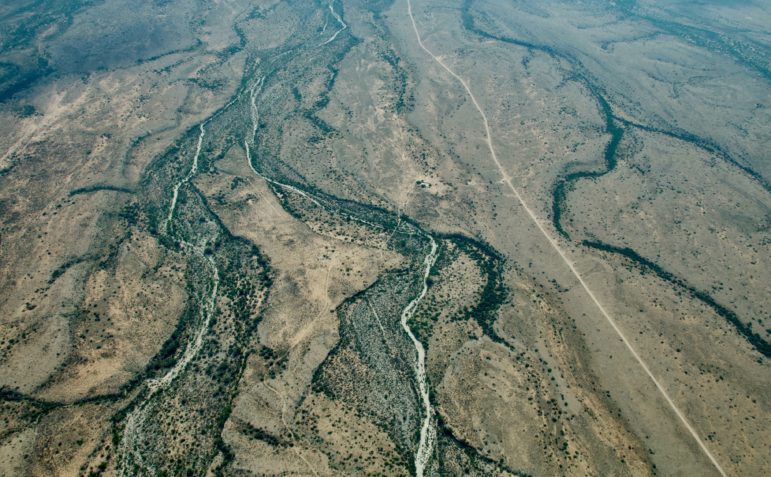 Goodbar also points to the blocks of well pads with their clusters of tanks, the waste pits, and the nearby entrance to the national park. Just before the plane makes a couple of belly-flipping adjustments and heads back toward the runway, Goodbar points out a well pad that has been “ripped and reseeded.” Restoration work tore up the hard-pack ground and re-seeded it with plants.

The well head has disappeared and the surrounding square of hard-packed soil slowly fading below neat rows of new plants. That replanting can occur throughout the course of a well’s life, if it’s just producing and active drilling is no longer underway, so he asked one drilling company employee when they’d do this kind of reclamation. He was told active drilling is expected to continue for 80 to 100 years as they access the 27 different layers of the formation. Reclamation to erase this patchwork so clearly seen from above is more than a lifetime away.

One thought on “Flyover Country: Aerial tour of Carlsbad highlights oil and gas moving in on national park”