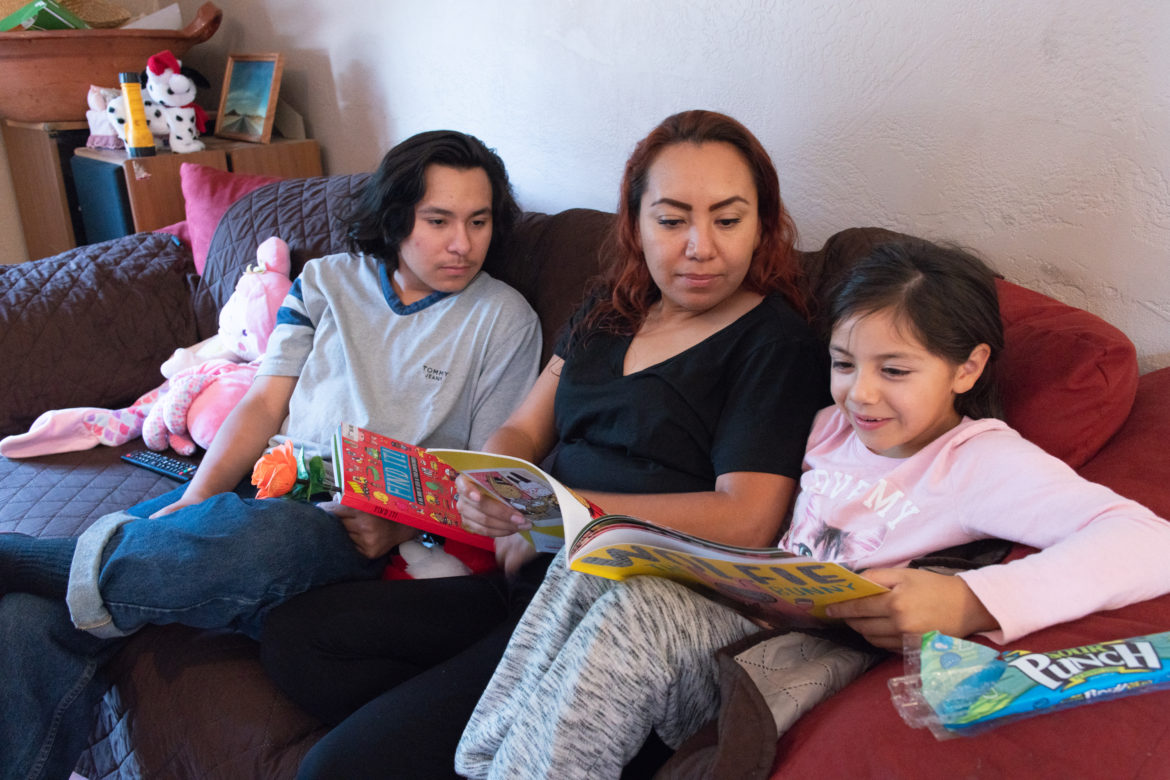 LAS CRUCES — The morning after Donald Trump was elected president of the United States, 6-year-old Anabell woke up with a pressing question for her mother: “Does that mean we’re leaving the country?’”

“No,” Nayeli Saenz reassured her daughter. “You were born here. You are a U.S. citizen.”

But Saenz, 34, is not. She was brought illegally from Mexico as a 9-year-old girl and has lived most of her life in the shadows. Las Cruces is where she graduated high school, got married and divorced, and raised three children. She’s done so under a cloud of fear and anxiety that began with the Obama administration and has grown increasingly oppressive under Trump.

“It’s a fear that you have that’s unexplainable,” she says, trying to convey the effect on her family. “You have to be careful who knows. As a mother, that fear, you translate it to your children.”

While the nation has been riveted by images of children torn from their parents at the border, families elsewhere throughout New Mexico have been wrestling with a quieter but no less dramatic threat: a steep increase in deportations of immigrants with no criminal record, people who have built lives in this state, working, paying taxes and raising children.

Deportations haven’t hit the high point reached during the early years of Barack Obama’s presidency, but one difference stands out in the first year of Trump: ICE arrests of unauthorized immigrants with no criminal record surged 58 percent in New Mexico and West Texas in one year, to 621 arrests in fiscal 2017 from 392, according to agency statistics. Nationwide, U.S. Immigration and Customs Enforcement (ICE) arrests of non-criminals swelled 146 percent, to 37,734 from 15,353 over the same period. 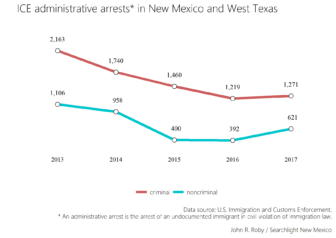 This hardline approach takes a special toll on children, who feel the effects of deportation or the threat of deportation most deeply, research shows.

“One of the worst things you can do to a child is separate them from a parent,” says Brian Etheridge, a Silver City pediatrician and president of the New Mexico Pediatric Society. “Even the threat of a potential deportation has a huge impact on the child’s health.”

Thousands of children in New Mexico may be affected. The Pew Research Center estimates 85,000 unauthorized immigrants live in the state, a figure extrapolated from Census data. Nationwide, in 2014, about 6 percent of U.S. citizen children, or 4.7 million kids, were living with an unauthorized immigrant parent, according to Pew.

Attorneys say the enforcement changes of the past 18 months dictate that almost no circumstance — no matter how heart-wrenching — will prevent the federal government from deporting someone who is in the country unlawfully.

Even immigrants with a pending visa application aren’t as protected as they were a year and a half ago. Saenz, for instance, is hanging her hopes on a visa granted to victims of domestic abuse, after she suffered for years with a physically violent US. citizen husband. Lawyers say that is no longer a guarantee.

“The law hasn’t really changed all that much, but the enforcement of that law has changed quite a bit,” says Olsi Vrapi, who heads an Albuquerque immigration law firm with 10 attorneys across New Mexico and West Texas. They currently represent more than 1,000 cases. “There is absolutely no heart in immigration enforcement anymore.”

In an emailed statement, ICE spokeswoman Leticia Zamarripa told Searchlight New Mexico that “decisions whether to detain a parent who is caring for minor children are made on a case-by-case basis.”

She added: “For parents who are ordered removed, it is their decision whether to relocate their children with them. If parents choose to have their U.S. citizen children accompany them, ICE accommodates, to the extent practicable, the parents’ efforts to make provisions for their children.” 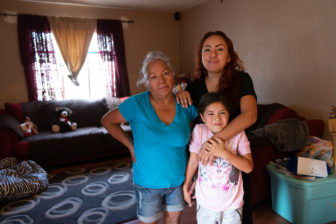 New Mexico is the only home many of these children have known, and the same is true for many of their parents. Saenz hasn’t been back to the village of her birth in Hidalgo state, north of Mexico City, since she came here in the early 1990s. She reminisces about the avocado trees and the ruins of her native culture and wants her kids to know their roots but, for now, she can’t go back.

When she crossed the Rio Grande on a raft with her mother, it was below an El Paso international bridge in plain sight of border agents who tolerated the practice. She and her parents have since spent decades in one immigration process or another, applying for legal status.

In a modest house with wildflowers out front and shades drawn against the southern New Mexico heat, Saenz explains how U.S. immigration policy has affected her children: How her sons cried for years when she dropped them off at school, fearful she might not be there in the afternoon; how her youngest, Anabell, is struggling to understand the limits her mother faces without full legal residency.

“I try to make them as comfortable with their situation as possible without them losing the view of our reality,” Saenz says, brushing tears away. “It’s a hard balance. It’s like they have these wings, but they can’t fully expand them and fly. There is always something they hold back.”

A lifetime of trauma

A growing body of research shows the serious psychological effects children face amid the daily threat of deportation, especially of a parent.

A 2010 study by the Urban Institute examined the consequences of parental arrest, detention and deportation on 190 children in 85 families across six states and found that parent-child separation poses serious risks to children’s immediate safety, economic security, well-being and long-term development.

Within six months of an immigration raid or other arrest, about two-thirds of children experienced changes in eating and sleeping habits. More than half of the children cried frequently and expressed fear, while more than a third were anxious, withdrawn, clingy, angry or aggressive. 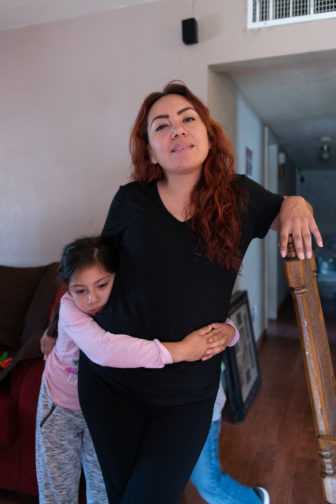 Although public schools are legally prohibited from inquiring into immigration status, Cesar Chavez Elementary School in Santa Fe – like others around the state – has found itself in the position of trying to pick up the pieces of  families torn apart by tougher immigration enforcement.

“One family’s youngest child stopped eating,” says Hilda Perez-Vargas, a coordinator at Communities In Schools, a Santa Fe nonprofit that connects students with outside resources. She is assigned to Cesar Chavez Elementary, where she has worked with numerous families. “We couldn’t get him to speak. The only time he would eat was when they were Skyping with their dad. Financially they are struggling. The middle one is trying to be the savior. The older one is trying to be the man of the house. The little one is fading away.

“There is a sense of abandonment,” she continues. “The older ones understand it better. The younger ones, you throw all the terms at it, but they only see that their dad is gone.”

Student absences surge with every raid or arrest. The day after an ICE operation in Las Cruces in February 2017, some 2,100 of the district’s 25,000 students stayed home. Teachers report behavior changes and falling grades. Counselors recount tales of students crying, acting out in class or withdrawing.

Pediatricians say a parent’s deportation is now understood to be an Adverse Childhood Experience, or ACE, a measure of trauma that can have lifelong health impacts.

Etheridge says he has watched in despair as patients have fallen off the rolls or forgone care. He recalls a Silver City mother who was afraid to take her son to a pediatric dentist in Deming, fearful of traveling highways policed by the Border Patrol. He recalls a mother whose child needed acute kidney care; she couldn’t pass the Border Patrol checkpoint on the road to Albuquerque.

The Robert Wood Johnson Foundation this year funded research by two undocumented students at the University of New Mexico. The study by Josue De Luna Navarro and Yazmin Irazoqui Ruiz explores the mental health of mixed-status and undocumented New Mexico families and is expected to be published in the next few months.

The researchers say their motivations were both scientific and personal: Both were brought from Mexico as children and are protected temporarily under the Deferred Action for Childhood Arrivals program, or DACA. “We know what our community faces, because we face it ourselves,” Irazoqui Ruiz says.

Last fall, they held focus groups for 18- to 35-year-olds in Albuquerque, Santa Fe and Taos. The stories they heard were painfully repetitive: the trauma of migration, Trump’s election, health concerns when medical care for the uninsured is scarce or too expensive.

“Even when someone’s health is at risk, it’s always immigration status that you think of first,” says De Luna Navarro. “Always.”

Saenz, for her part, taught her children the rules of the shadows from the time they were toddlers: to recognize law enforcement, to never mention her origins, and, if questioned, to plead the 5th. All three of them know the drill — the “emergency plans” for who takes charge if ICE comes calling. Saenz gave her U.S. citizen sister, at 18, power of attorney over her kids.

In the meantime, she keeps her family’s fears at bay by fighting back. 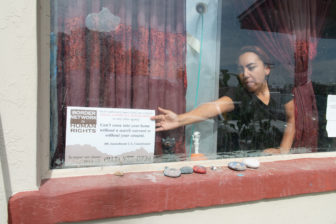 Eight years ago, Saenz joined the Border Network for Human Rights, a grassroots advocacy group whose 7,000 members can quote from the 1st, 4th, 5th, 6th and 14th constitutional amendments. Organizing committees routinely crowd her living room to share the latest news of court cases or immigration raids. She keeps a sign in her window reminding law enforcement that a warrant is required to enter her home.

Fifteen-year-old Steven — her oldest — has been tagging along to protests since he was a baby. Now in 10th grade, he is growing increasingly political and says he wants to run for political office someday. He says he wants to spread the message that undocumented immigrants aren’t strangers; they are friends and neighbors who are worth fighting for.

Few people know that he has grown up with the threat that his mother could be taken from him at any time.

“I don’t think lots of people understand what it’s like,” he says, “fearing what will happen to your loved one when they go out, not knowing if they will come back.”

Reporter Lauren Villagran can be reached at lauren@searchlightnm.com.

One thought on “For NM’s undocumented, a cloud of fear”