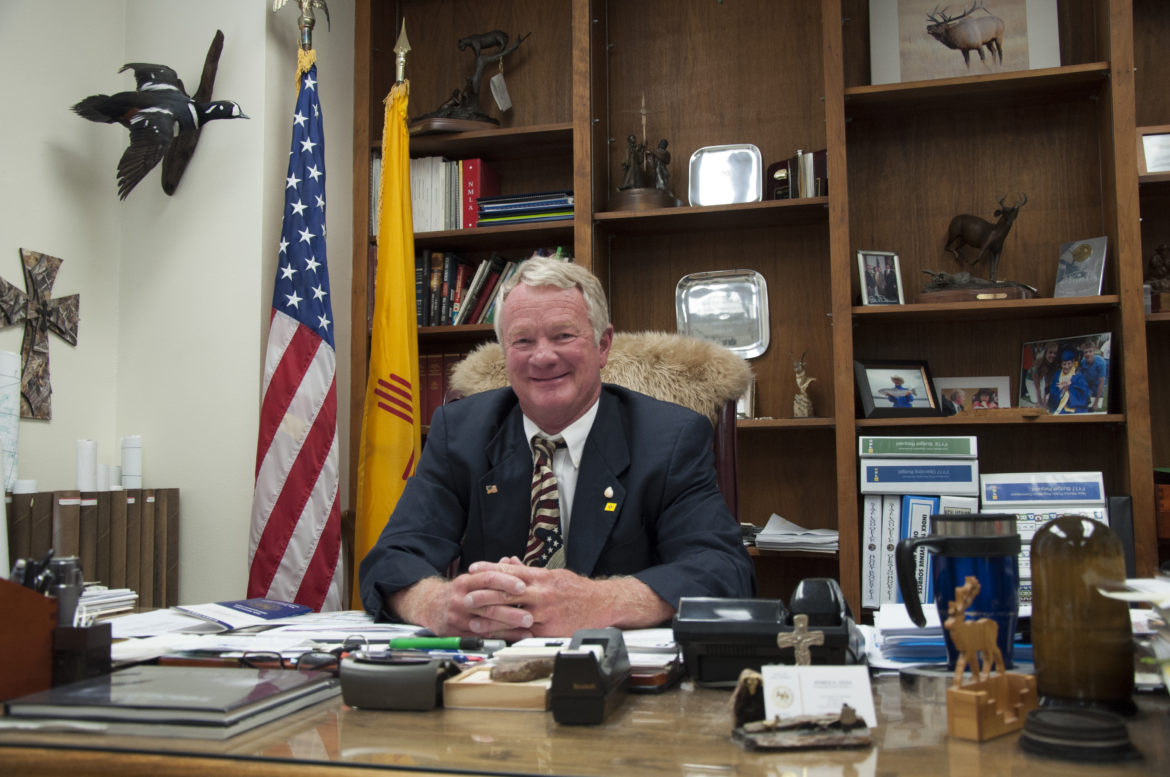 A campaign fundraising letter that public land commissioner candidate Patrick Lyons sent ranchers who lease land from the State Land Office is raising legal and ethical questions a month before voters decide whether to return him to the job he held for eight years.

Should Lyons win the seat this November, he will be in charge of renegotiating leases with companies seeking to renew those agreements. About 30 percent of the money Lyons has raised so far in his run has come from lessees, according to a review of campaign finance records.

A copy of the letter was shared with New Mexico In Depth and is addressed “dear agricultural lessee.” It goes on to describe Lyons’ record as a rancher and farmer, and as previous land commissioner.

It then states, “I am running for Commissioner of Public Lands in 2018 and need your help to get elected so that the agricultural lessees have a voice at the State Land Office.” The letter asks the reader to consider donating $100 to $1,000 before concluding, “Let’s make sure agriculture has a voice in the Land Office.”

Lyons used a list from his previous time in office to reach out to ranchers, and didn’t duplicate the effort for the oil and gas industry.

“I’ve been in agriculture all my life, for three generations. Yeah, we know lots of farmers and ranchers around the state — that’s my base. Of course you’re going to get a hold of them,” he says. Of 3,700 letters sent out, he says he got about a 1 percent return. “So it didn’t work at all. It barely paid for itself.” 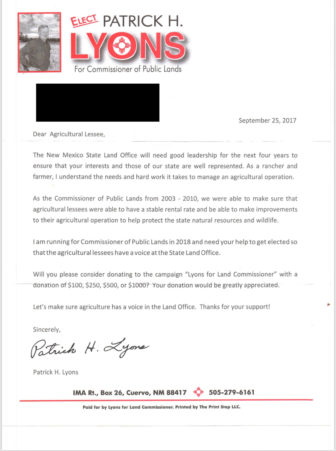 State law is fuzzy about whether or not such solicitations for contributions violate campaign finance laws. Secretary of State’s staff pointed to the Election Code, which prohibits candidates from knowingly soliciting funds from industries they would be regulating, but the statute doesn’t clearly include lessees in the definition of a regulated entity. No one has filed a complaint, so the office has had no cause to review the situation.

The State Land Office reviews competitive bids for five-year leases and establishes fees for livestock grazing and cropland based on current grazing rates, beef cattle prices and livestock production costs. A formula implemented in 1988 is used as a guide, and the Land Office’s Agricultural Leasing Bureau staff and district resource managers are also available to advise the commissioner and assist lessees in completing applications. The office is also in charge of the renewal process for current lessees.

“The grazing formula is set already,” Lyons says. “We can’t mess with that anyway.”

He also encouraged a close look at contributions to his Democratic opponent Stephanie Garcia Richard: “She’s got $5,500 from the NEA — everybody wants to be influenced.” Four of the five top donors to the former public school teacher’s campaign are affiliated with education.

Ethical government advocates point to a gray area in the wording of Lyons’ campaign letter, which was sent in late 2017.

“I didn’t see anything that specifically said, ‘You do this for me, and I’ll do this for you,’” says Kathleen Sabo, with New Mexico Ethics Watch. “But I do think there’s a litmus test and that test is, if you’re a public official, and you or someone else asks, ‘Hey is this crossing an ethical line?’ then it’s something to take a look at.”

She points to Santa Fe County sheriff candidate Manuel Anaya, who announced he would return $1,300 in donations to his campaign from people he’d investigated in his work at the state Public Regulation Commission transportation division after questions were raised about those donations.

“The very fact that [Lyons has] targeted lessees and reminded them of his record — which he’s entitled to do — how does that look? We all have to be the judge,” Sabo says. “The voters will judge whether that met their ethical standards or didn’t.”

Lyons, a current public regulation commissioner, would be returning to an office he held from 2003 to 2010. He’s been known to return campaign contributions before to avoid the appearance of conflict of interest.

At the end of his last term as land commissioner, Attorney General Hector Balderas, who was then the state auditor, released an audit that accused the office of losing millions of dollars for the state land trust and the New Mexico Supreme Court issued a stay on land-swaps Lyons orchestrated that involved two private ranchers securing state trust lands as the sole bidders in separate auctions. At least one of those companies, UU Bar Ranch, maintains an active grazing lease on state trust lands. Lyons insists he never lost money on a deal and did everything above board.

In 2003, Lyons returned a $1,000 campaign contribution from Brad Kelley, owner of UU Bar Ranch, when talks started around a land swap. Lyons said then he wanted to avoid any appearance of conflict of interest.

In 2006, Lyons also faced questions about intervening in a lawsuit involving a landowner, Mike Machenbier of the Four Daughters Ranch, and the Isleta Pueblo. Machenbier had donated to his campaign before, during and after his lawsuit. Lyons argued that the state needed to intervene in the lawsuit, which concerned an access road, to preserve the state’s access to its own lands. Machenbier still has active grazing leases with the State Land Office, and donated $2,000 to Lyons’ campaign this year.

“I don’t recall 12 years back,” Lyons said when asked for details. “But if it happens again, we’ll do it again. We’ve got to make sure we’re not unduly influenced — and we’re not.”

Prior to joining the Legislature, former state Sen. Dede Feldman worked as press secretary for a Democratic land commissioner candidate in 1986. She recalls checking campaign contributions to his opponent and found ranchers and oil and gas dominated the list.

“It’s not new. This goes on,” she says. “That’s what the land office is considered to be — sort of a resting ground for all the concerns of ranchers, oil and gas guys, and just as the [Public Regulation Commission] is the locus for all the policies having to do with telecommunications and public utilities.”

But the PRC has specific rules banning contributions from regulated entities, while land commissioner elections don’t have that specificity.

“There’s no statutory regulation on it,” Lyons says of the letters sent. “These people want to make sure they keep their way of making a living alive.”

But others think the practice of land commissioner candidates soliciting lessees warrants a closer look.

“It’s something that I think we are going to have to explore legislation on again in the future, just because the appearance of that conflict of interest is something that continues to drive the voters’ perception of our political system and should be addressed,” Executive Director of Common Cause Heather Ferguson said.

“Regardless of whether or not there is any quid pro quo, there’s just a perception issue that there’s a conflict of interest there.”

Correction: This article has been updated to note that the Supreme Court issued a stay of the White Peak land exchanges, rather than overruled them. Also corrected is that Sen. Dede Feldman worked on a land commissioner race in 1986.