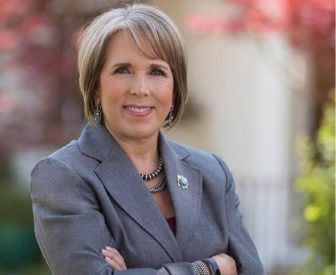 One of the stories that’s emerged during the 2018 election is a surge of online small donors crossing state lines to power insurgent Democratic candidates who the party hopes will lead to a takeover of the U.S. House of Representatives. One of those campaigns is in southern New Mexico’s 2nd congressional district. Democratic candidate Xochitl Torres Small has built a war chest that includes significant small donor support in a race against Republican Yvette Herrell that the Cook Political Report has rated a “toss-up.”

But Torres Small and other Democratic congressional candidates aren’t the only ones benefiting. New Mexico gubernatorial candidate Michelle Lujan Grisham’s small donor contributions reported with a month left in the campaign have notably outpaced not just her rival, Republican Steve Pearce,  but also candidates in the last two gubernatorial campaigns. And a much larger share of her small donations, those that are $200 or less, come from outside New Mexico.

Lujan Grisham’s ability to rake in so many small donors from other states may say less about her positions and more about her ability to tap a national network of Democratic small donors giving small amounts, often multiple times.

Sheila Krumholz, executive director of the Center for Responsive Politics, said energized Democratic small donors are one of the themes of this election cycle. 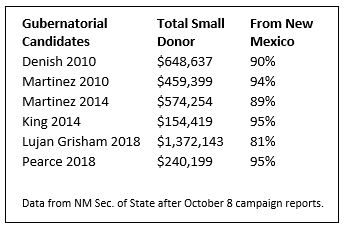 Small donors are contributing 40 percent or more of campaign accounts in some cases to candidates for the House and Senate, with the highest going to women, Krumholz said. While she said she hadn’t looked at gubernatorial races, it makes sense that races at all levels would feel the effects of democratic grassroots fervor.

“Anything to do with politics is benefiting from the intensity of this cycle, arguably more on the Democratic side, and small donors are a demonstrable piece of that,” said Krumholz.

Small donor contributions given in total to New Mexico candidates this year are on track to outpace amounts given in elections going back to 2010, most likely due to Lujan Grisham’s fundraising strength. In gubernatorial election years, there are more small donations fueling state races. That’s most likely because in presidential years some of the small donor interest is diverted to their presidential candidate of choice. 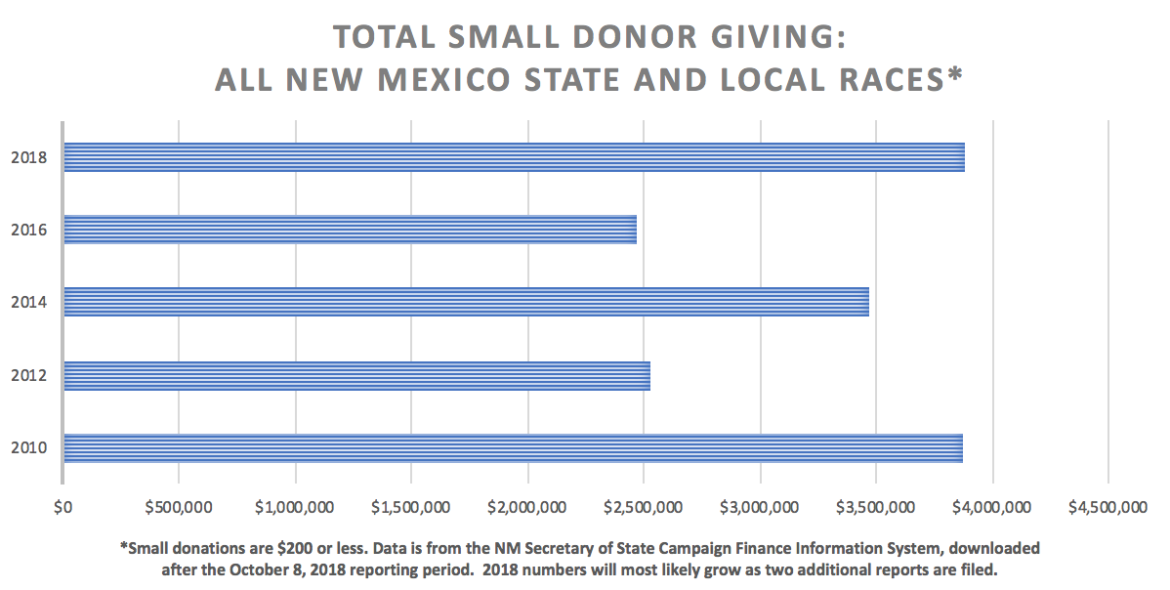 An online digital fundraising site called Act Blue allows people to make their own online accounts and easily donate to candidates, with an option to make monthly donations for as small as one dollar. Most Democratic candidates use the site in their fundraising appeals.

“It’s an age where if someone has the right characteristics, and with Act Blue, it makes it so much easier,” said Krumholz. “It’s similar to impulse buying.” 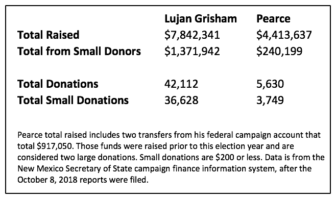 And while Lujan Grisham has significantly out-raised Pearce, not just with small donors, she had less money on hand than Pearce for the crucial final stretch, according to campaign finance reports filed in early October, when candidates need cash to counter negative advertising  Pearce had $1.2 million to Lujan Grisham’s $780,000.

Small donors tend to be more ideological than larger donors, said Krumholz, which is valuable because their enthusiasm also translates to voting and getting their families and friends to vote.

“They’re valuable because they add up, they can amass a lot of money and they are likely to represent a lot of people who vote,” said Krumholz. “Not only are they valuable because they give candidates voters and money, but they also get enthusiastic about getting their friends and families to vote. So it’s that building of the base.”