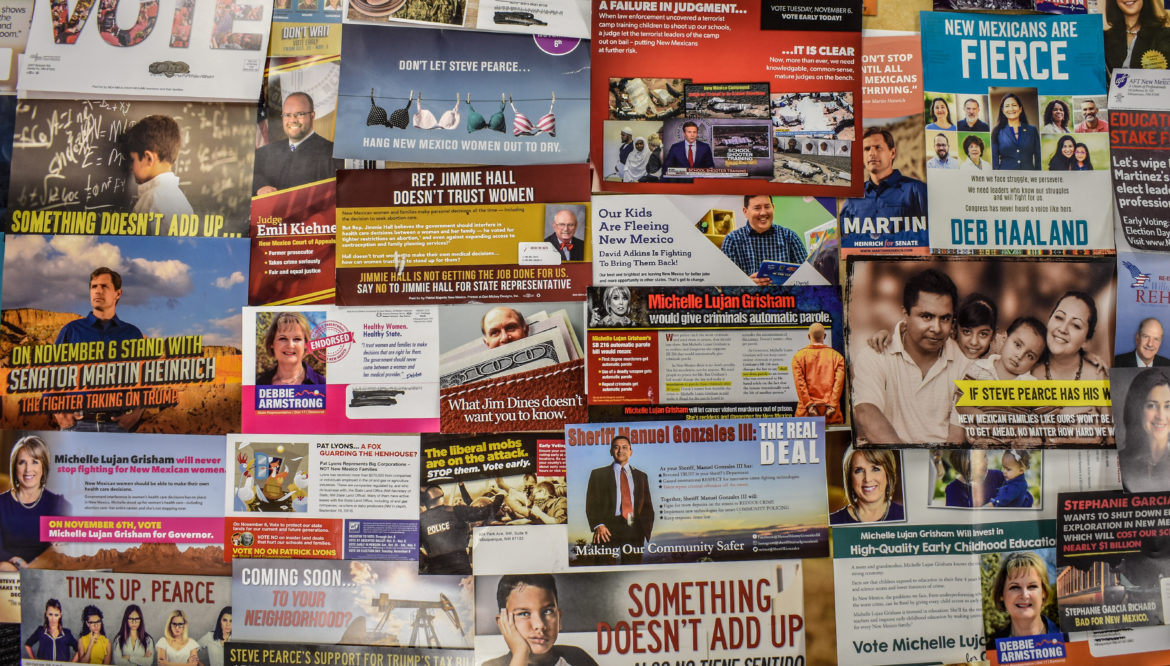 A selection of political mailers sent to homes during the 2018 election in New Mexico.

This article was published by both New Mexico In Depth and the Daily Lobo at the University of New Mexico. Anthony Jackson is a Fellow for NM in Depth and a beat reporter for the Daily Lobo. He can be contacted on Twitter: @TonyAnjackson

Dark money is untraceable contributions that can come from unions, corporations, nonprofits or any group registered with the Internal Revenue Service as 501(c)(4) and also 501(c)(6) to make it more complex.

Donations from these groups can go directly to candidates or to political groups. Nonprofits and other entities do not have to disclose their donors, while political action committee (PAC) donors are part of public record.

PACs have spending limits in elections. In New Mexico, PACs can directly donate $5,500 to a state candidate, national candidate or other PACs.

On the other hand, super-PACs can spend unlimited amounts of money to influence an election as long as they do not coordinate with a campaign.

Money from super-PACs is seen most often in negative political advertisements.

Following the money tells voters what special interests may be vested in the election of a particular candidate.

A prime example of political advertising was a mailer dropped off at Zimmerman Library last week, urging voters against Republican Patrick Lyons for state land commissioner. In red and black all-caps, the ad reads: “Our state lands should not be sold to the lowest bidder with the best connections,” citing articles from the Santa Fe New Mexican and New Mexico in Depth. The other side of the flier posits whether Lyons is “a fox guarding the hen house?”

The ad was distributed as a mailer and a website called Lyon of Big Oil, by a group called the New Mexico Working Families Party (NMWFP). Eric Griego, the group’s executive director, said the target group was people ages 18 through 24.

“We’re trying to mount a counter campaign to make sure that this big, out-of-state multinational corporation doesn’t essentially buy the race,” Griego said.

Winning an election requires a lot of money, particularly at the state and federal level. In the interest of preventing the appearance of corruption in the electoral process, the U.S. Supreme Court sets limits on the amount of money that can be donated to candidates to run their campaigns or given to political committees that work with candidates.

For  independent spenders there are no limits. Super-PACS can receive unlimited amounts from individuals, corporations, unions, and other groups so long as they don’t coordinate their activities with the candidates running for office.

Super-PACs are relatively new to the world of politics, according to Heather Ferguson, the director for Common Cause New Mexico, a nonpartisan, grassroots organization whose aim is promoting transparency and fairness in government. Ferguson said the number of super-PACs exploded after the landmark 2010 Supreme Court case Citizens United v. Federal Election Commission, which protected political spending as free speech.

“Citizens United focused on pulling off the contribution limits to PACs and enabling corporations to have and play a much larger role in elections and the money they can give,” Ferguson said.

Ferguson said the precedent for super-PACs was a 1970s era Supreme Court case —  Buckley V. Valeo — that ruled restrictions by the FEC on campaign expenditures were unconstitutional.

“(Buckley) is the first Supreme Court case that deemed money as a form of speech,” Ferguson said.

In 2010, a Gallup poll found 57 percent of Americans believe giving money to a candidate is a form of free speech.

While super-PACs can now engage in unlimited raising and spending of money, requirements that they publicly disclose where their money comes from have been held up by the courts.

At both the state and federal level there are laws requiring disclosure to varying degrees about the source of political funds.

Dark money makes it difficult, if not impossible in some cases, to trace to its origin.

For instance, NMWFP has numerous individual contributors residing in New Mexico, but the bulk of its PAC’s general election funding comes from a Washington, D.C.-based super-PAC called Patriot Majority New Mexico. According to PAC reports on the New Mexico Secretary of State’s website, NMWFP received half the funds it brought in, almost $64,000, from the super-PAC during this election cycle.

Knowing who funded ads requires researching contributing PACs, which in turn could be funded by other PACs or nonprofit groups.

Certain categories of nonprofit groups registered with the Internal Revenue Service are allowed to engage in political activity so long as it is not their primary purpose. These groups can conduct political advertising without having to report any of it to the FEC. In New Mexico, the secretary of state issued a rule last year that requires such nonprofits to disclose their political expenditures at the state level —  even though they don’t have to register as PACs.

Griego, of NMWFP, said as a private voter he would be concerned about outside money in elections, but as a PAC, accepting outside money is necessary.

“If tomorrow, Citizens United were to be overturned and you couldn’t do this type of spending — that would be wonderful because we wouldn’t have to do it, but more importantly we wouldn’t be outspent by Chevron 20-1,” Griego said.

According to data collected from OpenSecrets, the 2016 election saw more than $120 million from undisclosed groups.  Social welfare, 501(c)(4), organizations spent the most — roughly $88 million.

Lonna Atkeson, a professor of political science at UNM and director at the Center for the Study of Voting, Elections and Democracy, said the proliferation of money may make candidates more responsive to donors rather than their voters.

“It’s challenging for voters in most contexts — they hear ads, see commercials or stuff that comes in the mail — it’s really hard to keep track of groups and what they are saying, Atkeson said.

“Drawing that line where you cross the stage of untruthfulness, you need to have institutions and norms around this,” Atkeson said.

In collaboration with Zimmerman Library, New Mexico In Depth is collecting mailers showing up on campus. See all of the advertising compiled so far in an online database, thanks in part to donations by UNM students and staff.