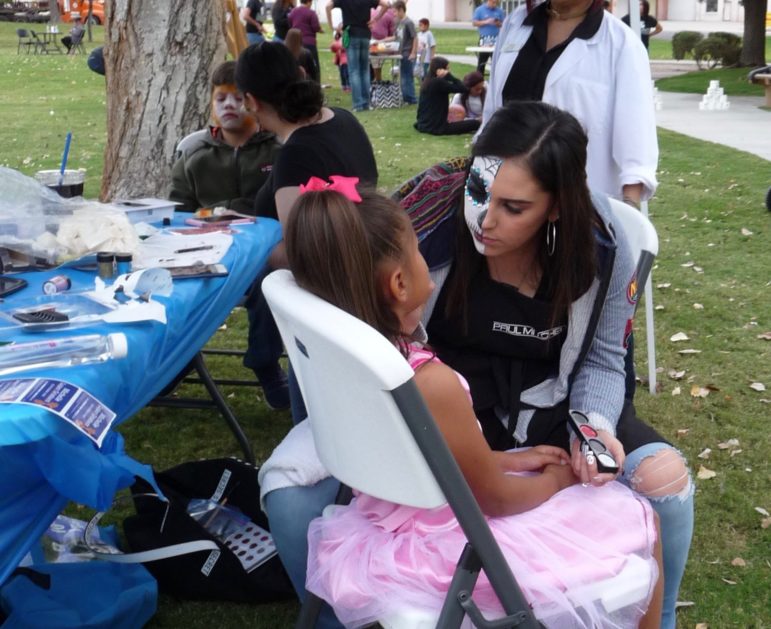 Children get their faces painted at a Halloween-themed get out the vote rally Oct. 30 in Las Cruces hosted by teachers union National Education Association — Las Cruces.

The TV and social media ads have all been placed. Mailboxes have no more room for political mailers. In these final days of Election 2018, everything now hinges on how many people vote in the race for the 2nd Congressional District of southern New Mexico — one of the most expensive in the state and which is garnering national attention and money because of its potential to shift power in the U.S. House.

Who will win this decisive battle in a race rated a toss-up between Democrat Xochitl Torres Small or Republican Yvette Herrell?

The answer likely lies with turn out. Specifically, how well will voters turn out in Doña Ana County — a rich deposit of Democratic voters, but traditionally low voter participation — vs. the rest of the conservative-leaning district. 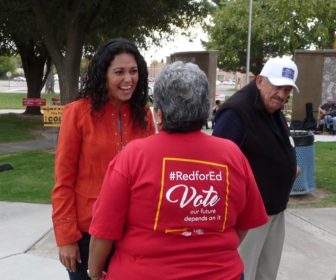 Democratic candidate for Congress Xochitl Torres Small speaks with a potential voter at a get out the vote rally Oct. 30 held by the National Education Association-Las Cruces.

“For Xochitl Torres Small to win, Las Cruces will have to flex its muscle for the first time, come out with large turnout, and large margins for the Democrats. Can they do it?,” pollster Brian Sanderhoff told New Mexico In Depth in late October.

In the final days leading up to the election the Torres Small and Herrell campaigns, and their allies, have been hosting events across the district as part of their get-out-the-vote operations.

On Tuesday, costumed children — and more importantly — their parents turned out for a  Halloween-themed get-out-the-vote rally at Albert Johnson Park put on by the the local teachers’ union, which is backing Torres Small. There was trick or treating, games and face-painting for the kids. And for the parents, an opportunity to vote just across the parking lot at the early voting station in the public library. Torres Small spoke at the event, as did a traveling caravan of statewide Democratic candidates, including U.S. Sen. Martin Heinrich, Howie Morales (lieutenant governor), Brian Colon (state auditor) and Stephanie Garcia Richard (state land commissioner).

“Our hearts are in this,” said Cheryl Carreon, a 29-year special education teacher. “I’m fighting for my daughter and all the students that I serve.”

The excitement has not all been on the Democratic side, however.

Heavy hitters have flown in to support Herrell and get Republican voters excited in recent weeks. Vice President Mike Pence visited Roswell on Oct. 26, followed several days later by presidential adviser Kellyanne Conway, who was in Ruidoso on Thursday.

Doña Ana County has the numbers to make the difference in an extremely tight race, rated a toss-up by the respected Cook Political Report.

The county represents a third of all voters in the sprawling congressional district, which is the size of Pennsylvania. But can Doña Ana’s 116,797 voters overpower the conservative southeastern counties’ 156,756 voters — when Republican voters show up more reliably at the polls?

As of Thursday, 26 percent of the Doña Ana County’s registered voters had cast ballots, according to the Secretary of State’s office.

Democrats made up more than 50 percent of that total — 16,141 — while Republicans represented around 30 percent — 9,338, but Democrats and Republicans at that point were voting at a higher rate than their party’s share of registered voters in the county. That is a sign of enthusiasm, according to Sanderoff.

Meanwhile in Otero, Chaves, Eddy and Lea counties, Republicans had turned out in greater numbers than their Democratic counterparts and appeared to have more than made up the advantage Democrats were amassing in Doña Ana County, according to a review of early voting totals from the Secretary of State’s office.

In the final days of the race, Bishop said the local GOP is concentrating on making phone calls and arranging rides for those who might have difficulty getting to the polls. She said her voters have a distrust of the Democratic-led county clerk’s office, so the big push is for Election Day turnout.

Nayomi Valdez, the Democratic field coordinator in southern New Mexico, said Democrats have been working for months to expand their base with  aggressive voter registration drives at high schools and college campuses in the district, along with separate programs that targeted rural and Latino voters.

No one knows for certain who will win the get-out-the-vote contest until Election Day.