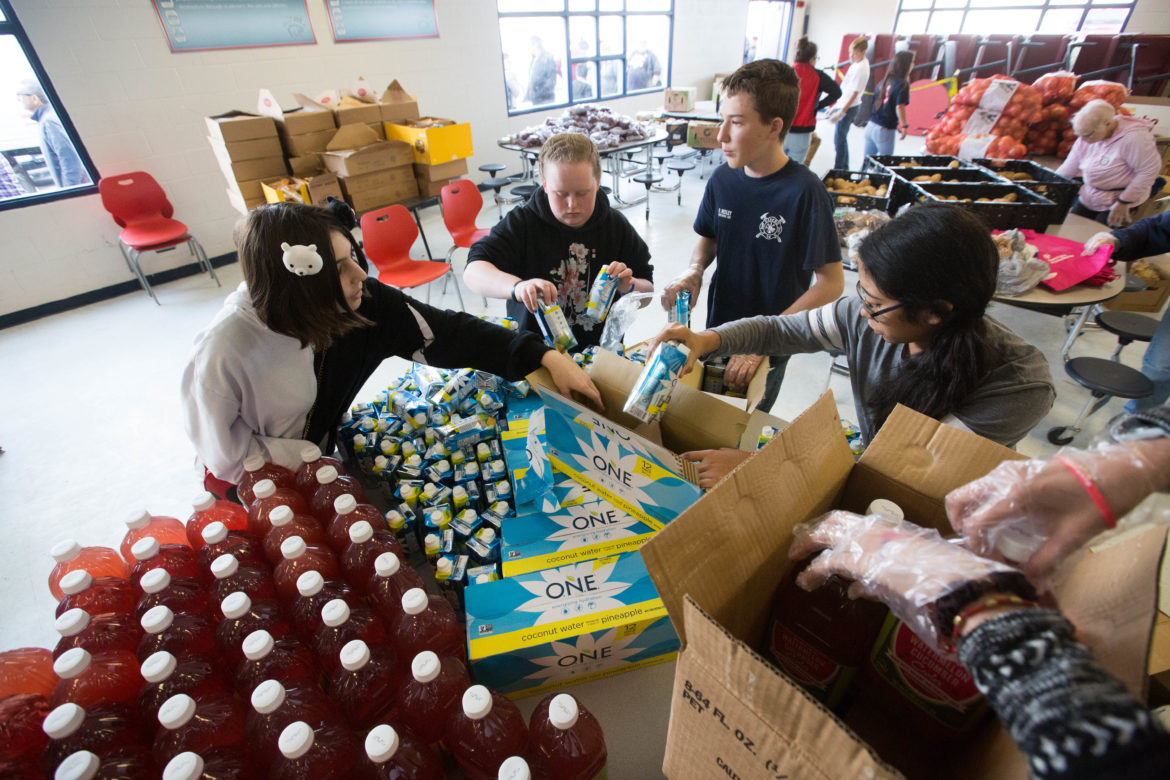 A walk around classrooms and its cafeteria reveals signs of the metamorphosis.

On any given weekday students drop in for healthy snacks or warm clothes in the school’s community room. Parents have access to computers, WiFi and office supplies to apply for jobs. Families and neighbors stop in for staples at a monthly food pantry operated by Roadrunner Food Bank.

Meanwhile, a mobile Boys and Girls Club, set up in the school’s cafeteria, keeps them busy and, some say, out of trouble.

Lynn is a community school, a model pioneered in the state at Albuquerque Public Schools.

It’s an idea as old as the one-room schoolhouse, but with a modern twist. Instead of sending students out into the world to get help for non-classroom challenges, the school brings the world to them.

Volunteers and organizations swarm Lynn to help children deal with the effects of poverty so that they can concentrate on learning. Like the rest of the state, three-quarters of Las Cruces school children are eligible for free and reduced lunch, an indicator of poverty.

Supporters of the changes point to signs of improvement at the school.

Since 2017, Lynn has moved from an “F” school to a “D” school in the Public Education Department’s school grading system. The student absentee rate has dropped from around 15 percent each day to about 8 to 10 percent, said Principal Toni Hull. That’s still high, but she hopes to bring it down even further. A new disciplinary approach that minimizes suspensions and seeks resolution to conflict has dropped the number of referrals for discipline from 52 in the first month of school last year, to 26 referrals in the same period this year, according to Hull. Both mean more students are in class and learning. 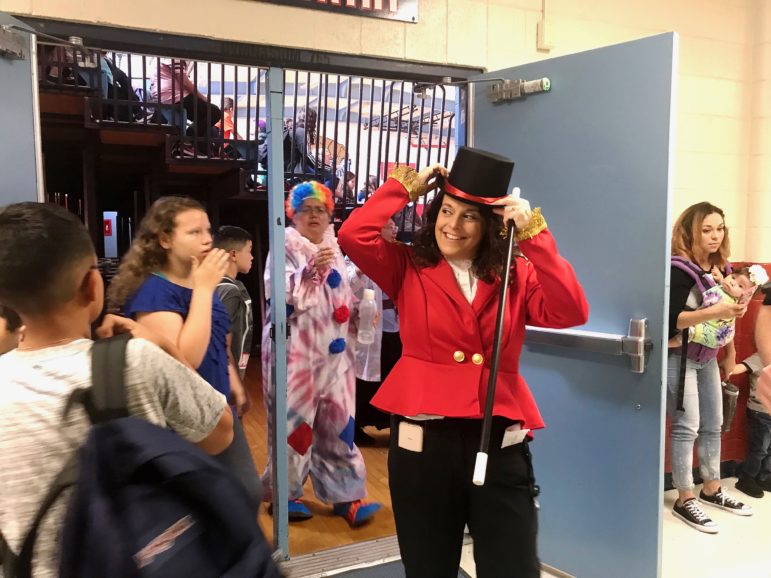 Lynn Middle School Principal Toni Hull gets ready for an assembly on the first day of school at Lynn in August. She wanted to set a different tone at the school as it ramps up its community school effort. “I just wanted it to be a memorable experience so that kids and teachers realize that something’s different. And it’s OK to have fun at school,” she said.

With the Legislature convening in January, some advocates, educators and lawmakers are pointing to community schools like Lynn as an example of what New Mexico needs more of, especially after last year’s ruling by a state district judge that found the state guilty of shirking its constitutional duty to adequately educate at-risk students.

Educating these student populations will command center stage next month when lawmakers converge in Santa Fe and a coalition of advocates, educators and lawmakers hope to persuade the Legislature and Gov.-elect Michelle Lujan Grisham to invest money in the community school model.

A community school model tries to learn why kids are missing school, having trouble concentrating or acting out. Are they at home with a sick sibling because their parents can’t take time off from work? Does getting to a doctor or dentist appointment take half the day because the family only has one car? Do they feel alone and isolated? Do they not have warm coats or decent shoes?

To address those real world problems, schools develop partnerships with health clinics, food banks and youth service organizations that are already helping children and bring them to the school — because that’s where the kids are. They support parents because that strengthens the family. They also work to engage parents because there is a direct link to student success when parents are involved in their children’s education.

Supporters of the community school idea will find an ally in Lujan Grisham if her rhetoric is any indication.

“You need to have a community school design, which brings the very social services to at-risk kids to those schools so that you’re navigating food security, health care, housing,” Lujan Grisham said this fall during a gubernatorial debate with Republican Steve Pearce televised on KOB. “You’re minimizing adverse childhood experiences. When kids have those things addressed, they’re much better able to close those achievement gaps and to focus on learning.”

Lujan Grisham has put community schools into her education platform. 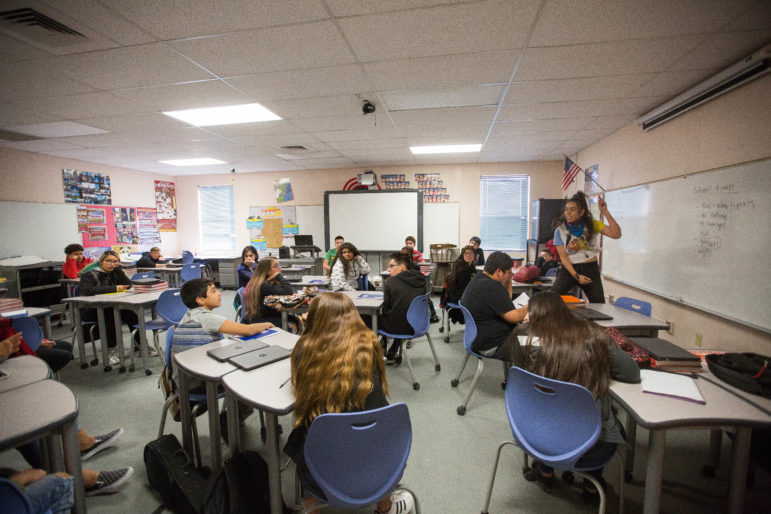 On a late fall afternoon, there is a bottleneck at the doors of the Lynn cafeteria as more than two dozen middle-schoolers stream in. They line up for a free dinner of soft tacos, their conversations and laughter bouncing loudly off the cinder block walls. About half of the students are here for Boys and Girls Club, the others for STARS, a program that connects students with mentors from local high schools.

Jason Bernal, teen coordinator at Boys and Girls Club of Las Cruces, said the organization has been expanding the kinds of activities they offer, branching out from games and exercise into STEM and art projects. He hopes to work with the kids on coding and building a website later in the year.

Boys and Girls Club hopes to expand to other schools within the district, Bernal said, “to give those kids something to do so they’re not getting into the wrong things, they’re not hanging out with the wrong crowds, they’re not wasting their time away with video games.”

Data collected by the Cradle to Career Policy Institute for Albuquerque Public Schools found that the more children took part in afterschool activities like the Boys and Girls Club, the fewer days of school they missed and the higher their grade-point average. 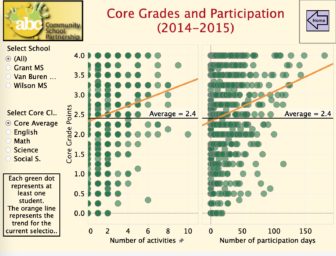 Since LCPS started the project, it has recruited more than 20 outside organizations and foundations.

Lynn is working with Ben Archer Health Centers on what will be the first school-based health center in a Las Cruces middle school, and it’s building the only dental clinic at a district school throug 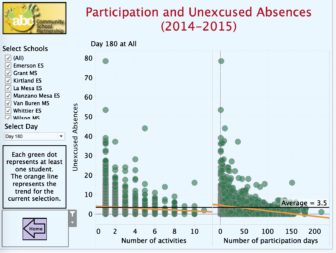 h a partnership with the Doña Ana Community College dental hygiene program. Behavioral health agency Families and Youth Inc. diagnoses kids on site who might need counseling and other services. Having those resources on campus will mean parents won’t need to take students out of school all or part of the day just to get to a wellness visit or dental appointment.

Las Cruces officials feel good enough about what’s happening at Lynn that they plan to expand the community school model to more schools, similar to the progression that happened in Albuquerque.

Jose Muñoz, who was in Albuquerque when community schools gained a foothold, said the model works in areas around the country and can do the same in New Mexico, where it would fit in communities as different as Las Cruces and Las Vegas.

“That’s the great flexibility of community schools — because it’s agile it can fit any context. In this role now, I see it thriving in rural, suburban and urban,” said Muñoz, director of the Coalition for Community Schools at the Institute for Education Leadership based in Washington, D.C.

Las Cruces is not as far along as its larger neighbor to the north and is feeling growing pains, said LCPS Superintendent  Greg Ewing. That has included some pushback from teachers, parents and students.

“For us, we have taken our time in rolling out the project. We’re building the model in one location that we hope to be able to replicate,” Ewing said.

She is motivated to put in the long days and some weekends because she wonders how much easier her own life might have been if her family had gotten the kind of help Lynn Community Middle School is trying to provide.

Like many students at Lynn, when she was growing up Chavez missed school because she had to help take care of her younger siblings.

“I was that kid, and I want to be the one that helps them,” Chavez said  “If my mom would have had more support, being a single mother, things would have been different. Even though I did push myself to succeed, it was harder.” 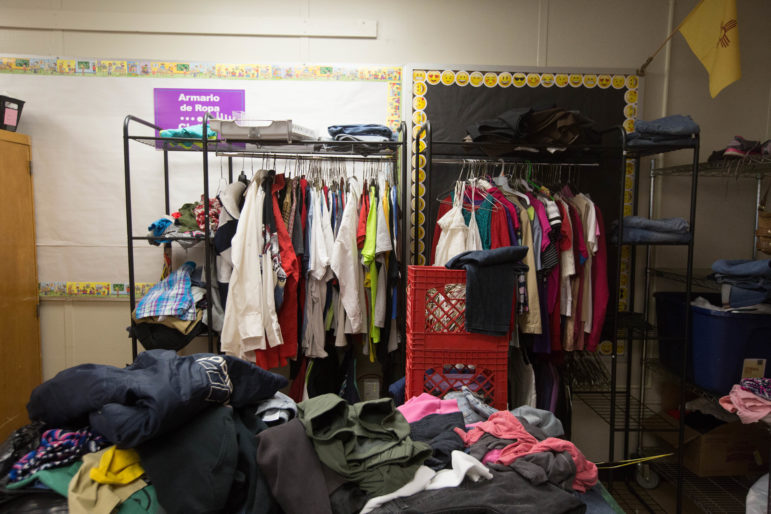 The clothing closet, set up in the community room in Lynn Middle School, where families, students and teachers can all come and get clothing if they need to, along with picking up healthy snacks provided by Casa de Peregrinos.

Going to the Legislature

Even though community schools are an idea that has the backing of the governor-elect, expanding the model beyond Albuquerque, Las Cruces and Santa Fe might be tough. The Legislature has not put any money behind the concept despite passing a Community Schools Act in 2013. The current efforts are funded by private money, grants and local governments, in partnership with school districts, said Edward Tabet-Cubero, executive director of the Learning Alliance New Mexico.

The New Mexico Center on Law and Poverty, which along with MALDEF successfully sued the state for shirking its constitutional obligation to educate at-risk and native students, believes the community school model is one of the remedies that can improve education for at-risk students. It will ask the Legislature and governor-elect to direct state money to spread community schools across the state, said Tabet-Cubero, formerly with the center and now part of a coalition of parents, educators and advocates pushing for more money and reform for public schools.

Even with an expect budget surplus, there will be a lot of demand on the $1.1 billion in “new money,” amid cautions over the volatility of the oil and gas industry that powers most of education spending.

Tabet-Cubero said lawmakers opposed to community schools often view the services they offer as “extras” when, in fact, they are central to educating these children.