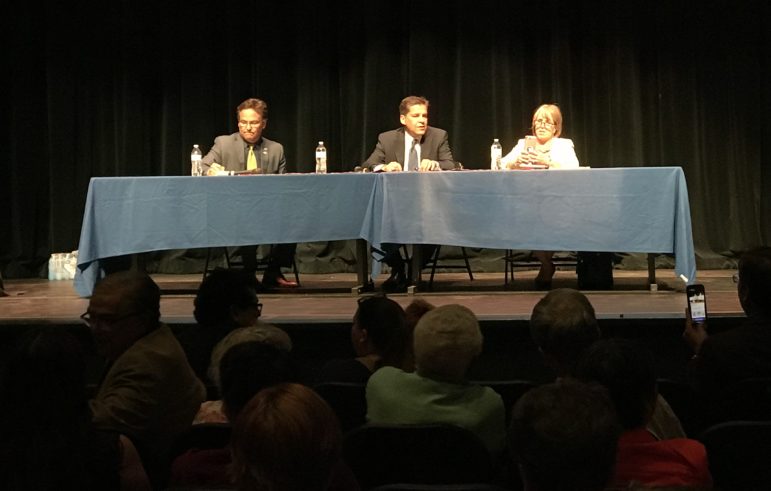 The Democratic candidates for governor, Jeff Apodaca, left, Joe Cervantes and Michelle Lujan Grisham meet for a forum at the Rio Grande Theatre in Las Cruces on Tuesday evening, May 1, 2018.

The three Democratic candidates for governor met in a forum in Las Cruces this week to showcase their plans to change the direction of New Mexico, which has suffered what some economists have called a lost decade after the Great Recession — a period when New Mexico lost more than 50,000 jobs, wages stagnated and more families ended up on public assistance.

The evening at the Rio Grande Theatre before a nearly full house was at times testy, with former media executive Jeff Apodaca taking a potshot at frontrunner Congresswoman Michelle Lujan Grisham for skipping previous forums with her opponents in his opener, and lawyer and state Sen. Joe Cervantes calling out Apodaca on his lack of understanding about New Mexico’s water woes in the face of Texas vs. New Mexico and Colorado. But on the whole, the format kept crosstalk at a minimum, with no rebuttals allowed and candidates unable to directly question one another.

The three Democratic hopefuls took on a wide array of topics, from legalizing marijuana (Apodaca: legalize, Lujan Grisham: legalize with safeguards, Cervantes: decriminalize), the behavioral health meltdown in the state, the state’s messy tax code, renewable energy plans, and education. I’ll look at three issues the candidates discussed, point to their published plans on those topics, and any track record they have.  You can hear the full, one-hour exchange on a Facebook Live web stream from the Democratic Party of Doña Ana County.

With the state perennially 49th or 50th in education in the nation, all the candidates have put out education proposals. There is an eerily similar tone to the plans — all involve getting rid of the PARCC test, changing how teachers are evaluated, and raising teacher salaries.

Apodaca, whose plan has been out since July 2017, accused the others of cribbing notes. Among the strategies he talked about at the forum were to bring back 8 percent of school funding that New Mexico spent out of state on things like standardized tests, and put it into classrooms, as well as moving $400-to-$500 million out the Public Education Department in Santa Fe and sending it out to the districts. Apodaca also wants to increase teacher pay for the three tiers to $43,000, $47,000 and $55,000. His education plan talks about shoring up the Lottery Scholarship and making it available for vocational training and for students who take a “gap year.”

The fund has been eroding for years, unable to keep up with student demand and tuition increases, and now covers about 60 percent of tuition, with lawmakers approving short-term fixes.

Cervantes pointed to a lawsuit against the PED as evidence that New Mexico is underfunding its schools, even as two-thirds of the state budget goes toward K-12 and higher education. Cervantes, a fiscal conservative, continued to express his hesitance at tapping the Land Grant Permanent Fund, whose proceeds help pay for education in the state.

“It’s not $23 billion we’re sitting on. It’s money we invest and get returns on. And frankly, it’s what opens our schools,” he said. In more practical terms, he said, plans to take more money from the fund just doesn’t  have support in legislative finance and appropriations committees. Still, his education plan outlines support for using some proceeds from the permanent fund for early childhood education, eliminating the overly simplistic A-F school grading system, advocates for more professional development for teachers and calls for unspecified competitive salaries and health benefits.

Vote Smart, a nonpartisan vote tracking website, shows a 2008 vote for the Education Funding Reform bill, which would have established a new formula for school funding based on a school’s poverty level, the number of English language learners, special education costs and student mobility. He has not had to vote on using the Land Grant fund as a senator because it has never made it out of committee in the Senate.

Lujan Grisham put out a 21-page proposal that, as she said in the forum, would include an “all of the above” approach. She wants to raise teacher salary tiers to $40,000, $50,000 and $60,000 to attract more teachers, guarantee universal access to early education, and change teacher evaluations to a system modeled on one from the Aspen Institute. Her plan calls for increased distributions from the Land Grant fund, revamping the state’s tax system (more on that later), and pulling money out of administration and compliance.

Because of former Education Secretary Hanna Skandera’s polarizing nature, one of the more interesting answers of the evening was when the candidates were asked the qualities they are looking for in the next education secretary. (You can hear answers at minute 32.)

Cervantes led off by talking about voting against Skandera despite pressure Gov. Susana Martinez put on southern New Mexico legislators. He said the question he was being asked at the time was whether she had the minimum qualifications to run PED. “The most important thing in the next secretary is not meeting the minimum expectations, it’s someone who exceeds the highest expectations and qualifications we could have.” He said he wants a secretary who sees teachers as collaborators, not as the cause of the problem.

Lujan Grisham said Skandera was given a particular task by Martinez: to destroy public education in New Mexico, as she had done in Florida. “What New Mexico requires and deserves is a secretary of public education who is clear about restoring the trust, dignity, faith and respect in our public education system,” she said.

Try to keep your eyes open for this one. It’s not fun talking about taxes and tax reform, but all three candidates expressed the need for New Mexico to fix its tax structure to make it more equitable and to fund a state government they said has been starved under Martinez and her still-pristine record of not raising taxes.

Apodaca singled out the 304 exemptions to the state’s gross receipts tax which create winners and losers depending on an industry’s lobbyist. He proposed eliminating taxes on small businesses to help fuel job growth, and eliminating ineffective tax exemptions. He said his Turn New Mexico Around plan would add $1.8 billion in new tax revenue through the creation of 225,000 jobs.

Both the Richardson and Martinez administrations cut taxes to boost economic development with little to show for it. New Mexico continues to have the second-highest unemployment rate in the nation, behind Alaska, and still has not returned to pre-recession job levels.

Cervantes corrected Apodaca on the corporate taxes, saying only C corporations and business income above $1 million were taxed in New Mexico. He voted against Martinez’s 2013 tax cuts. He said as a businessman, he and his farming family could tally up the tax cut on one side of the ledger and the rise in the gross receipts taxes approved in Las Cruces,Doña Ana County, and cities and counties around New Mexico to make up for lost funding from the state.

His campaign website says Cervantes would end tax incentives used to try to lure out-of-state companies — “they know there’s always a better deal somewhere else,” he said at the forum — and instead create jobs by investing in infrastructure and transportation, renewable energy projects, mobile broadband and guaranteeing low-interest small business loans and start-up grants.

Lujan Grisham touted her no vote against the congressional Republicans’ Tax Cuts and Jobs Act before shifting to New Mexico. She said it was clear that the corporate tax cuts only shifted the tax burden from the state to local governments.

“We should rebalance our tax system so that it is fair and favorable to New Mexicans who need it the most,” she said, and that there were proposals already on the table that have support. Lujan Grisham also said the state should be capturing internet sales and taxes from out-of-state companies.

The three candidates were in wide agreement on one particular topic — the mess the Martinez administration had made of the state’s behavioral health system when she froze Medicaid funding to more than a dozen New Mexico agencies for alleged billing fraud in 2013. Ultimately, the 15 providers accused of fraud were exonerated, though many have since gone out of business.

When asked how to improve the mental health system in New Mexico, Lujan Grisham started with: “Have the behavioral health system that’s required by law.” She drew a straight line from the disruption of mental health and addiction services to the crime and homelessness problems in her home city of Albuquerque, as well as problems for veterans — women veterans and their children in particular. She said the whole system needs a reboot: it should focus on education and prevention, used evidence-based treatment and have long-term case management and support to sustain vulnerable populations.

Cervantes said there have been a lot of mistakes made in behavioral health, including under Lujan Grisham’s time as New Mexico secretary of health, citing the closure of local clinics. “We need to treat behavioral health in our local communities where their families have the resources.” He lauded the work of state Sen. Mary Kay Papen, and the assisted outpatient treatment law that keeps mentally ill people out of jails and receiving treatment in their communities.

Apodaca said the state is likely to lose a lawsuit filed by the behavioral health agencies “because we penalized without due process.” He said the state should settle the case, work to get the agencies back up and running and create legislation that requires due process so that a governor could not unilaterally shut down providers again.

Papen in both 2017 and 2018 sponsored legislation to create due process for Medicaid providers that passed overwhelmingly in the Legislature, and with no “no” votes in 2018. The bills were pocket vetoed by Martinez.