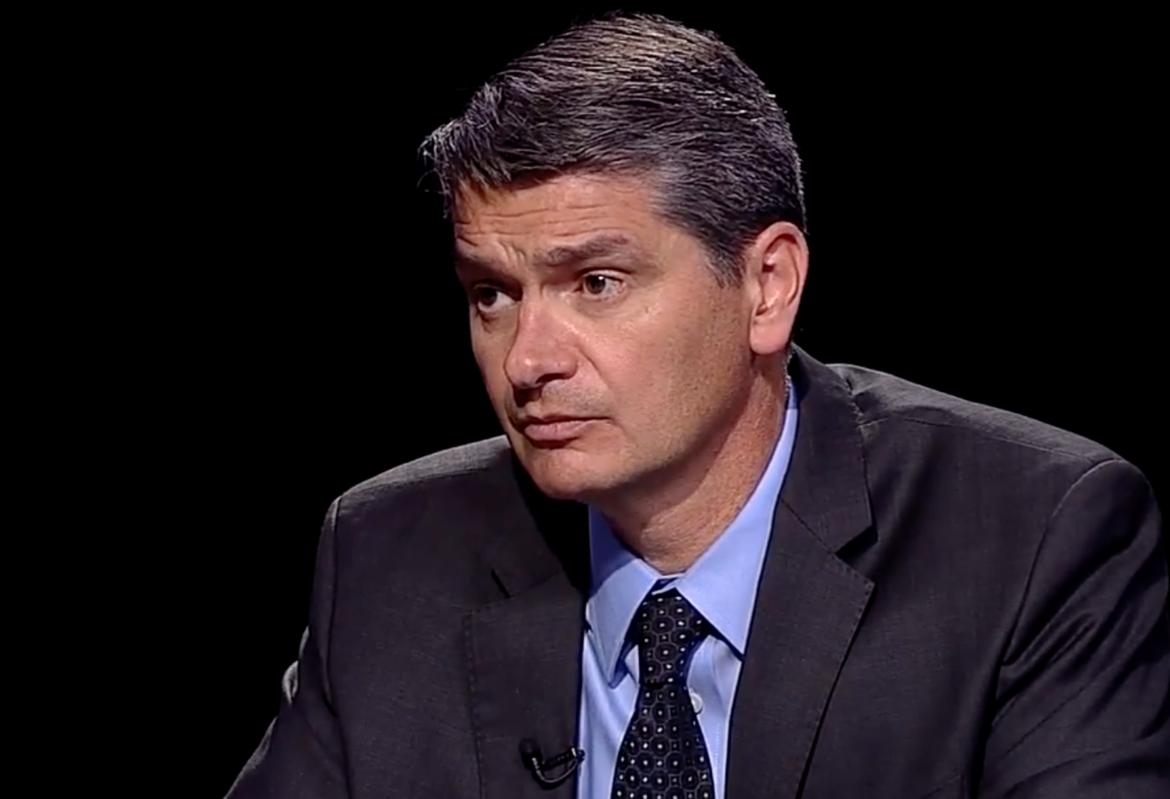 The executive director of the state Martin Luther King Jr. Commission had just learned from a reporter that Mayor Tim Keller had hired former U.S. Attorney and defeated congressional candidate Damon Martinez as a senior policy adviser for the Albuquerque Police Department.

Waites, who is black and also serves as chairman of the Albuquerque Police Oversight Board, was outraged last year by the results of a large-scale federal law enforcement operation. Overseen by Martinez, agents had arrested a grossly disproportionate number of black people for relatively minor crimes in 2016.

“I have very, very serious concerns about this,” Waites said Monday of Martinez’s hire, adding that he had heard nothing about it from the Keller administration. “I’m just very surprised that the administration would make a hire like that given everything that happened.”

Keller’s move felt “personal” to Waites, he said, in part because he’d been racially profiled himself over decades in Albuquerque.

Adding Martinez to the administration has put Keller in a politically thorny situation, largely because of how he and Martinez have spoken publicly in the past about the sting operation, led by the federal bureau of Alcohol, Tobacco, Firearms and Explosives (ATF). 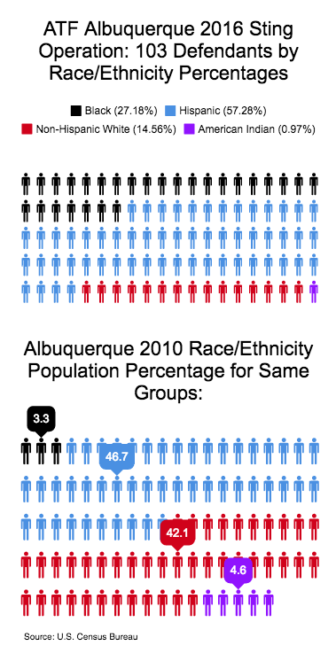 On the campaign trail last fall, Keller condemned the operation for its “racial profiling” and said its tactics were “wrong” during a mayoral forum hosted by the local chapter of the National Association for the Advancement of Colored People (NAACP.)

That same month, Martinez defended the operation in a lengthy, televised interview with NMID and New Mexico In Focus, saying the ATF was invited to Albuquerque “in the middle of a crime wave” at a time when APD was too short-handed to deal with it. He touted the large number of arrests and said guns and drugs had been taken off the streets.

Waites isn’t the only one concerned by Martinez’s joining APD, which the Keller administration announced via news release last Thursday.

On Monday evening, about 20 residents — many of them Keller supporters who represent community groups, including Black Lives Matter, Millions For Prisoners and Save the Kids — met with city Chief Administrative Officer Sarita Nair in a City Hall conference room for more than an hour. The meeting included some tense exchanges.

Activists criticized Nair for bringing Martinez on board at a six-figure annual salary to “oversee the development of strategic policies designed to improve APD’s ability to fight crime and ensure the successful prosecution of criminals,” among other duties.

Using words like “outrageous” and “disgusting” to describe the hire and calling Martinez “unqualified,” they demanded Keller and Nair “find a way to get rid of this guy,” according to a video of the meeting obtained by NMID.

One woman predicted how Keller decides the issue could turn into a “watershed moment” for the new mayor. If he stuck by the former prosecutor, she said, it could cost Keller the support of a broad swath of the progressive base that helped sweep him into office last year.

Another woman, Selinda Guerrero, who represents Millions for Prisoners and Black Lives Matter, told Nair hearing about Martinez’s hiring “felt like I had been punched in the stomach, hard, by Tim Keller.”

Then she said what at least five other people told Nair during the hour long meeting: “People in this room worked really hard” to help get Keller elected.

In a follow-up interview, Guerrero said many of those who attended the meeting were hopeful Martinez would be dismissed.

“This guy just can’t have a policy job in an already troubled police department,” she said. “To have somebody with that history — what would stop him from carrying out these types of operations again? He hasn’t apologized or even admitted he was wrong.”

Nair listened, acknowledging the administration should have consulted community members before hiring Martinez. She told them the city did not use a competitive hiring process or gather resumes to fill the newly created position — and that, to the best of her memory, Martinez had approached city officials about a job, not the other way around.

Nair told those gathered Martinez was hired to help turn around the troubled APD Crimes Against Children Unit and modernize its evidence lab. He also will help to craft policies and other tasks unrelated to ongoing reform efforts forced by the U.S. Department of Justice, whose investigation confirmed widespread excessive force in the department. The reforms have consumed much of APD’s resources and manpower, Nair said, leaving other problems unaddressed.

Nair offered no hints as to whether Martinez would remain employed.

Peter Simonson, executive director of the American Civil Liberties Union of New Mexico, expressed concern that the city hadn’t conducted a broad search for the position. But  Simonson, a longtime advocate for APD reform, had a mixed opinion on whether Martinez is right for the job.

“On the one hand, the ACLU had grave concerns about that ATF operation and the racially disparate effects that it had on our communities,” he said. “And at the end of the day, that operation took place on Damon’s watch, so I would want to know whether the mayor questioned him about that and how it would affect the way Damon carries out the new job.

“But Damon’s leadership was important during the DOJ reform process. I think that other U.S. Attorneys would have taken a more passive role in something like that, and I attribute the fact that there’s been progress with the DOJ largely to Damon’s work.”

About the 2016 Albuquerque sting operation

Beginning Monday, NMID has sought to interview Keller about Martinez’s hiring. Thursday morning a spokeswoman texted to say Keller would be available for an interview Friday at noon. NMID plans to conduct the interview and will publish the mayor’s comments.

Martinez did not respond to messages seeking comment for this story. He has never publicly acknowledged his role in the 2016 operation, citing what he says are federal policies that prevent him from speaking about it. 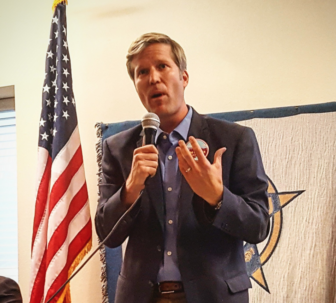 An investigation by NMID last year found indications that, as U.S. Attorney for New Mexico, Martinez helped bring the ATF team to Albuquerque and oversaw the operation as it unfolded.

One document detailed the numerous oversight responsibilities for U.S. Attorneys in operations like the one carried out in Albuquerque.

An “executive summary report” prepared by ATF described the operation’s aims and “successes.” It noted Martinez was so pleased with its results that he “asked and offered to travel to the city selected for the next” operation to “sell the … product” to that city’s top federal prosecutor.

It’s not clear whether Martinez touted the operation elsewhere.

During last year’s interview with NMID and New Mexico In Focus, Martinez focused on the quantities of guns and drugs allegedly seized in the operation: 17 pounds of meth, 2.5 pounds of heroin, 1.5 pounds of cocaine and 127 firearms. Those totals came from the arrests of 103 people and, according to several attorneys who practice regularly in federal court in New Mexico, did not amount to a highly successful operation that would stanch crime rates in the city. Martinez would not say during the 2017 interview whether he considered the sting a success or whether those arrested met the “worst of the worst” criteria he and other federal officials touted at its conclusion.

Condemning the ATF operation wasn’t Keller’s only comment about racial profiling on the campaign trail last year. At the same NAACP forum last September, he and the other candidates were asked directly how they would keep biased policing out of APD.

Keller said he would work more closely with the Police Oversight Board on racial profiling as a way to “formalize” accountability mechanisms for officers who cross the racial profiling line. 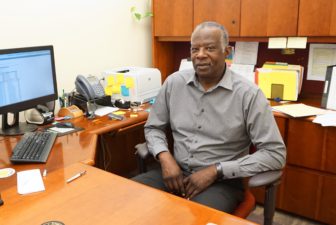 Waites, the board chairman, told NMID no one from the Keller administration had approached the board to discuss racial profiling since taking office last December.

“I obviously sit on the board, and I have a lot of interactions with the upper echelons of the police department,” Waites said. “Mayor Keller has never approached the POB to talk about racial profiling or staffing at APD or any hires he was considering. Like I said the other day, all this stuff about Mr. Martinez is new to me. I’m concerned, and I want to learn more about it before I say anything more.”

The activists weren’t finished after their Monday meeting with Nair.

The following evening, several walked around the Albuquerque Convention Center during Keller’s neighborhood summit handing out slips of paper pointing people to NMID’s reporting about the sting, and urging them to call the mayor and oppose Martinez’s hire.