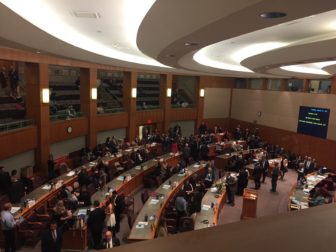 Lawmakers sometimes use “dummy” bills at the end of each legislative session to resurrect dead bills, to push through eleventh-hour measures or to respond to emergencies.

But even veteran observers of New Mexico’s legislative process can find that “dummy” bills obscure an already opaque process.

“Dummy” bills are usually—but not always—vehicles state lawmakers use after the deadline passes for introducing new legislation. Some legislators have expressed an interest in challenging the “dummy” bill process in the interest of shining more light on the legislative process.

In an effort to pull back the curtain, New Mexico In Depth examined 116 dummy bills by searching for legislation titled “PUBLIC PEACE, HEALTH, SAFETY & WELFARE,” a dead giveaway of a generic —“dummy” bill. Even when the bills are amended, they keep those generic titles (regular bills have distinctive titles that speak to issues they address).

Only 13 of those bills have been printed, and gone before committees.

Here are a couple of “dummy” bills we found interesting.

In Carlsbad, a cavern created by an oilfield trucking company brine well could collapse at any time; endangering a mobile home park, two highways, a projected $750 million dollars in damages. The two and a-half football field-sized sinkhole is about to become a money pit.

Currently, the proposed $6.3 billion state budget has appropriated just over $30 million from the New Mexico Road fund to address the crisis. The Energy, Minerals and Natural Resources Department would oversee the remediation, spending the money over a period of three years. Any unspent money would return to the New Mexico Road fund.

The proposed state budget has language that makes the $30 million appropriation conditional. It all hinges on whether Gov. Susana Martinez signs a bill that would change how motor vehicle excise tax proceeds are distributed to ultimately help pay for the brine well cleanup.

Bipartisan Senate Bill 226 sponsored by Sen. Carroll Leavell, R-Jal, and Sen. John Arthur Smith, D-Deming, would shift a portion of motor vehicle tax revenue into the state road fund to help fund cleanup. The bill mandates at the end of each month a little over four percent of the excise tax would be placed in a special fund, generating an estimated additional $6 million revenue.

That money, distributed to the cleanup from the road fund, would account for a little more than half of the $10 million that spent each year on the cleanup. The rest of the money would come from the New Mexico Road Fund proper, meaning that the road fund would only take a $3.5 million hit each year to pay for the brine well project.

A dummy bill relates to the management of the brine well disaster funds. House Bill 319, introduced by Rep. Nate Gentry, R-Albuquerque, creates an authority with eight seats, headed by The Energy, Minerals and Natural Resources Department to oversee remediation. The bill cleared two House committees and passed the House floor 65-2. With 48 hours before the session end, the legislation was referred to the Senate Committee on Conservation.

Sen. Joseph Cervantes, D-Las Cruces, who chairs that committee, told NMID he did not know when the bill would be heard, if at all. The bill is most likely dead as it has little time to be reviewed.

The authority has a sunset clause, it dissolves in 2026, but it is unclear what would happen to the fund at that time.

House Bill 330, sponsored by Rep. Rudolpho Martinez, D- Bayard, relates to water, a valuable and fought-over resource. And while it won’t make it into law this session (Martinez conceded as much Wednesday morning), consider it a glimpse of what might come next year.

Martinez’s bill would have authorized $50 million to fund various water projects in southwest New Mexico. For years debate has raged about what to do regarding the pristine Gila River.

Whether to dam or divert the river is a major source of often passionate disagreement.

Let’s pause to catch up on a bit of history if you’re lost. New Mexico’s Interstate Stream Commission voted in 2014 to build a diversion on the Gila River. Local governments in southwestern New Mexico took over the project. In 2015, officials from those local governments signed an agreement to create the New Mexico Central Arizona Project Entity, or CAP Entity. It’s meant to administer and manage whatever project emerges concerning the Gila.
Martinez said Wednesday he proposed the bill because he has not yet seen a business plan from the CAP Entity.

If he wins re-election this year, Martinez said he will likely file it again in 2019.

New Mexico In Depth has put 2018’s dummy bills  in a database, and will update the list if more appear.