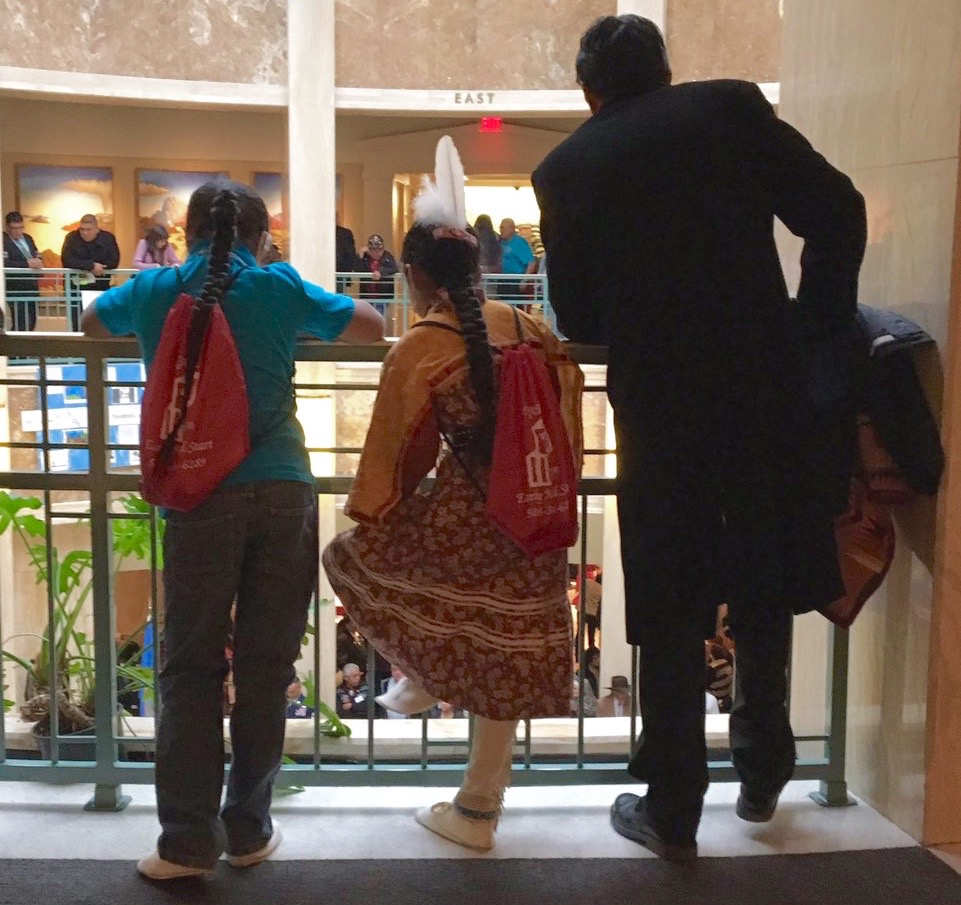 Visitors to the Roundhouse peer down at American Indian Day activities in the Rotunda, 2017.

For Native Americans at the Roundhouse, the annual American Indian Day, celebrated on Friday, is a day to commemorate the struggle Native politicians have endured to find their voice in a predominately non-Native Legislature.

Tribal leaders who moved to establish formal governing institutions or processes for their communities in the United States initially established relationships and forged agreements with the federal government.  It wasn’t until the 1980s that Native leaders began to turn their attention more fully to developing stronger voices within state houses.

The Reagan administration during that decade made dramatic cuts to social welfare programs, including funding that provided health care and other services to tribes. Reagan’s policy toward American Indians was in line with his general philosophy of moving resources and decision-making authority to states rather than centralized federal control.

“This whole state’s rights agenda really forced a relationship where there was no Indian policy, there was no delineation of any shared responsibilities between the state and the tribes,” Regis Pecos, co-director of the Santa Fe Indian School Leadership Institute, said.

Pecos is well-versed with the history of tribal-state relationship building. From Cochiti Pueblo, he’s served as both lieutenant governor and governor and is a lifetime member of the pueblo’s Tribal Council. For 16 years he served as executive director of the New Mexico Office of Indian Affairs, under four administrations, and was chief of staff to the New Mexico speaker of the House for over a decade. These days, he serves as a senior policy adviser to Rep. Sheryl Williams Stapleton, D-Albuquerque, who is House majority floor leader.

In addition to Reagan-era reductions in federal funding, he said, Native Americans were required to switch their healthcare providers from Indian Health Services to different managed care organizations in the state.

“Tribes were fighting Congress to maintain [the original] system so that we would not be invisible in the health-care reform,” Pecos said. “Where there was no inclusion of tribes … we started to amend laws to include tribes in the governmental framework of New Mexico.”

Through their continued involvement in state politics, Native American leaders have been able to assert themselves and increase their influence in New Mexico.

“Over the last 30 years, New Mexico became the model nationally, in establishing a state policy for state-tribal relations,” he said.

But despite decades of involvement, Pecos said, there are still a lot of challenges in maintaining relationships and passing legislation. Native Americans in the state, he said, still live with glaring disparities in healthcare, education and environmental injustice. 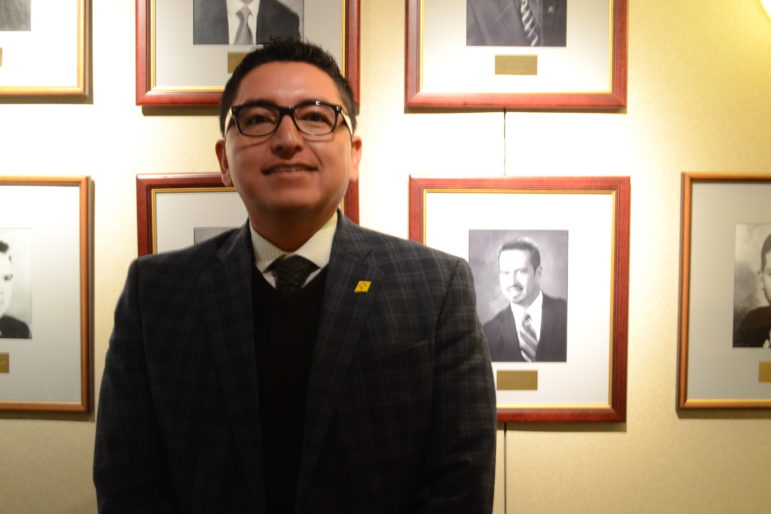 “Native American day is about recognizing the government to government relationship between tribes and the state,” Rep. Derrick Lente, D-Sandia Pueblo, said. Lente, from both Isleta and Sandia pueblos, represents House District 65, which sprawls northwest from the tip of the Albuquerque metro area through Rio Arriba, Sandoval and San Juan counties, including parts of Navajo, Pueblo and Apache tribes.

“It’s evident that there’s a lot of overlap in need, and rather than separate Navajos, Pueblos and Apaches, I try to collectively push an aggressive agenda,” he said. That agenda for him includes education, support for the elderly, protection for sacred sites, and dominion over natural resources.

Getting legislation passed as a Native lawmaker isn’t without its challenges, given Natives are underrepresented in the statehouse. A New Mexico In Depth analysis last year found only six percent of New Mexico lawmakers are American Indian, while 10 percent of the state’s population is Native.

“It takes a lot of educating to help folks understand what Native Americans are all about … including statutes and sovereignty,” he said. “Sometimes I have to go far back into history.”

Relationship building, he said, is crucial. “In some cases, I’m one of the few Native Americans they (other lawmakers) know.”

In 2018, Lente has brought back a bill that would allow Native American children access to culturally sensitive education and he is working on a memorial that would protect Chaco Canyon.

“We learn differently,” he said, “A lot of what we learn comes from first-hand experience, whether it’s in song, in kivas in pueblos, or in cultural sites like Chaco Canyon.”

House Bill 151 would amend the current Indian Education Act to require a needs assessment of American Indian students for the prioritization of budgets in historically defined Indian impacted school districts and charter schools, and it requires those schools to create “systemic frameworks” for improving educational outcomes. A similar bill was introduced during the last session, but was vetoed by Gov. Susana Martinez.

“The discrepancies [in education] are wide, we need to think outside the box and push for culturally relevant and realistic education,” he said.

Indeed, statistics found in the bill’s fiscal impact report produced by analysts for the state legislature are stark:

Lente serves in the House with several other Native lawmakers — D. Wonda Johnson, D-Church Rock, Georgene Louis, D-Albuquerque, and Sharon Clahchischilliage, R-Kirtland. All of them focus their initiatives to benefit tribal communities and people.

Johnson is co-sponsoring, among other bills, HB 149, which creates a Native American Income Tax Settlement Fund from which settlement payments may be made to Native American veterans who while on active military duty had state personal income taxes withheld from their military income.

Georgene Louis has introduced a bill to allow the sale of alcohol on the gaming floor of a racetrack casino within a tribal facility that is regulated under a tribal-state gaming compact.

And Clahchischchilliage has initiatives to increase the vital record free from $10 to $15 and to recognize a native filmmaker, among several others.

And then there’s Sen. John Pinto, D-Gallup, one of the longest serving lawmakers in New Mexico. Pinto, 93, works hard to bring resources to the northwestern New Mexico district he serves, which has a large Navajo population. This year, he has bills to fund a water well in the Baahaali chapter of the Navajo Nation and to fund a study for an emergency phone system in San Juan County.

He’s also introducing a memorial declaring Friday — American Indian — as “Water is Life” day. He introduced a similar memorial last session. The memorial calls for the recognition and protection of water as a sacred resource.