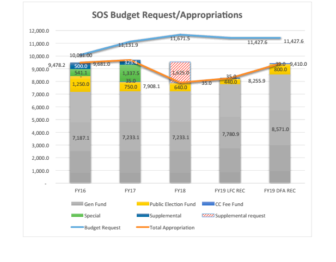 Say you want to run for a spot on the state Supreme Court or New Mexico Court of Appeals. How about a seat on the Public Regulation Commission?

Candidates for New Mexico’s two top courts and its utility commission are eligible to apply for public dollars to finance their campaigns through the New Mexico Voter Action Act.

Fifteen candidates have started the process to qualify for public financing for the 2018 election. If all 15 qualify, a candidate running for, say, a statewide judicial position who normally would receive $100,000 would get much less — around $42,000, Toulouse Oliver said.

The fund that finances the campaigns – the Public Election Fund –is underfunded because the Legislature has taken money from it to pay for operations at the Secretary of State’s office during the past two years.

The state could face a lawsuit over the chronic underfunding, Toulouse Oliver said.

“If you look at the statutes it’s not like (they say) if the Secretary of state has a shortfall you can move money over there,” she said. “As we’ve mentioned to staff, the risk we could run if they continue to take from the public election fund to put into our operating budget and there’s not enough funding for candidates we could get sued for that. So we are potentially vulnerable to litigation.”

The information about the Public Election Fund came out of a hearing the agency had before the House Appropriations and Finance Committee on Wednesday afternoon.

State lawmakers on the committee were adopting a budget request for the agency that will eventually wind up in the overall state budget for the year that starts June 30. Before legislators were competing budget recommendations for the Secretary of State’s office, one from Gov. Susana Martinez’s budget department recommending $9.4 million for the agency compared to $8.25 million recommended by the Legislative Finance Committee, the Legislature’s budget arm.

Toulouse Oliver read that as a good signal.

“The more we talk about it the more the committee is starting to understand the fundamental problem,” she said.