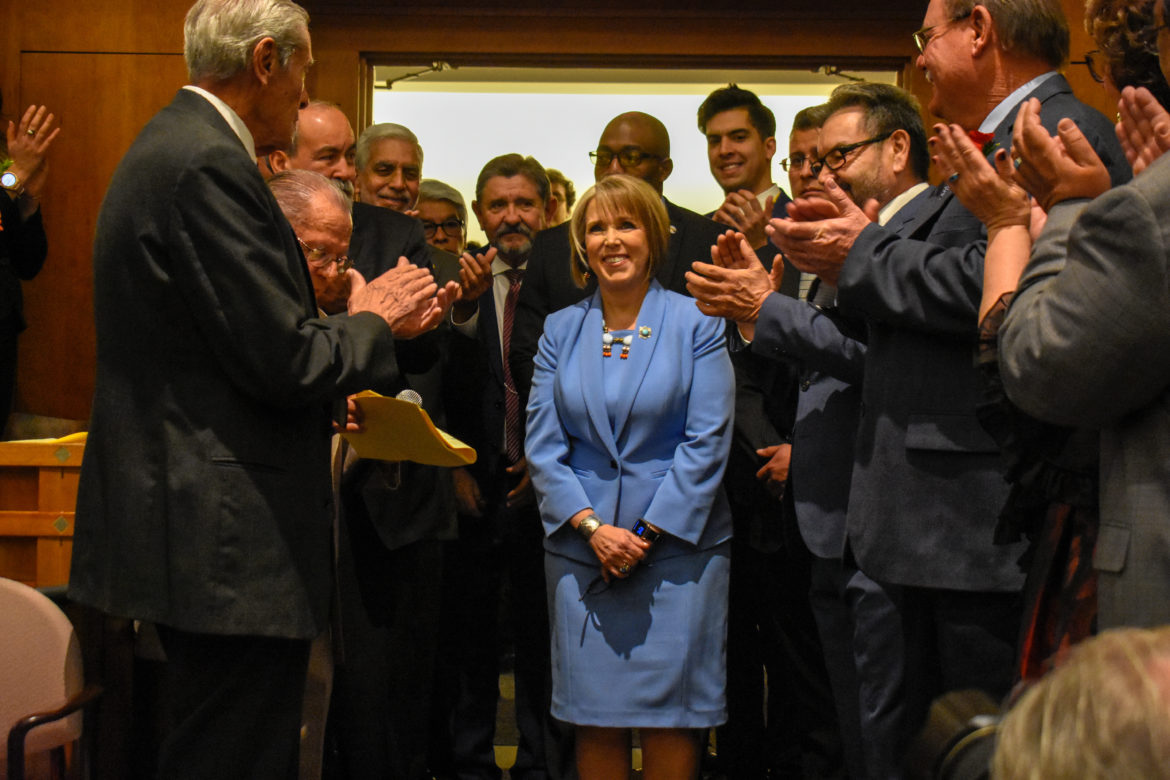 New Mexico Governor Michelle Lujan Grisham is applauded as she makes her entrance to the joint session of the New Mexico Legislature on opening day.

On Tuesday, there was a pronounced note of positivity for legislators in the Democratic majority as they grasped the opportunity to move on long pent-up agendas with a Democratic governor. It’s honeymoon time. And they came to opening day of the 2019 legislative session ready to play.

Gov. Michelle Lujan Grisham, a three-term congresswoman and former longtime cabinet secretary in state government, has repeatedly trumpeted her hopes for New Mexico to make a “moonshot” for education in her first session. But in a 50-minute speech Tuesday it sounded like she was shooting for the moon, too. The governor reeled off area after area of Democratic funding priorities, from increased pay raises for state workers, increasing the minimum wage, to boosting renewable energy in the state.

The leadership of women was powerfully on display. For the first time in state history, females now represent a third of the New Mexico Legislature — 38 women — and nearly half of the state House of Representatives. Fifty years ago, there were just two.

“The feeling of hope and optimism in this building today is unique in perhaps the history of our state,” Democratic Speaker of the House Brian Egolf told a crowded chamber before Gov. Michelle Lujan Grisham started her inaugural speech as the state’s chief executive. “We are showing the rest of the country … diversity is a strength and it does not need to lead to division and rancor.”

The governor was upbeat to strong applause when she led her speech with her proposal to spend more on education.

“What does a moonshot look like? A half a billion dollars for our classrooms,” she said.

But underlying the conviviality and general agreement among Democrats ran a serious thread.

Both the governor and Legislature released budget proposals prior to the session, expecting an increase of between 11 and 13 percent in spending next year. The bulk of that increase will go to education, no surprise given the hammer of District Judge Sarah Singleton hanging over lawmakers.

In her speech, the governor directly spoke to Singleton’s ruling, which found last summer that the state chronically underserves at-risk students and directed New Mexico to increase its education spending to address those needs. Lujan Grisham vowed a 200 percent increase to the Indian Education Fund, $55 million more for bilingual and multicultural programs, and more dual-language qualified teachers.

Republican members of the Legislature, in the minority, were polite during the governors’ entrance and speech, but largely perfunctory with intermittent applause. At times they were deafeningly silent. Like when Lujan Grisham called for a bill to strike what she called the state’s “old criminal abortion law” and received thunderous Democratic applause.

And their leaders were blunt in their assessment of her budget proposal, which by extension could be applied to the legislative proposal. The bottom lines of the two proposals are not far apart.

“I was astounded to be real honest in the amount of money she is willing to spend,” said James Townsend, the House’s top Republican from Artesia. “My definition of what prudent is and hers must be very different because what I heard this morning was not prudent.”

“You can talk about all those things until you’re blue in the face but you’ve got to have a sound amount of money going into recurring revenue cause if you don’t it will come back and bite you right square in the butt,” Stuart Ingle of Portales said.

Beyond the budget, some particularly contentious debates are on deck. Some will be bipartisan and there will also be rifts along a longstanding rural/urban divide within the Legislature

While the bottom lines of the legislative and executive budget proposals are largely in sync, there are cuts to programs and agencies, and increases to others, sprinkled throughout. Expect a lot of those cuts to engender strong debate among legislators who will undoubtedly have their ears bent by lobbyists and other advocates. 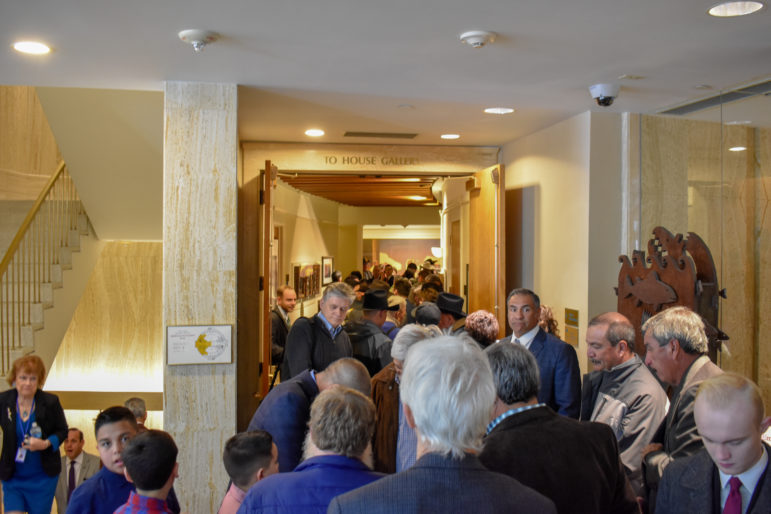 The halls of the New Mexico Legislature buzzed with excitement as crowds of people waited to pass security for the first day of the legislature.

Then there are big issues. One will be how much authority and how much transparency to build into the new state ethics commission. Both budgets include $500,000 for the agency, significantly less than the $800,000 to $1 million bandied around over the past year by ethics reformers.

Expect a push to tap the permanent land grant fund for early education to remain strong. The initiative gained momentum last year when it passed the House. Lujan Grisham rebranded the fund in her speech, saying it was time to “take a responsible pinch of additional money from our Permanent School Fund.”

But powerful senators on the Senate Finance Committee can be expected to continue to strongly resist that approach.

In a 60-day session, every issue under the sun gets debated at the New Mexico Roundhouse.

The governor proposes eliminating the $50 million annual cap on payouts to film companies. New Mexico pays a baseline 25 percent rebate to eligible film and TV productions. Each year what the state owes to productions exceeds the $50 million cap, creating a backlog of unpaid rebates. Lujan Grisham wants to “unleash” the film industry by removing the cap. But legislative budget gurus worry that unlimited subsidies could break the state’s bank.

Then there’s cannabis. How contentious the debate over legalizing recreational use will be remains to be seen. But with New Mexico increasingly surrounded by states allowing use by adults, there are many lawmakers who talk about a large, new market that could produce millions of dollars in tax revenues. Lujan Grisham has given conditional support to the idea. But a number of senators, enough to block the proposal, remain unconvinced.

There will be a big push to incentivize growth in renewables. Lujan Grisham reiterated her campaign promise to mandate 50 percent renewable power by 2030, and 80 percent by 2040—as just the starting point. She also reiterated a pledge to curb methane emissions, a move she casts as addressing climate change, making money for the state, and creating jobs.

In pivoting New Mexico from federally led trends, the state will sign on to the U.S. Climate Alliance, a bipartisan group of governors committed to upholding the Paris Climate Agreement’s goals. Lujan Grisham said she’ll join the alliance, and direct state agencies to develop a comprehensive climate plan.

As the state works to diversify its economy from the oil and gas industries long dominant, Lujan Grisham called for doubling the local economic development act for public-private partnerships to give entrepreneurs a chance to get started. An additional percentage point from the Severance Tax Permanent Fund could pay for $50 million that can go right to “mom and pop businesses.” A state outdoor recreation coordinator, mirroring a model established in other western states, could work to put New Mexico on the map for bikers, hikers, campers, hunters and anglers.

Lujan Grisham, a cabinet secretary under Republican and Democratic governors, will likely be able to build on her relationships with lawmakers from both sides of the aisle. And there is the added benefit that her priorities might be shared by Democratic legislative leaders. In fact, House Speaker Egolf laid out some of the same priorities as Lujan Grisham in a speech he gave prior to Lujan Grisham’s entrance into the House chamber on Tuesday.

The Roundhouse teemed with people Tuesday as it usually does on the first day of any session. But this year was different in the uptick in security evident at the Roundhouse. A long line of people were checked for weapons before they entered the gallery overlooking the House floor where the state’s new governor was scheduled to speak.

It was the first time since 2001 after the 9/11 terrorist attacks that the Capitol had imposed security measures, said Raul Burciaga, director of the Legislative Council Service. The measures were implemented after a legislative subcommittee recommended heightened security in December. Burciaga said he did not know if the heightened vigilance was a response to direct threats or something more general.