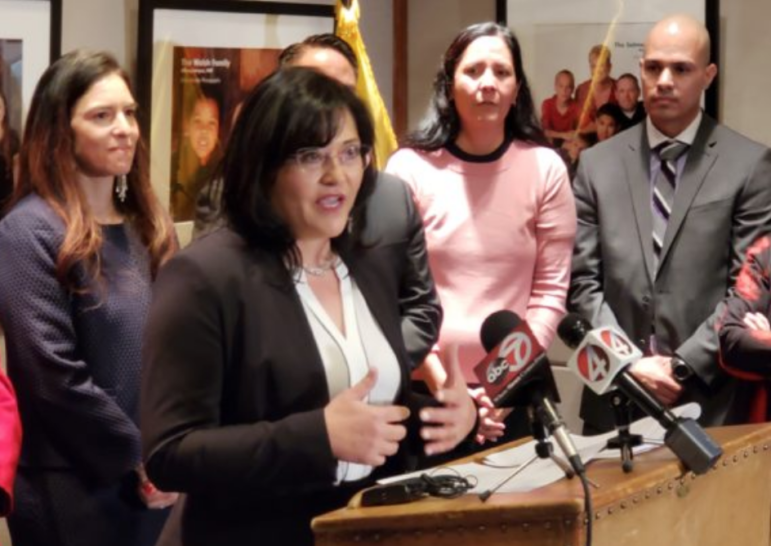 New Mexico’s moonshot for education finally has someone permanent at Mission Control. Gov. Michelle Lujan Grisham on Thursday named Karen Trujillo as her secretary of education, along with a diverse leadership team that has as its mission transforming the state’s beleaguered public school system to educate children better — and finally erase the achievement gap for at-risk students.

The New Mexico State University education researcher and newly elected Doña Ana County commissioner has two credentials whose lack dogged Martinez appointee Hanna Skandera — she’s a native New Mexican and spent years at the front of a classroom. And she and her husband, Ben Trujillo, sent their three children to public schools.

She also struck a different tone than former governor Susana Martinez’s education secretaries. She spoke of listening to what communities and schools want instead of telling them what to do.

The real question is: Does she have the right stuff? Is she the transformational leader that educators and parents are looking for after eight years of testing and accountability-based reform under Martinez?

“The best word I have to describe Dr. Trujillo is thoughtful,” said Edward Tabet-Cubero, director of the Learning Alliance of New Mexico who is also part of a coalition that formed out of the Yazzie Martinez education lawsuit called Transform Education NM.

He said her strengths include supporting community-driven education efforts through her research and a humble leadership style that means she’ll be receptive to the expertise of her deputies and advisers.

“I couldn’t think of a better lineup to lead our Public Education Department than the team that was announced today,” Tabet-Cubero said.

Sen. Bill Soules, D-Las Cruces, has known Trujillo since her early days as a teacher in the Cobre schools and has followed her career. He said she was not the type of leader who would look for a knight to ride in on a white horse, but instead would use a “New Mexico style” to remake schools. He cited her work in quantifying New Mexico’s teacher shortage and bringing Educators Rising to New Mexico and helping it grow to more than 40 active chapter at high schools and colleges throughout the state. It’s a career organization similar to FFA that encourages students to pursue careers in education.

As director of the Southwest Outreach Academic Research Lab at NMSU, Trujillo put out the annual educator vacancy report in New Mexico, which found that in 2018 New Mexico was short 740 teachers, a jump up from 476 in 2017. Trujillo also knows many of the causes: Discouraged new teachers, half who quit the profession within the first five years, and teachers retiring at their first opportunity.

“(Educators Rising) is a recognition that in New Mexico, if we’re really going to get the teachers we need, we can’t count on them coming from other places, we have to start growing them ourselves,” Soules said. “And she’s the one who’s led that program.”

In addition to Trujillo, Lujan Grisham named four PED deputies and the agency’s chief of staff, as well as a consultant to the PED – Pedro Noguera – a UCLA education professor and director of the Center for the Transformation of Schools.

Like Trujillo, all of Trujillo’s leadership team grew up in New Mexico and taught in New Mexico schools. Here is a list of who they are: