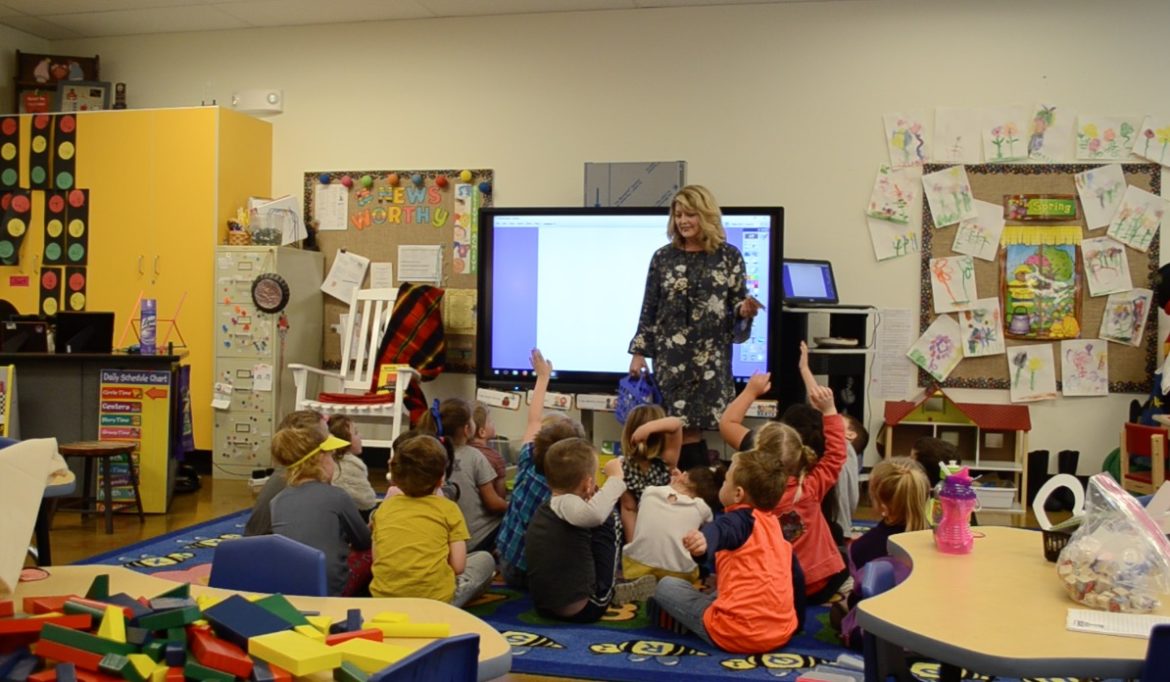 Preschool teacher Teresa Andreis works with her students at Berrendo Elementary School in Roswell. She has started a "First Fridays" group for parents to learn about being their children's first teachers.

Thursday evening, the House of Representatives voted 46-23 to approve a $7 billion state budget proposal, and the single-largest ticket item, no surprise, is public education. With a nearly half a billion dollar increase in spending proposed, the draft budget would funnel around $3.1 billion, up from $2.6 billion this year, into public school districts around the state starting July 1.

The rising tide will lift nearly all boats in New Mexico, according to a spreadsheet that shows the extra funding school districts and charter schools could receive if the proposal clears the Legislature and earns Gov. Michelle Lujan Grisham’s signature.

If you want to see to how much your local district could see in new education dollars, check out the chart we’ve embedded below this story.

All told, school districts around the state would see around a 19 percent bump in State Equalization Guarantee (SEG) money. That’s roughly the amount school districts and charters get per child. The SEG accounts for the bulk of schools’ funding.

Part of that increase will come from a proposed increase in the minimum teacher salaries to $41,000, $50,000 and $60,000 for the three experience tiers. There is also money built into the SEG for 6 percent raises for teachers, administrators and other school workers.

As with most anything, there will be winners and losers.

One area where education observers are noticing big changes is in funding for districts with a high number of at-risk students, the students who were identified in the landmark Yazzie Martinez funding lawsuit as being denied a sufficient education in violation of the state constitution.

Six districts identified in the lawsuit as serving a large number or percentage of Native American students will see increases between 21 percent and 24 percent, according to the state budget proposal. Several districts named as plaintiffs in the historic lawsuit, including Gadsden, Moriarty and Albuquerque, will also see increases over 20 percent.

Rio Rancho, another plaintiff, but one of the wealthier districts in the state will only see a 13 percent boost, with affluent Los Alamos getting a 9.4 percent increase. Rural districts with static or dropping enrollment will see modest jumps in SEG funding.

“The at-risk factor is what provides the biggest increase for the school districts,” said Rep. Patricia Lundstrom, D-Gallup, and chairwoman of the powerful House Appropriations and Finance Committee. In her July 2018 ruling, Judge Sarah Singleton said a large population of the state’s public school students qualify for one at-risk factor. Nearly three of every four come from low-income families. One in seven are English language learners; the same percentage are disabled. One in 10 are Native American.

“And then the other pieces such as PreK-5 are optional. We anticipate most districts will apply for those funds, but the biggest bump is from the at-risk,” Lundstrom said.

Another place where you see differences in funding increases is between charters and regular public schools. Charter schools will see less of the new money. Two proposals to change school funding account for much of the differences. One is a plan to eliminate the extra funding charters get as small schools. Another is a bill that caps the age of an eligible public school student at 22.

Those provisions mean charter school funding increases will range from as little as .5 percent up to 30 percent, with most increases in the single digits or low teens. But several schools that serve adult students may see huge decreases. Albuquerque’s Gordon Bernell charter could lose 60 percent of its funding. Las Cruces’ New America School would see more than one-third of its funding disappear, according to the spreadsheet.

Asked Wednesday whether the additional public school funding will satisfy Judge Singleton’s call for the state to better educate its at-risk students, Lundstrom and Democratic House Speaker Brian Egolf, D-Santa Fe, both pointed to the unprecedented increase in school funding to answer the question.

“We’ve done a very good effort at making sure that what has been identified in the lawsuit is being met,” Lundstrom said. “Do we think we have all the right answers? Probably not. We think we’ve got a very, very good start, a very strong start in trying to meet those needs.”

Egolf sounded optimistic as he thought ahead to Singleton’s April 15 deadline to review what  emerges from the legislative session to see if it meets the state’s constitutional duty to adequately educate all of its students..

“I feel very comfortable that when the hearing occurs in April on the follow up to Judge Singleton’s order that she will see that the Legislature came together in an unprecedented way,” he said  “I will be happy and proud to stand in Judge Singleton’s chambers to tell her we are taking a first step in a multi-year solution to the problems that she identified in her order.”

The budget bill will head to the state Senate. That chamber will have more than two weeks to change the state budget proposal before the Legislature adjourns March 16.

SEG Funding by District by on Scribd