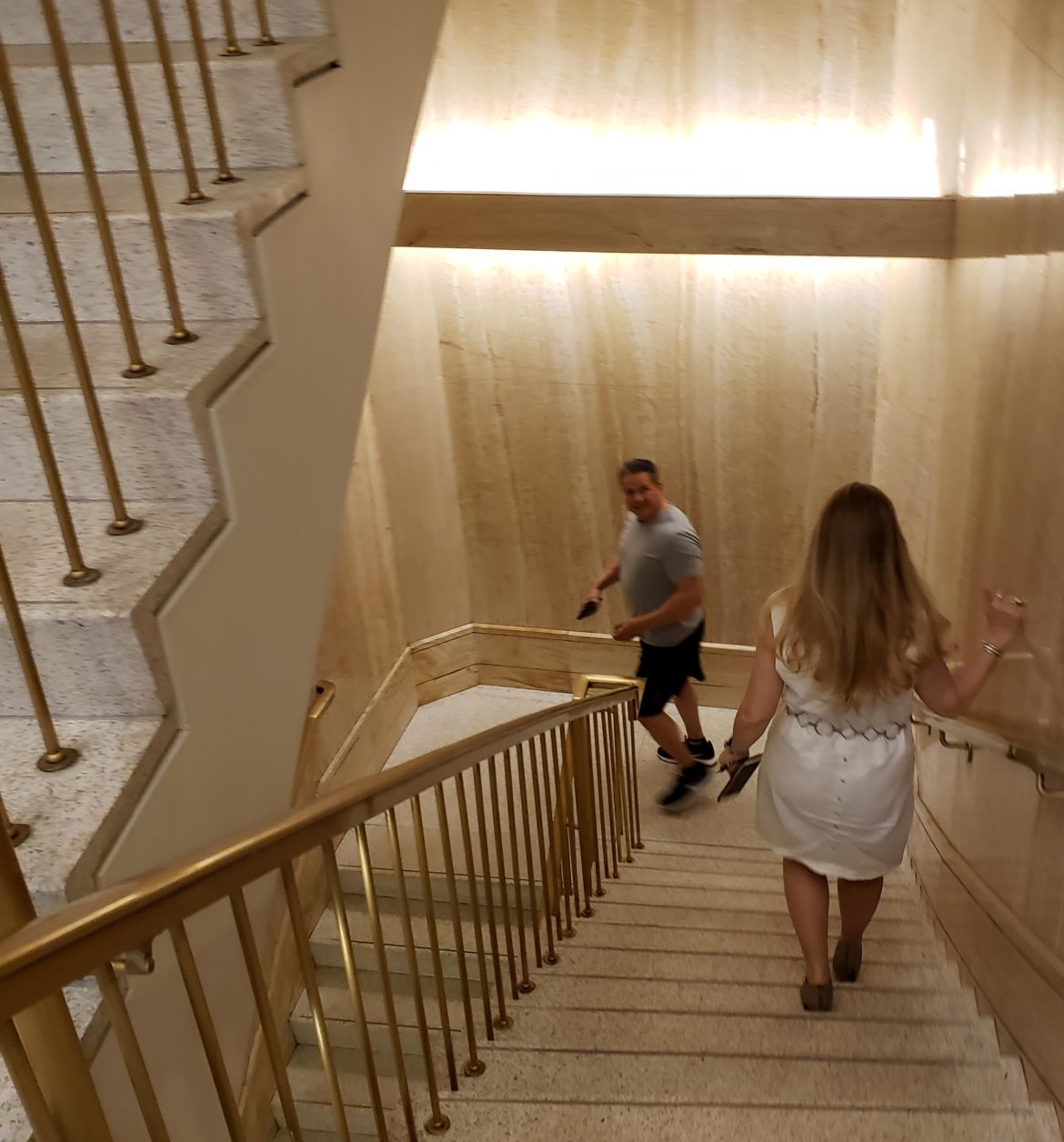 Sen. Greg Baca, R-Belen, at bottom of stairwell, returns from the annual House-Senate basketball game after he and six other senators were called back to the state Senate. Photo credit/ Trip Jennings

Every legislative session, the basketball game between House and Senate lawmakers – a sacrosanct ritual of feel-good joviality – gives state lawmakers a chance to vent steam toward the end of each year’s arduous slog of lawmaking. Perhaps more importantly, it raises tens of thousands of dollars for the UNM Comprehensive Cancer Center.

On Wednesday evening, no one was jovial, and tensions were high, as Capitol police interrupted the annual roundball contest to drag seven senators back to the state Senate to debate a piece of energy legislation.

For the first time in as long as anyone can remember at the Roundhouse, the basketball game had become collateral damage to legislative strife. And a lot of longtime Roundhouse observers were trying to remember the last time something like this had happened.

It was yet another surprise in a surprising session.

Wednesday’s disruption came from an unlikely source – the state Senate, which has earned a reputation over the years for a bipartisan coalition of state lawmakers that often keep the peace, even on the most hot-button issues.

But on Wednesday that gentility seemed strained to its breaking point. The tensions rose throughout the day during an hourslong filibuster by Sen. William Sharer, R-Farmington, who was protesting SB489, a piece of comprehensive energy legislation that is one of Gov. Michelle Lujan Grisham’s top goals in her first session. Sharer had tried to amend the legislation in several legislative committees prior to heading to the Senate floor, in hopes of helping the Four Corners region that likely will lose hundreds of jobs in coming years.

Most longtime observers figured Sharer’s filibuster would wind down in time for the basketball game. Each year, the Roundhouse empties out like a ghost town as lawmakers, lobbyists and staff go to watch the basketball game at the Santa Fe Indian School.

But Sharer kept talking Wednesday. And talking, until it looked like the legislative basketball game might be in  jeopardy.

Adjusting to the situation, the Senate excused seven lawmakers to go play the House in the basketball game, while the rest of the Senate kept working.

At some point, Sharer requested a count of lawmakers in the Senate to make sure there was a quorum. Once the count was done, Sharer was forced to give up the floor in a flurry of legislative manuevers, effectively ending his filibuster.

Sharer protested, but he didn’t win the argument.

Around 8 p.m., Sen. Greg Baca, R-Belen, was seen walking into the Roundhouse in gym shorts and athletic shirt heading back from the basketball game.

It’s unclear if the lawmakers were able to raise money for the cancer center because of the disrupted contest.

It’s also unclear if Wednesday’s strife is a tempest in a teapot or if bruised feelings will carry into the next several days, muddying relationships in the state Senate for the last 10 days of this year’s legislative session.